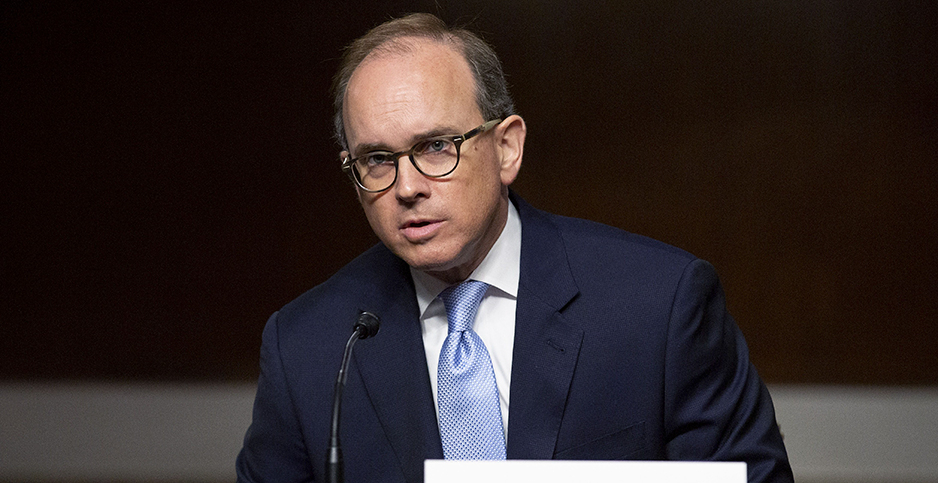 Cory Wilson, nominee for the 5th U.S. Circuit Court of Appeals, during his confirmation hearing. SIPA/Newscom

With the Senate poised to confirm an additional judical nominee this morning, President Trump is on the verge of officially filling all of the nation’s vacant circuit court seats.

Cory Wilson, who is slated to sit on the 5th U.S. Circuit Court of Appeals, would be Trump’s 200th confirmed pick for a lifetime appointment to a federal bench and the 53rd for one of the dozen courts that serve as the last stop for most lawsuits, including challenges on environmental issues.

The Judiciary Committee approved Wilson on June 11 on a strict party-line vote. Many of Trump’s nominees have experienced a similar fate before the full Senate, and Wilson is expected to be approved along a similar margin.

"By the end of my first term, we will have close to 300 federal judges appointed and approved," Trump said during a rally in Arizona yesterday, eliciting major cheers from the crowd.

Those judges’ influence on water, air and energy law will stretch well beyond Trump’s time in the White House.

"We’re going to feel the effect in the environment, voting rights and everything that comes before the federal courts," said Rebecca Bratspies, a law professor at the City University of New York.

Since most cases are first heard in federal district courts, the environmental records of many of Trump’s circuit court picks are still relatively blank slates, legal experts say.

Ben Driscoll, judiciary program director for the League of Conservation Voters, pointed to one recent decision from the 9th U.S. Circuit Court of Appeals, which frequently hears environmental cases, as a sign of what’s to come.

The 9th Circuit, which spans nine West Coast states, now contains 16 active judges who were appointed by a Democratic president and 13 who were tapped by a Republican. Ten were nominated by Trump.

In a 2-1 ruling last month led by Judge Kenneth Lee, a Trump appointee, the 9th Circuit said Oakland, Calif., could not legally block coal exports from moving through the San Francisco Bay (E&E News PM, May 26).

"It’s going to be a whole lot more of an uphill battle — even in a pro-environment administration — to make changes to climate change, clean air and clean water rules," Driscoll said.

The court on which Wilson would sit — the 5th Circuit, which covers Texas, Louisiana and Mississippi — has never been particularly friendly to environmental challenges, Driscoll said. Now the bench is on the cusp of containing six Trump-appointed judges.

"The chance of pulling a favorable panel from the 5th Circuit is slim to none right now," he said.

Driscoll noted that the "overwhelmingly white, predominantly male" list of Trump judges tends to be oriented toward industry interests and might not see the potential for harm in environmental litigation.

When it comes to fighting for environmental justice in minority and low-income communities, Bratspies said, "there’s no place that’s more important to have a judiciary that thinks about the intent of the law and its context."

She continued: "I worry that to the extent we had that in the federal judiciary, we’re losing it."

Though court watchers attempt to read the tea leaves in litigation by looking at the judges who are considering cases, jurists are generally thoughtful, independent-minded individuals whose decisions can’t be accurately predicted by who nominated them, said Ilya Shapiro, senior fellow in constitutional studies at the libertarian Cato Institute.

Trump, for instance, was outraged last week when one of his nominees to the Supreme Court, Neil Gorsuch, led an opinion affirming the rights of lesbian, gay, bisexual and transgender people in the workplace.

But as a whole, Shapiro said, Trump’s picks for the Supreme Court and lower benches are focused on hewing to the text of the law and pushing back on the administrative state.

"Trump’s appointees are going to be more skeptical of agency powers than the nominees of any other president, including Republican ones," he said.

Reining in the power of agencies like EPA to craft stringent rules on the environment and other issues has been a focus for Trump’s picks for another prominent bench.

Before he became a federal judge, Justin Walker, the newest member of the U.S. Court of Appeals for the District of Columbia Circuit, wrote about the effect that Justice Brett Kavanaugh’s addition to the Supreme Court would have for judicial deference to federal regulators. Trump has also placed his former regulatory czar, Neomi Rao, on the D.C. Circuit.

"I don’t think we’re going to see anything as lasting or important from Trump judges than what we’ll see on administrative law and separation of powers," said William Yeatman, a research fellow at the Cato Institute.

The Trump administration’s rollbacks of Obama-era environmental regulations might be more likely to survive if they come before a sympathetic judge, he said.

A potential Biden administration could also work to install its own judges on the federal courts — as soon as vacancies appear.

In the Trump era, that process has been marked by the deterioration of approvals by nominees’ home-state senators, a reduction in the amount of time spent debating appointees and a de-emphasis of American Bar Association ratings.

Some judges rated by the ABA as "not qualified" for their roles have been able to secure seats on the federal bench.

A potential President Biden — or some future Democratic president — could use those lowered barriers to his own advantage to place more liberal judges, Tobias said.

But the end result, he said, could be a system in which it’s impossible to nominate a judge unless both the president and the Senate are of the same party. Tobias noted that people who care about the process would like to see a return to something "more normal."

"Sometimes it seems like a race to the bottom," he said.