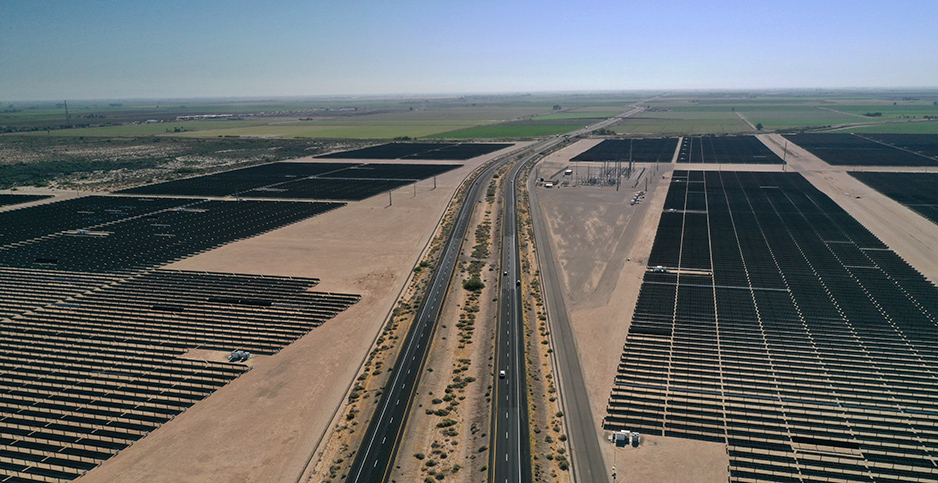 The U.S. electric power industry can reach net-zero carbon emissions by 2050 if it embraces aggressive transitions to green hydrogen and other technologies, according to industry modeling. Bing Guan/REUTERS/Newscom

New calculations by the electric power industry show it can mount the most ambitious carbon dioxide emissions-cutting plan in U.S. history.

While the industry has been reducing its carbon output since 2005, its old plan brought it to net zero somewhere in the 2070s.

The new target is 2050, said Arshad Mansoor, the president and CEO of the Electric Power Research Institute (EPRI), explaining that the industry has to decarbonize roughly twice as fast to reach its goal.

Mansoor, who has a doctorate in electrical engineering, has worked on energy efficiency programs for EPRI since 2007, but only in the past five years has he become convinced that there is a faster low-carbon path.

Last century’s growth in nuclear energy and then the more recent emergence of solar and wind power suggested there might be one.

"Five years ago, there were few electric vehicle models. Soon there will be more than 115," he explained in an interview. EPRI’s economic models now predict that the cost of EV car batteries will drop 50% by 2050 and their energy density will double.

The transportation sector is the largest source of greenhouse gas emissions in the United States, accounting for about 28% of total carbon emissions. Electrifying it will be "a critical task in the global push to drive down emissions to avoid the worst impacts of climate change," according to a report released by the National Renewable Energy Laboratory (NREL) on Monday.

The coming changes, Mansoor predicts, will be electric cars that compete directly with gasoline-powered vehicles on their retail cost. Because EVs have fewer moving parts and cost less to maintain and operate, the result could be a savings of $1,000 a year for families that own an EV "even though you’re paying more for your electric bill."

"It’s almost that you can have your cake and eat it, too," said Mansoor.

He estimates that the electrification of the nation’s transportation system will require the government to help refit many of the 160,000 gas stations with electric chargers. That could expand the reach of EVs to people who don’t have plug-ins at their apartments.

He suggests the precedent for that was set by the rural electrification program mounted by the United States in the 1930s to bring power to parts of the nation that didn’t have it.

"We need to make the case that electrification of transportation is the best way to reduce energy costs and reduce emissions," Mansoor said.

The biggest impact will be improvements in air quality, he asserted, and a reduction in cases of asthma and other illness that cause premature deaths from pollution.

EPRI, which is located in Palo Alto, Calif., was created to help the government with long-term electricity planning. It was formed in November 1965 after a mammoth blackout that affected 30 million people in the northeastern United States for as long as 12 hours. The shock focused Congress on the fact that the utility industry needed more help with regional and national planning.

Electric utilities responded by creating EPRI, an independent research and development organization to fill the planning gap. EPRI currently tests and brings to market clean energy technology and researches the problems of electric grid resiliency and defenses against cybersecurity.

The biggest challenge that Mansoor and other EPRI officials see now is how to fill the innovation gap after 2030 to reach the 2050 goal.

Mansoor believes that energy efficiency, cleaner power and the electrification of transportation will help the industry meet its near-term goals. But, as he puts it, "a fourth tool" will be needed after 2030 if the industry is going to reach net zero, or come close, 20 years later.

The leading innovation appears to be "green" hydrogen, an energy carrier that can be produced with little or no CO2 emissions. During the last six months, 35 U.S. electric utilities, including many of EPRI’s largest members, have set net-zero carbon emission goals by 2050, Mansoor noted.

He sees it as a bet on green hydrogen.

"If somebody told me five years ago that the electric industry would put that much on something that was so far out," he said, trailing off and shaking his head.

But now, he added, there is new industry and government research on how to clean up the conventional process that makes 99% of hydrogen currently used by oil refineries and other industries that need it.

It involves reacting steam with natural gas. Developing an efficient way to capture the carbon emissions from the process, he pointed out, would be a major step toward more green hydrogen.

There are new nuclear plants on the drawing boards that could help utilities make green hydrogen. They are designed to produce and then store heat over 1,400 degrees Fahrenheit in molten salt, when they are not producing electricity.

The application of that much heat would "disassociate" hydrogen from water without the need for electrolysis, creating a cheaper way of producing the fuel.

The resulting hydrogen could be blended with natural gas, reducing its carbon content as a fuel, Mansoor said, noting that the United Kingdom has launched experiments using those blended fuels to power home heating and cooking and even a small town. One potential drawback that needs more research, he added, is that hydrogen appears to make pipes more brittle.

Further out on the research horizon are ideas for "thermal energy storage." These are technologies that can create and then store materials with cooler temperatures for air conditioning in offices and apartment buildings.

According to the U.S. Energy Information Administration, the use of electricity to cool buildings in the residential and commercial sectors of the United States was 10% of total U.S. electricity costs last year. That will rise as the climate warms.

A simple and profitable way to cut costs involves using cooling units that take advantage of cheaper electricity rates at night to freeze ice in tanks. The cool water from the storage tanks is then used for air conditioning during the day.

It also limits the use of diesel-powered "peaker" generating units that most utilities turn on during the hottest parts of the day to meet conventional air conditioning demands.

"We’re trying to think about how you take the thermal storage from yesterday and figure out what it needs in the future," he said.

For those who can afford the upfront costs of ice-powered air conditioning systems in their buildings, the future is now. According to CALMAC Manufacturing Corp., a Fair Lawn, N.J., company that is one of the pioneers of modern ice cooling, its recent customers include Credit Suisse Group AG, Bank of America Corp., DuPont and Morgan Stanley.

That vision is also true for electric utilities and EPRI, Mansoor asserted.

"This is the decade for research intensification," he said. "The [electric power] industry that says they’re committing to net zero by 2050 is putting their money where their mouth is."