How a big Alaska fishing case hooked a solicitor nominee 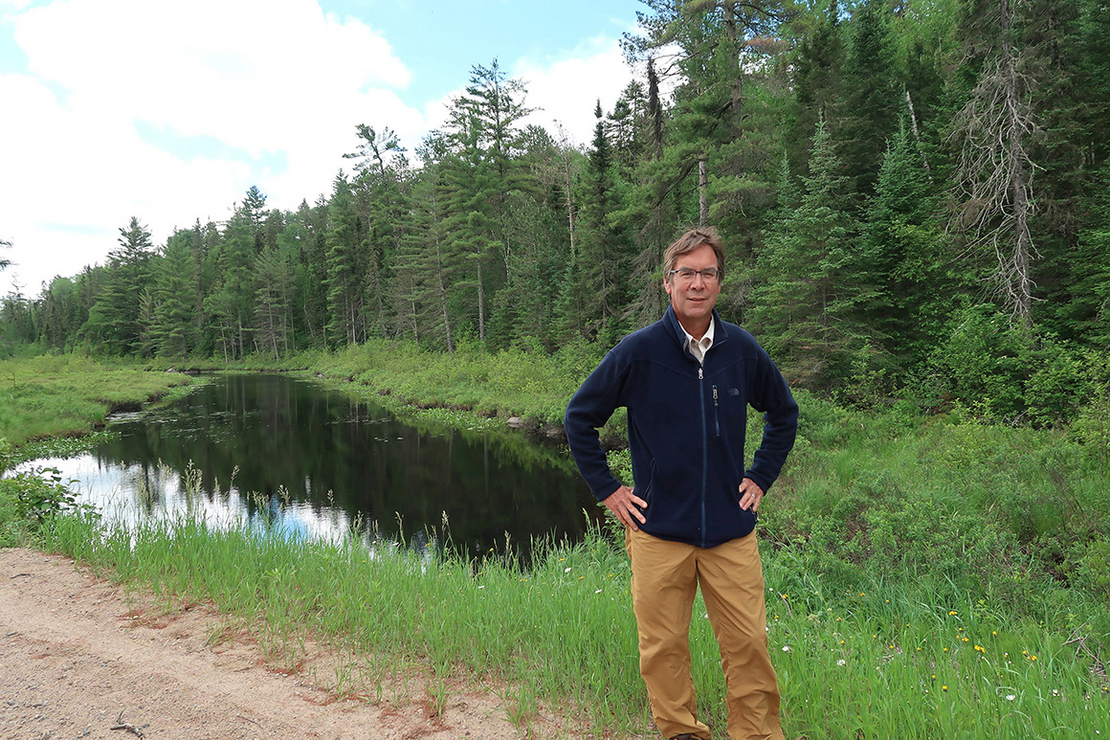 Robert Anderson, President Biden’s nominee to serve as the Interior Department’s solicitor, was approved yesterday by the Senate Energy and Natural Resources Committee on a 10-9 vote. Marilyn Heiman

As a young attorney, Robert Anderson caught Katie John’s case seeking access to the fishing areas in Alaska her people had relied on for generations.

The reverberations are still being felt today, as Anderson awaits confirmation to serve as the Interior Department’s top lawyer.

In the mid-1980s, Anderson was fresh out of the University of Minnesota School of Law. John, born around 1915, was an Alaska Native elder with a beef.

Anderson had just opened the Anchorage office of the nonprofit Native American Rights Fund. He and a colleague set out to work on matters related to tribal status, tribal jurisdiction, and Native hunting and fishing rights.

“I had the gratifying experience of representing … Katie John in her successful battle to secure her subsistence fishing rights guaranteed under federal law,” Anderson told the Senate Energy and Natural Resources Committee earlier this year.

Gratifying, yes, but the battle also lasted nearly as long as the Thirty Years’ War.

From an initial lawsuit filed in 1985, what became known as the Katie John litigation passed through several versions before finally wrapping up in 2013. It ultimately broadened tribal fishing rights, and helped propel Anderson forward in a legal career that has included stints in advocacy, academia and government (Greenwire, May 19).

After squeaking through a Senate committee vote yesterday — his second vote because of a procedural error during the first one at the end of May — Anderson appears poised to take charge of the solicitor’s headquarters staff in Washington, as well as 16 regional and field offices. Overall, the office employs more than 400 attorneys, with divisions covering tribal issues, ethics, energy and minerals, parks and wildlife, land, water, and general law.

Former Interior solicitor John Leshy called Anderson an “inspired choice” for the position. Leshy, who ran the office during the Clinton administration, hired Anderson to work there from the Native American Rights Fund in Alaska.

“He’s very smart, deeply experienced, with a background in both practice and academe, a quick study, a thoroughly decent person who respects the career staff and who listens to all points of view,” said Leshy.

As a practitioner, Anderson served as associate solicitor for Indian Affairs and then as counselor to the Interior secretary for the last three years of the Clinton administration.

As an academic, Anderson taught for 20 years at the University of Washington School of Law and for the past 12 years has also been the Oneida Nation visiting professor of law at Harvard Law School, where he has taught one semester per year.

His students give him high marks.

“He is funny, engaging, organized and clear,” one student wrote on RateMyProfessors, while another called him “great” and said his property law class was “my favorite class ever!”

Anderson is a co-author and editor of two books on federal American Indian law and has penned a number of law review articles that illuminate at least some of his policy preferences (Greenwire, Jan. 21).

One thread: that federal agencies too often fail to respect tribes’ sovereignty and Native Americans’ rights.

"Tribes should be afforded more influence in federal permitting decisions that will affect tribal lands, water and people," Anderson wrote in a 2018 article. "It is not enough to be consulted if the permitting agency is free to reject tribal input subject to deferential judicial review."

Writing in the Harvard Civil Rights-Civil Liberties Law Review, Anderson noted that "tribal input into most projects affecting tribal lands and water is advisory only," and suggested that agencies "comply with a substantive trust obligation to recognize and protect tribal interests."

And in a 2019 Arizona State Law Journal piece, he reflected on the career-defining Katie John litigation.

“This also is a story that will never end, for population pressures, commercial fishing interests, government indifference, and hostility forever have the potential to diminish or undermine longstanding rights,” Anderson wrote.

Anderson was born the youngest of five brothers in rural northeastern Minnesota, near what is now the Boundary Waters Canoe Area Wilderness and the Superior National Forest.

“This is in the aboriginal territory of the Ojibwe people, and I am proud to be a tribal citizen of the Bois Forte Band of the Minnesota Chippewa tribe,” Anderson told the Senate panel in May.

His father worked in an underground iron mine when Anderson was a young child, but the family also depended on tourism. His widowed grandmother operated a rustic family resort composed of seven cabins on the shores of Burntside Lake.

“I’ve witnessed the boom and bust cycles in logging and mining, and the intense local debates over the appropriate balance of conservation and development,” Anderson said.

Since joining the University of Washington law school faculty, Anderson has presented at many dozens of conferences and programs, from a 2000 Washington State Bar talk on water law to a 2020 panel at the University of Colorado Law School on a Green New Deal for public lands.

“These cases, these issues, you know, go on forever,” Anderson said at a videotaped 2012 University of Tulsa symposium on federal American Indian policies.

When Katie John died in 2013, at the stated age of 97, Sen. Lisa Murkowski (R-Alaska) described her as “a piece of Alaska’s soul” and said she was “unafraid to challenge any bureaucrat standing between her native people and their opportunity to fish.”

Murkowski was the only Republican member of the Senate Energy and Natural Resources Committee to support the nomination of Anderson, John’s pioneering legal champion (Greenwire, May 27).

John was an Athabascan elder from the village of Mentasta, population approximately 200. The villagers for years fished for salmon at the confluence of the Copper River and Tanada Creek, at a site now located in Wrangell-St. Elias National Park in south-central Alaska.

But then in 1964, the state closed all subsistence fisheries on Copper River tributaries. After the failure of a 1984 petition to open up fishing to Native people before the Alaska Board of Fisheries, John sued in state court. Represented by Anderson and the Native American Rights Fund, John won.

In 1990, John sued again. This time, she sought to direct the federal government to classify the waters of Tanada Creek and Copper River as "federal public lands." Under the Alaska National Interest Lands Conservation Act, this would extend a “rural preference” to benefit tribes.

“I came to know [Interior] Secretary [Bruce] Babbitt and Solicitor John Leshy through the Katie John litigation as I sought to persuade the government to join the Alaska Native side of the litigation — a successful effort,” Anderson recounted.

In 2014, the related litigation petered out when the Supreme Court declined to review a challenge by Alaska to Interior Department management of the state’s streams and waterways. That left in place a 9th U.S. Circuit Court of Appeals decision upholding Interior’s regulations for managing hunting and fishing along the state’s navigable waters.

“Because of the perseverance of Katie John … other Ahtna people and the larger Alaska native community, their right to fish at a traditional fishing site survives,” Anderson wrote in 2019.

During his confirmation wait, Anderson has already been acting as Interior’s chief legal officer, in the position of principal deputy solicitor.

In the first six months on the job, he has withdrawn six solicitors’ opinions issued during the Trump administration by his Republican predecessor, Daniel Jorjani. Jorjani, for instance, had issued an opinion that the Migratory Bird Treaty Act did not cover accidental or incidental killing of birds. Anderson reversed that position, launching a new reconsideration of the law that will be closely watched by both industry and conservationists.

That cost him GOP support.

"Mr. Anderson has … paved the way for the Biden administration policies that are in conflict with the department’s multiple-use mandate," said Sen. John Barrasso (R-Wyo.) said in late May, before Anderson’s first vote. "Mr. Anderson’s actions have demonstrated that he may not be fully constrained by the laws as Congress has written them."

Jorjani, though, told E&E News that he supports Anderson’s nomination.

“While I disagree with the current administration’s legal and policy interpretations that conflict at times with the varied missions of the Department of the Interior, I think Robert Anderson will make an excellent solicitor,” Jorjani said.

Jorjani cited Anderson’s “decades of experience in Native American law and public lands law” as well as his “significant prior experience serving in the department.”

“He also has a demonstrated track record throughout his career of conducting himself at all times with integrity and professionalism,” he said.