How a climate critic landed in the White House 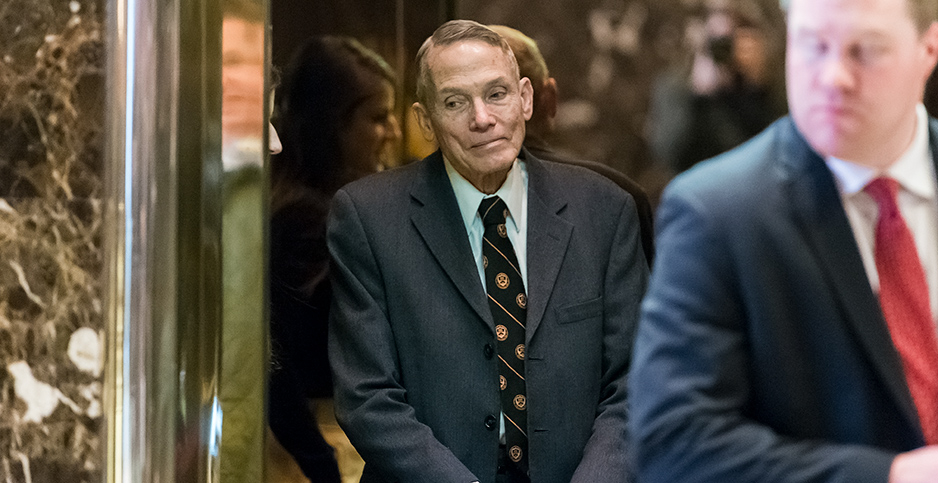 At the dawn of the Trump era, a Princeton University physicist who is currently trying to orchestrate a negative review of climate science within the White House stood on a stage at the Heritage Foundation and recited a poem by Robert Burns.

It turned into a screed against Al Gore.

William Happer struggled against slipping into a Scottish brogue as he read "Holy Willie’s Prayer" from a PowerPoint slide titled "Preening Virtue Signaling" for a crowd of energy company executives, conservative think tank fellows, and consultants who were already shaping energy policy in the Trump administration.

"’Lord, bless thy chosen in this place, for here thou hast a chosen race’ — these are the climate planet saviors," Happer said.

"’But God confound their stubborn face’ — that’s most of you and me in this room," he said.

Happer, who is not formally trained in climate science, intended his rendition to be a humorous interlude in a longer presentation. He claimed that the world needed to consume more fossil fuels because it would lead to a period of abundance for humans. The planet would be greener, crops would be richer, and people in developing nations could be freed from poverty by the expansion of electricity derived from coal.

He didn’t mention that a fight with Gore, the former vice president, once got him fired from a government position.

Now Happer, who serves as a senior director for emerging technologies at the National Security Council, is using alternative science to inform government policy on climate change. Happer is the only person E&E News was able to identify who has briefed President Trump on climate science. His claims contradict the findings of NASA, NOAA and the world’s leading science agencies.

"When you denigrate the scholarship of a scientist, that is an insult," said Michael Bender, a climate researcher at Princeton University and an emeritus geosciences professor who worked with Happer for years. "When you refer to a scientific team as a ‘cult,’ you are damaging that team because they will no longer be trusted by people who trust the person making the claim."

Indeed, Happer’s personal distaste for Gore, and for climate science, made its way from the Heritage Foundation two years ago to a much bigger stage earlier this month. His alternative assertions were evident in the heavily edited congressional testimony of a State Department senior intelligence analyst. Among references removed from the testimony was a mention of dangerous "tipping points" where high CO2 emissions could trigger cascading effects. The changes were rejected by the State Department’s Bureau of Intelligence and Research, and the analyst, Rod Schoonover, used his original testimony.

"’Tipping points’ is a propaganda slogan for the scientifically illiterate," Happer wrote on a leaked draft of the State Department testimony obtained by The New York Times. "They were a favorite of Al Gore’s science adviser, James Hansen."

Happer has a long history of antagonizing Gore, and of questioning government research on human-caused environmental problems. He lost his job as director of energy research at the Department of Energy in 1993 after he went to the White House and told Gore’s staff that the ozone hole and greenhouse gases were not a threat to humanity. He was first appointed to serve in DOE in 1991 at a time when the George H.W. Bush administration was developing climate policy. He worked there when Bush was persuaded by his aides to turn away from addressing climate change. By the end of the Bush presidency, Happer had a reputation for confronting government researchers who raised alarms about climate change. He publicly attacked the head of NASA’s Earth Science Division for suggesting that greenhouse gases could threaten humanity.

Now he’s helping to shape policy. While Trump has downplayed, ignored and criticized climate science, the administration rarely puts forward alternative research of its own. Happer’s edits mark one of the first known occasions of that. The edits, written in part or in their entirety by Happer, touch on conspiracy theories about scientists manipulating data and claim that established climate science is a political talking point by Gore.

"This is not objective testimony at all," Happer wrote. "It includes lots of climate-alarm propaganda that is not science at all. I am embarrassed to have this go out on behalf of the Executive Branch of the Federal Government."

Happer did not respond to requests for comment. Neither did the National Security Council at the White House.

Happer, a successful physicist and an emeritus professor with Princeton University, included a brief biography in his comments. He was born in India in 1939, when it was a British colony. As the Nazis rose to power, his family fled to North Carolina, he said. Not long thereafter, his mother and uncle began working on the Manhattan Project, which developed the first nuclear weapons. In the comments, Happer credits an increase in India’s crop yields in part to a rise in carbon dioxide since that period.

The remarks also preview Happer’s effort to conduct a "red team" review of government science reports. He claims in his comments on the testimony that climate data from NASA has been altered to make warming appear worse than it is.

The data "has been fiddled with to reduce record temperatures of early years and to increase temperatures of recent years in order to give the appearance of alarming warming," Happer claims.

His theory that scientists are involved in a conspiracy to exaggerate people’s role in raising global temperatures is rejected by experts. The National Academies of Sciences, Engineering and Medicine issued a rare rebuke of climate denialism last week. In a statement, the academies’ presidents said the scientific evidence related to human activity and climate change should be "recognized, built upon, and most importantly, acted upon for the benefit of society."

"Scientists have known for some time, from multiple lines of evidence, that humans are changing Earth’s climate, primarily through greenhouse gas emissions," they said. "The evidence on the impacts of climate change is also clear and growing. The atmosphere and the Earth’s oceans are warming, the magnitude and frequency of certain extreme events are increasing, and sea level is rising along our coasts."

Happer has a history of embracing climate science funded by the energy industry or think tanks that oppose government regulations. At the same time, he downplays or rejects the tremendous volume of peer-reviewed research produced and funded by the government. Happer recently pressured NASA officials to remove educational materials about climate change from its websites, according to emails obtained by the Environmental Defense Fund. Earlier this year, Happer forwarded an email to a deputy NASA administrator from someone outside the administration that stated, "I’m concerned that many children are being indoctrinated by this bad science."

NASA did not remove the materials from its website.

The emails also show that Happer is communicating with the Heartland Institute, a libertarian group in Chicago that works to undermine climate science. Happer founded the CO2 Coalition, which says the world needs more carbon dioxide. The group has expanded its outreach to Congress during Happer’s time at the White House by providing briefings for Hill staffers on research that downplays the effects of human-caused climate change.

At the White House, Happer’s plan to review climate science has received pushback by Deputy Chief of Staff Chris Liddell; Kevin Hassett, the outgoing chairman of the Council of Economic Advisers; Larry Kudlow, director of the National Economic Council; and Kelvin Droegemeier, the president’s science adviser, according to sources. Happer has advanced his views anyway. He has briefed Trump on his version of climate science at least twice, and Jared Kushner is supportive of Happer’s plan to review climate science.

In a number of interviews with E&E News in recent years, Happer has expressed anger at environmentalists on the campus of Princeton University, where he’s an emeritus professor. He said that "virtue-signaling" students and others on campus were being duped by the global warming "cult."

It wasn’t always that way. Years ago, at Princeton, Happer was "very open, kind, and almost courtly in the way he treated people," said Bender, the Princeton climate research and former colleague of Happer. He said Happer had a reputation for being cordial and even invited him to talk about paleoclimate to his research group. But starting about 15 years ago, he said, Happer turned more partisan. Now, he said, Happer is focused on damaging the work of his former colleagues and others in the field.

Robert Socolow, an emeritus physics professor at Princeton who has developed modern climate models, is hopeful that Happer could use his influence — and his skepticism — to improve climate science. He said Happer’s skepticism means he could call for a more robust measurement of climate change, even if he casts doubt on whether it’s happening. He said "becoming a participant in history can bring out the best in people."

"A valuable outcome of Will’s significant influence could be a substantial increase in climate science," Socolow said. "Will may be able to argue persuasively for new satellites, ocean probes and ice measurements, as well as an overall broadening of the participation of the scientific community in learning about the Earth."