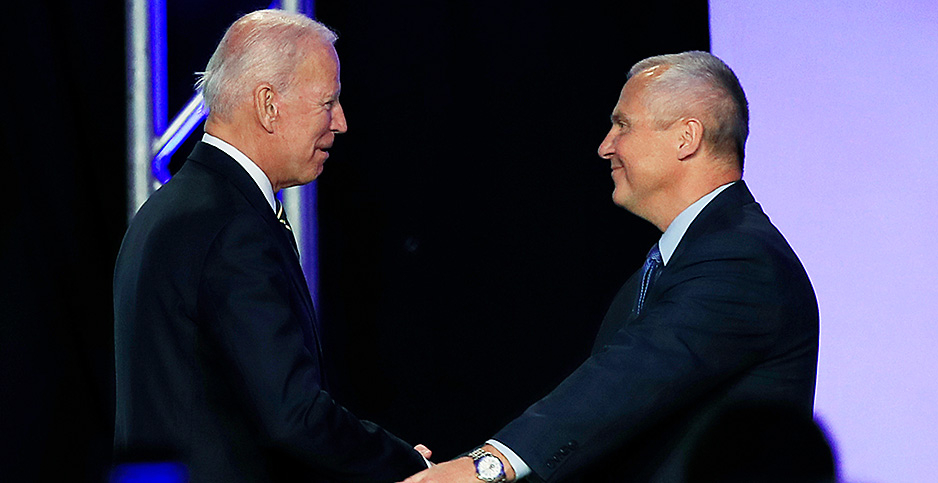 The 2015 rule "posed a significant threat to the IBEW and the jobs of its members who provide many services needed for the operation and maintenance of coal-fired [power plants]," the nation’s largest energy industry union wrote to the U.S. Court of Appeals for the District of Columbia Circuit in September 2019.

Five months later, just after Biden placed a disappointing third in the first-in-the-nation Iowa caucuses, IBEW endorsed him, the first time it backed a candidate before the primary process had finished (Greenwire, Feb. 5).

"People initially thought we were kind of crazy," Lonnie Stephenson, IBEW’s international president, said in a virtual Biden campaign event targeted at Nevada voters last month, referring to the union’s decision to back Biden so early in the process.

"And look where we’re at today. We’ve got the candidate who is the right candidate, the right person at the right time to take this country back. And a lot of it’s going to be with his energy plan."

Now Stephenson enjoys one of the most prominent advisory positions in Biden’s presidential campaign and his transition team, as the former vice president has a strong chance of beating Trump (E&E Daily, Sept. 8).

His role isn’t just about labor; he’s co-chairman of the Climate Engagement Advisory Council, the campaign’s body for promoting Biden’s $2 trillion clean energy plan and other environmental policies, and a top-tier surrogate for Biden on those issues. He’s also played a central role in formulating Biden’s plans.

Stephenson’s embrace of Biden is just one face of an ongoing tension for organized labor unions in the energy industry, which overwhelmingly represent fossil fuel workers whose jobs could be at risk from aggressive climate policies.

Labor movement leaders have mostly rejected Trump and stuck with their historical ties to the Democratic Party, but they aren’t afraid to fight when they think Democrats aren’t fully looking out for their jobs.

Stephenson works to lend credibility to Biden’s claims of millions of new jobs if his proposals are put into place, despite arguments from Trump and others that a full-on attack on fossil fuels would devastate employment.

"He is, in effect, a validator for Joe Biden, that this plan really is about creating union jobs and it really is about opportunities for working people across America," Tom Steyer, the billionaire climate activist who co-chairs Biden’s climate council alongside Stephenson and now counts him as a friend, told E&E News.

"It’s necessary, from a climate standpoint, it’s aggressive, but it’s also going to provide real opportunity and prosperity for working people across this country," Steyer said.

"And I think that he has the credibility and the intelligence and the trust of people in organized labor as a smart person, but also someone who’s looking into the future and can be trusted."

Stephenson has been IBEW’s president since 2015. The Rock Island, Ill., native started his career as a wireman apprentice in 1975 and worked his way up in local, regional and national IBEW circles.

Cecil Roberts, president of the United Mine Workers of America, said he’s known Stephenson for more than two decades.

They’ve worked together closely through the AFL-CIO Executive Council and are now the co-chairmen of the union federation’s energy committee, whose fossil fuel-heavy membership includes the Laborers’ International Union of North America, International Brotherhood of Boilermakers, United Steelworkers and Utility Workers Union of America.

"I really like him. He is one of the most respected labor leaders in the executive council," Roberts told E&E News. "He’s respected by all, and he’s very bright. He spends a lot of time understanding these issues, and he’s very effective at communicating with those in power."

Even though the miners union didn’t endorse in the 2020 presidential race, Roberts said he’s confident Stephenson is a strong advocate and representative of the energy unions.

"If you asked me to pick somebody to be a voice on those kinds of issues, Lonnie would certainly be at the top of my list," Roberts said.

‘Has not let us down’

The alliance between Biden and Stephenson started before the former vice president got into the race. Biden spoke at an IBEW meeting in early April 2019 in Washington, weeks before declaring his candidacy, and hugged Stephenson before his speech.

"I just want you to know, I had permission to hug Lonnie," Biden said at the lectern, joking about recent accusations that he had touched multiple women inappropriately.

The two first met in 2008, when Biden held an event for his unsuccessful presidential campaign that year at IBEW’s Washington headquarters, the union leader told E&E News via email. Stephenson’s Illinois roots tied him to supporting Obama in that primary, he said.

Stephenson chalks up his high-ranking roles in the campaign, at least somewhat, to IBEW’s decision to endorse Biden so early.

After the endorsement, IBEW helped Biden in the Nevada campaign, where he came in second place, which was better than expected, and Stephenson was with Biden in South Carolina for his win there, which propelled him for much of the rest of the primary season.

"I think because of our early commitment and that we are the largest union directly tied to energy policy his campaign starting working with us on his climate change and energy policies," Stephenson said in his email.

"From there I was invited to join his Climate Engagement Advisory Council and most recently to join his transition team," he continued. "I think asking me to join their transition team was to let labor know that they will have a friend in the [White House] under a Biden administration."

Stephenson said IBEW chose Biden because his goals align with its priorities, like having a "reasonable" climate plan, having health care policies that would let its union members keep their current plans and supporting middle-class jobs.

"He has not let us down," Stephenson said. "Biden and his staff are always eager to hear our opinion on the environment, energy, climate, labor, the economy, and many other issues."

Stephenson’s place in the campaign has troubled some progressive activists. The union head has pushed for the continuation of natural gas’s use as an electricity fuel, for nuclear plants to stay open, and for policies to boost "clean coal" technologies like carbon capture and sequestration (Climatewire, Sept. 10).

Stephenson and Roberts led a public letter last year on behalf of the AFL-CIO energy committee denouncing the Green New Deal — which Biden also doesn’t support — as "not achievable or realistic," and slamming its supporters for not working with them on it (Greenwire, March 12, 2019).

And IBEW’s past doesn’t align well with climate activists’ goals, or in some cases Biden’s. The union has, in courts and elsewhere, supported Trump’s Affordable Clean Energy rule, the Dakota Access pipeline, the Keystone XL pipeline, and the Energy Department’s 2017 proposal to prop up coal and nuclear power plants.

In addition to fighting the Clean Power Plan, IBEW has opposed EPA’s 2012 Mercury and Air Toxics Standards and its 2015 ground-level ozone rule.

IBEW also supported last year’s H.B. 6 in Ohio, which subsidized coal and nuclear plants in the state. It was at the center of a massive scandal this summer when the Justice Department alleged then-state House Speaker Larry Householder (R) accepted bribes from FirstEnergy Corp. to advance the legislation.

Stephenson and the Edison Electric Institute gave two union locals in Ohio an award in March for their advocacy toward the law.

Those positions are unacceptable to Oil Change U.S., which has been advocating for Biden to swear off any fossil fuel connections in his campaign, transition and potential administration, with some success.

"Lonnie is heavily aligned with fossil fuel interests. He holds views that are far outside the mainstream of labor folks who want to work in good faith on climate," said Collin Rees, a campaigner with the group, calling ideas like "clean coal" and expanding natural gas use "false solutions."

"There are a lot of concerning pieces to us, and it’s definitely concerning that Lonnie Stephenson is so closely involved in Biden’s policy team and in Biden’s climate advising, while to actual climate activists, folks impacted on the ground, these sorts of folks are not as involved."

Rees acknowledged that Stephenson’s views are in line with energy unions, whose workers are overwhelmingly in fossil fuels.

Other unions, like National Nurses United and the American Federation of Teachers, have come out in favor of aggressive climate policies like the Green New Deal, but energy unions have not.

"Yes, we absolutely need to be working with the building trades. We need to be finding solutions that work for their members," Rees said. "But the energy transition is about a heck of a lot more than those unions."

‘A seat at the table’

Stephenson said IBEW still has many concerns about potential climate policies. But Biden has listened and worked with the union.

"We are not climate change deniers, we know it is happening, we have modified some of our original concerns and Biden has modified some of his positions as well. We believe in a Biden administration we will have a seat at the table as we move our country into a clean environment," Stephenson said in his email.

"He embraced our ideas from the beginning while many others had their minds made up and didn’t really care about our opinions," Stephenson continued. "He knows there has to be a plan to get to carbon free but it can’t happen overnight and there has to be good paying energy jobs created in the process."

"IBEW is being an active and willing participant, pushing forward Biden’s ambitious climate plan, which I think is really positive," said Jamal Raad, campaign director for the group, which has talked with Biden’s campaign about climate policies.

Steyer said unequivocally that Stephenson has not stood in the way of bold climate policies.

"He has been a consistent and strong supporter for the Biden Build Back Better plan," Steyer said. "He is somebody who sees that plan as a huge union job creator."