How a GOP governor could derail New York’s climate law 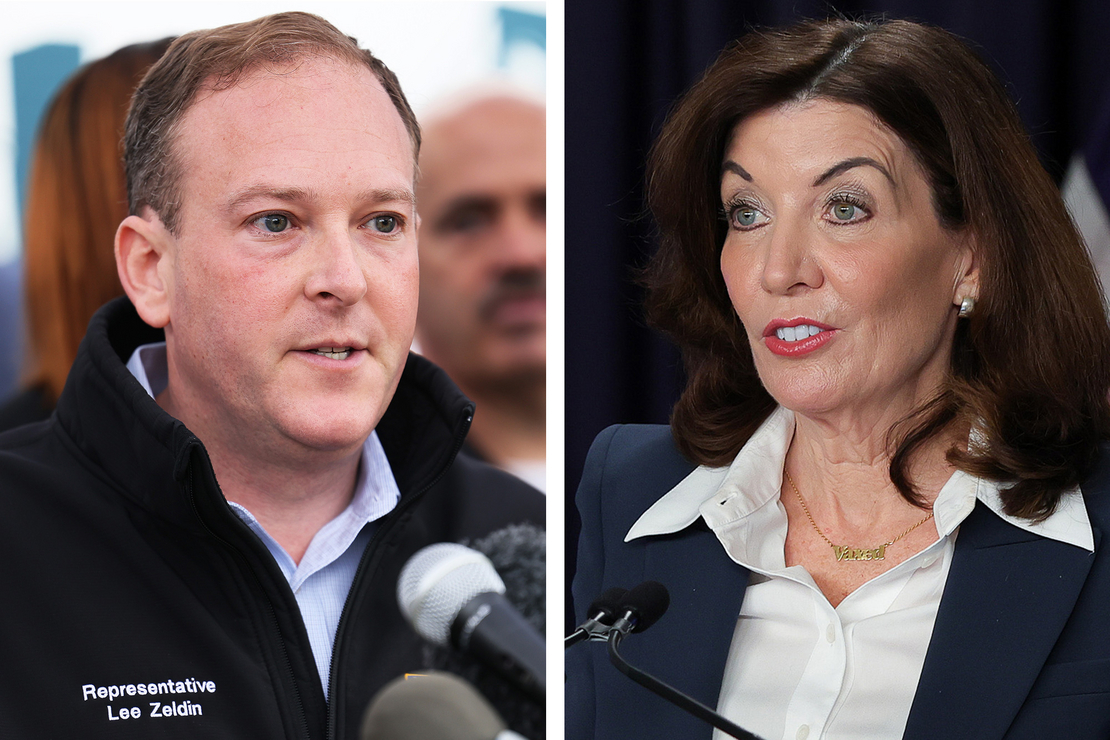 New York has been a national laboratory for aggressive climate policy. But all that could be reversed on election night.

The Empire State has banned fracking, blocked natural gas pipelines, committed to phasing out internal combustion engines for passenger vehicles and passed a climate law that would slash emissions 40 percent by the end of the decade.

Zeldin has mounted a surprisingly robust challenge in the Democratic stronghold of New York, where polls show him within striking distance of Kathy Hochul, the Democratic governor.

A win for the Long Island Republican has the potential to derail one of the most ambitious state climate plans in the country. An advisory panel established by the state’s 2019 climate law is set to issue its recommendations in December for how to put New York on track for a carbon neutral economy. Those will be implemented by the new governor.

Energy and climate have played second fiddle in a race defined by clashes over inflation, abortion and crime. But Zeldin, a Trump ally, has made clear he would pursue a different path than his Democratic opponent — most notably with a pledge to reverse the state’s 2015 ban on hydraulic fracturing.

Climate advocates say legally binding emissions targets passed in the 2019 climate law offer some protection against backsliding in a Zeldin administration. But they concede he could make an already difficult task more complicated.

“Whoever controls the agencies can slow walk it,” said Robert Howarth, an earth systems scientist at Cornell University who serves on the Climate Action Council, the advisory panel created to craft New York’s transition plans.

The gubernatorial election comes at a crucial moment in New York’s drive to green its economy. In 2019, the state passed the Climate Leadership and Community Protection Act. The law commits New York to slashing emissions 40 percent of 1990 levels by 2030 and 85 percent by 2050. The remaining 15 percent of emissions would be offset.

But New York is still crafting plans for how to reach those targets. The Climate Action Council will vote on a final plan to achieve those aims next month. It will then be up to state agencies to take those recommendations and turn them into policies for everything from how to build out charging infrastructure for electric vehicles to electrifying space heating in buildings.

Whoever occupies the governor’s mansion in Albany will be charged with implementing the law. Hochul has touted the legislation on the campaign trail, along with her efforts to boost renewable generation. Zeldin largely has focused on affordability issues and lifting the fracking ban imposed in 2015.

When Hochul called the idea “dead on arrival” in a radio interview over the summer, Zeldin took to Twitter to champion natural gas production in the state.

“Many in the southern tier & beyond are begging for it,” he wrote. “They want to create jobs, revitalize communities & drive down energy costs.”

The Southern Tier, the economically distressed region that borders Pennsylvania, is where the untapped natural gas reserves of the Marcellus Shale field are located.

If Zeldin wins, there is a way for him to lift the state’s fracking ban if he’s willing to threaten the state budget process, said Assemblymember Steve Englebright, a Long Island Democrat who is chair of the New York State Assembly’s Environmental Conservation Committee.

He said state law gives the governor disproportionate power over the Legislature. A governor can put anything into the budget during the annual negotiations process, and the Legislature cannot remove it without voting down the whole budget and having enough votes for an override, he said.

Zeldin would only be able to go so far without legislative support, said Peter Iwanowicz, executive director of Environmental Advocates NY and a member of the Climate Action Council. Rescinding or amending the state’s emission targets would require the approval of legislators. The law will make it difficult for Zeldin to rapidly approve pipelines, cut clean energy expansion or lift the fracking ban.

“He would have to implement the state climate law, and there are a lot of provisions that aren’t negotiable,” Iwanowicz said. “That’s going to be a challenging issue for someone who has such a terrible environmental record.”

But a win for Zeldin would make implementing the law decidedly more complicated. The draft plan crafted by the Climate Action Council envisions the wholesale makeover of New York’s energy system.

Where more than 4 million New York households are now heated with natural gas, it calls for installing 1 million to 2 million electric heat pumps by 2030. The number of EVs on the road would climb from around 100,000 today to 3 million by the end of the decade. And all that new electricity demand would be powered by a massive build-out of renewables.

The need for state planning is particularly evident in transportation, which accounts for 28 percent of New York’s greenhouse gas emissions. EV adoption lags the national average, said Corey Cantor, an EV analyst at Bloomberg New Energy Finance. BNEF reckons EVs accounted for 6.7 percent of new car sales nationally over the first half of the year. By contrast, EVs accounted for 3.75 percent of new sales in New York over the last six months, according to tracking data from Atlas Public Policy.

The state will need a coordinated plan to address issues like charging in New York City, where many residents live in apartment buildings and will need access to on-street charging, he said.

“There has been a lot of target setting. They have big aspirations, but on the EV side, they have to make a lot of progress to hit those targets,” Cantor said.

As difficult as transportation may be, buildings may be even more challenging. Fossil fuel combustion in buildings accounts for roughly a third of New York’s greenhouse gas emissions, more than any other sector of the economy. Heat pumps have only just begun to gain a foothold in the state, with 240,000 using central heat pumps as their primary heating source, according to U.S. Energy Information Administration figures.

Yet the focus on heat pumps will have far-reaching implications for New York’s power grid. Where the state’s electricity demand now peaks in the summer, demand would be highest in the winter in a scenario where electrification of space heating takes hold.

The scale of the build-out has generated concerns among power producers, who worry it could burden consumers’ pocketbooks and jeopardize the reliability of the state’s power grid.

“I don’t think we have had an honest and forthright discussion about reliability,” said Gavin Donohue, executive director of the Independent Power Producers of New York and a member of the climate council. “Everyone wants clean new tech and new innovation, and they want it cheaply.”

How Zeldin might approach the issue is not entirely clear, but he is likely to diverge from Hochul, Donohue said.