How a local ordinance could clog coal exports 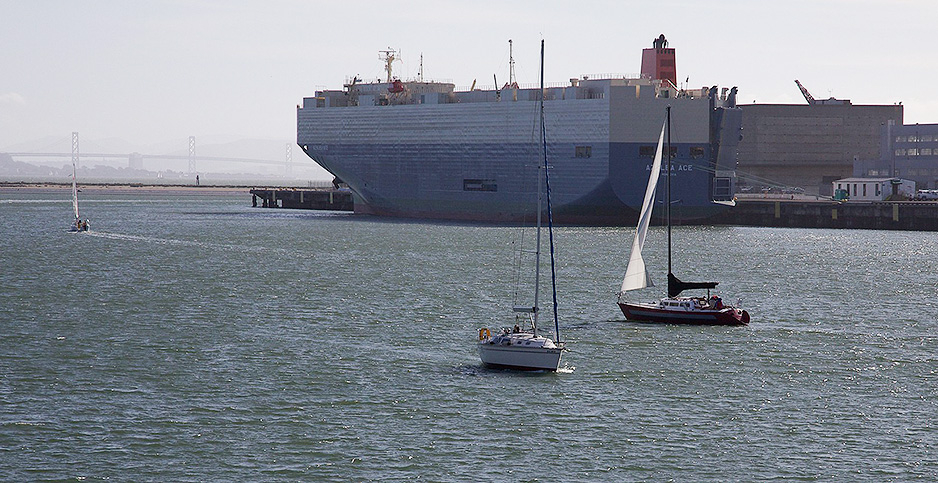 An auto transport ship in the Port of Richmond in California. Richmond city officials are considering a proposed ban on coal passing through the port. David Brossard/Flickr

A local ordinance has plunged a working-class Bay Area city into the national debate over coal exports.

Not all 103 people who signed up to speak did so, but the Richmond, Calif., City Council still heard every local, national and international argument for and against coal exports last night during a nearly seven-hour public meeting.

At the end, Mayor Tom Butt postponed a vote on banning coal storage and handling until Jan. 14.

The ordinance would cut off one of the last viable paths connecting Western coal to growing Asian markets. Averaging 1 million tons annually, the Levin-Richmond Terminal is one of just four U.S. facilities shipping coal directly to Asia.

Less than 10% of U.S. coal exports leave from the West Coast, according to federal data, half of which are train shipments to reach ports in Canada.

Coal companies have been trying to add export capacity to counteract the dramatic loss of their primary customers: coal-fired power plants.

But opponents have leveraged pollution and climate concerns to kill a half-dozen new export projects in Washington state, Oregon and California.

Advocates for the remaining proposed coal export terminals — the Millennium Bulk Terminals in Longview, Wash., and the Oakland Bulk and Oversized Terminal proposal just miles from Richmond — are hoping courts will stop state regulators and local officials who have blocked those proposals.

Similarly, the Levin-Richmond Terminal and its coal supplier, Wolverine Fuels LLC, have both threatened to sue the city if it imposes the ordinance.

Wolverine has few other options to sell the coal coming from its three Utah mines.

Other coal companies control most of California’s limited port capacity.

There is room at ports in Canada and Mexico, but transportation costs undercut already slim profit margins.

Analysts say the U.S. is at best a "swing supplier," meaning prices must be high enough for it to make sense to ship coal all the way to Asia.

Doyle Trading Consultants analyst Andrew Blumenfeld said prices must be around $85 per ton to drive U.S. exports — but the current price sits around $70.

"At this point, if you don’t have an agreement with a better price than that, you’re pretty much underwater," he said.

"Right now we seem to be going through the bottom of the cycle once again," Blumenfeld added. "I don’t see an upward trajectory for 2020 at this point."

The ordinance vote was tabled over objections from Councilman Jael Myrick.

The Richmond council has passed two resolutions to restrict shipments of coal and petcoke, a petroleum refining byproduct, through the Levin-Richmond Terminal.

Councilman Eduardo Martinez said he proposed the ordinance in response to a deluge of local concerns about coal dust.

Other communities that tried to ban coal shipments have run afoul of the federal government’s broad authority under laws enacted to keep trains rolling across state lines (Greenwire, June 15, 2017).

But the Richmond ordinance aims to skirt those issues by regulating the storage and handling of coal, not transportation.

City attorneys argued that local officials have broad police powers over unwanted land uses if there is a rational governmental purpose. Businesses must be given time to comply with any changes, which is why the ordinance would give the Levin-Richmond Terminal three years to find replacements for coal and petcoke.

"If this problem of coal and petcoke were affecting well-off ZIP codes, this issue would already have been taken care of," said Dale Weatherspoon, pastor at the Easter Hill Methodist Church.

Environmental justice has been a common thread across coal export fights, but so has demand for jobs.

Like previous hearings in Washington and Oakland, the packed Richmond hearing room was split between environmental activists and union workers, holding up signs reading, "Are our jobs too dirty for you?"

"When you do something, brother, always make sure you got something to replace what you take it away," one former worker told Martinez.

Levin-Richmond Terminal spokesman Jim Holland said a study commissioned by the terminal found no commodities can replace coal and petcoke.

"The adoption of the ordinance is likely to put the terminal out of business," he said, laying off 62 workers.

"We have companies that need to do better in terms of how they conduct their business," he said.