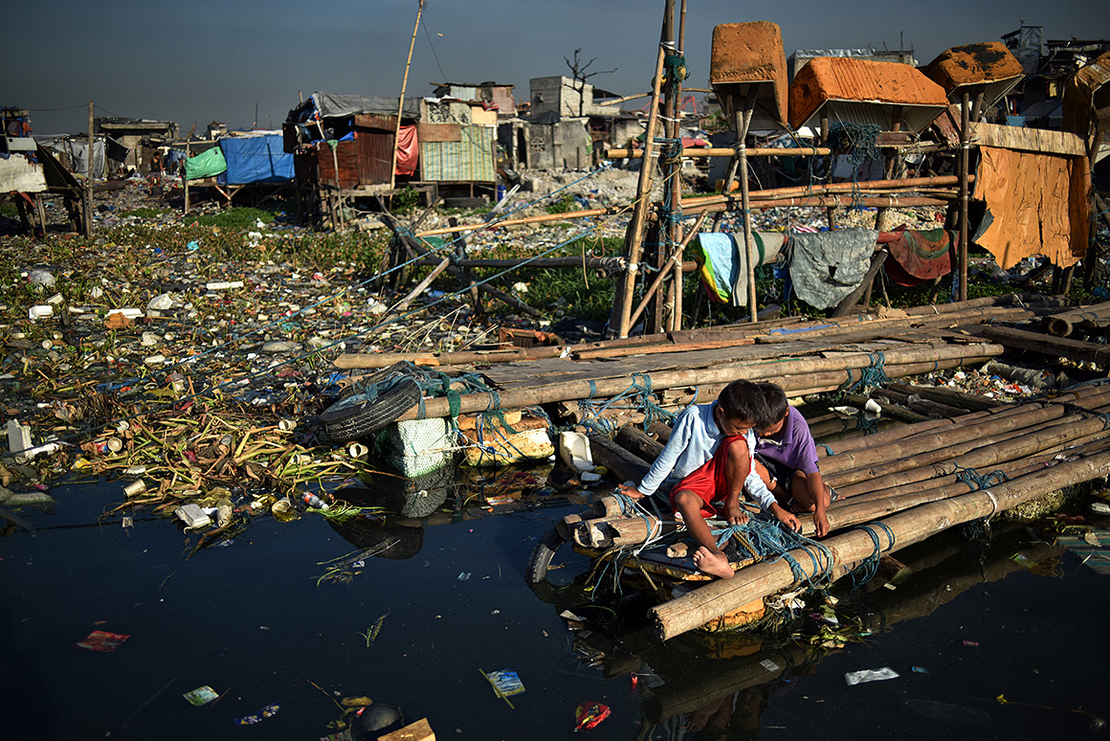 Children sit on bamboo near their house in Manila, Philippines, which is among the most vulnerable nations to climate change. Jes Aznar/Getty Images

For years, fossil fuel companies have engaged in misinformation campaigns aimed at delaying the shift away from the world’s most polluting energy sources.

Now those actions could be used to hold them responsible for the climate harms their operations have fueled. That’s according to a sweeping inquiry by a human rights commission in the Philippines that legal experts say could help shape the future of global climate litigation.

The report, published earlier this month, followed a multiyear investigation by the Philippines’ Commission on Human Rights. The commission found that dozens of investor-owned oil, coal, mining and cement companies had engaged in “willful obfuscation” of climate science to sow doubt and misinformation about climate change and prevent the transition to clean energy.

“All acts to obfuscate climate science and delay, derail or obstruct this transition may be bases for liability,” the commission wrote. “At the very least, they are immoral.”

The report stems from a 2015 petition that civil society groups and typhoon survivors in the Philippines brought to the commission. In it, they called for an investigation into how publicly traded fossil fuel and cement producers have contributed to climate-related damages, which they allege have deprived the Filipino people of access to basic human rights and dignity.

The commission is the first human rights body to investigate companies’ responsibility for climate damages stemming from their operations, but it may not be the last, say legal experts who have followed the inquiry.

“The findings of the commission and where human rights climate litigation is going on the corporate side really shows how we are going to see accountability and corporate responsibility in a different way,” said Joana Setzer, a research fellow at the London School of Economics’ Grantham Research Institute on Climate Change and the Environment.

There could be some stumbling blocks to how widely the findings of the report are accepted. For one, courts in the United States may not give them much credence. The report arrives as oil majors draw in windfall profits and officials push for more drilling (Climatewire, May 4).

And in the Philippines, the new presidential administration — which will be led by the son of a past leader with a record of human rights abuses — may ensure that the recommendations go nowhere. Still, the commission’s findings provide the basis for courts to hold companies liable for climate change. And while the commission itself doesn’t have the power to prosecute companies, the report presents evidence that courts could draw upon, say legal experts.

It could also have a chilling effect.

The commission is essentially saying that any state, anywhere in the world, has the authority to prosecute conduct that leads to human right violations, through the instrument of climate change, said Carroll Muffett, head of the nonprofit Center for International Environmental Law, which provided the commission with an amicus brief.

“And that, I think, should be a wake-up call to the carbon majors companies,” he said.

‘More beneficial than the litigation’

The use of human rights arguments in climate cases is on the rise globally, due in large part to the recognition that it presents a strong argument for action.

It’s not just about how governments or companies should be doing more; it’s about how not doing more is a violation of a protected right, said Setzer, who also leads the Climate Change Laws of the World project, a global database of climate laws, policy and litigation.

“That forced judges to look at the cases in a different way because it was not just one more case about a law not being enforced or clarifying if this means a or b. It’s a case about protecting the right to life,” she said.

More than 100 rights-based climate cases have been filed over the past two decades. But the trend has accelerated in the past five years, with 29 cases alone filed in 2020, the latest year Setzer analyzed the data.

The majority of cases have been brought against governments. But in a historic case last year, a court in the Netherlands ruled that Royal Dutch Shell PLC must curb its emissions, extending the responsibility for tackling climate change to corporations (Climatewire, May 27).

Cases can take years to play out, and even a success doesn’t mean a fix, said Setzer.

The report itself notes that climate change lawsuits are proliferating around the globe, but says the cases have “so far failed to establish judicial consensus on the responsibility of parties.”

A ‘stark warning’ to corporations

The report’s much-awaited publication comes more than two years after the head of the inquiry, Commissioner Roberto Cadiz, announced its findings on the sidelines of climate talks in Madrid.

Some activists who pushed for the inquiry said they wished the report had come out sooner. But legal experts said the way the commission carried out the inquiry could serve as a model for how human rights institutions broaden access to justice in cases that extend well beyond their borders.

Over the course of seven years, the commission conducted a series of fact-finding missions across the Philippines and held a dozen public hearings in Manila, New York City and London in an attempt to get companies in those cities to participate.

It heard from 65 eyewitnesses, some of whom spoke about how climate-fueled storms had destroyed livelihoods or damaged cultural traditions. It also heard from experts who outlined the effect greenhouse gases have on the atmosphere, detailed how climate change is reducing fish catches and agricultural yields, and explored the carbon emissions of individual corporations and their climate change communications. The commission also considered reports from the Intergovernmental Panel on Climate Change and other U.N. bodies.

The result is a 160-page report that details the ways in which climate-fueled weather events deprive people of basic access to food, water, shelter and even life. Many of the impacts stem from severe storms like Typhoon Haiyan, which swept across a series of low-lying islands in the Philippines in 2013, killing roughly 6,300 people and displacing millions.

The report concludes that the companies — which it refers to as “carbon majors” — have known since at least the mid-1960s that their products result in various harms to the climate.

And yet these companies engaged in “willful obfuscation” and obstruction of climate science to sow doubt and misinformation and prevent “meaningful climate action,” according to the report.

Those efforts persist to this date, the commission adds. “Fossil fuel enterprises continue to fund the electoral campaigns of politicians, with the intention of slowing down the global movement towards, clean renewable energy,” it states.

The report finds that the “carbon majors” have a corporate responsibility to undertake due diligence on human rights and provide remediation — and that responsibility extends not just to the immediate companies but to the enterprises in their value chains.

“That’s another stark warning that actors in that sector need to be paying close attention to the climate impacts of their investment portfolios,” said Muffett from the Center for International Environmental Law.

Based on past conduct, companies are likely to downplay the report by saying it was conducted by a non-adjudicative body outside the United States, he said. But courts and governments anywhere in the world, including the United States, are welcome to use the analysis and evidence within it.

A spokesperson for Exxon Mobil Corp. did not address the report, but said in an email that the company has “long acknowledged the reality and risks of climate change, and it has devoted significant resources to addressing those risks.”

Global reach — with some exceptions

Courts in the United States are unlikely to give the report deference. That’s partly because the U.S. judiciary has been less receptive to arguments based on human rights that are included in many other countries’ constitutions (Climatewire, May 13). But even if U.S. courts ignore the findings, the analysis is still salient to the rest of the world, Muffett said.

“And the whole rest of the world looks a lot more like the Philippines than it does the U.S.,” he added.

The report comes at a pivotal time for the Philippines. The commission notes that it was established in the wake of a revolution that resulted in the ouster of dictator Ferdinand Marcos, “under whose rule thousands of Filipinos’ human rights were trampled upon.”

News reports have noted that not much about the younger Marcos’ policies are known because he did not participate in election debates or interviews with independent media outlets.

President Joe Biden congratulated Marcos Jr. on his victory in a call last Wednesday, according to the White House. It said Biden underscored that he looked forward to expanding cooperation with Marcos on a range of issues, including the climate crisis and human rights. The Biden administration has been looking to bolster its ties to Southeast Asia, in part to counter China’s influence. It hosted a summit last week with regional leaders where the United States pledged to invest in clean energy infrastructure, forest conservation and climate solutions.

Some Filipino activists, however, have low expectations for their new president.

“There is little to expect from the government when it comes to addressing climate justice, defending the interests of the vulnerable and marginalized, and fostering fairness across society,” said Yeb Saño, executive director of Greenpeace Southeast Asia, which was one of the petitioners in the case. He characterized the Marcos family as “unyielding with their historical responsibility and persistent evasion of their accountability for their ill-gotten wealth.”

There is room for action, however. A Philippine law already provides grounds for action based on misinformation, according to the report, which provides a list of recommendations for governments, carbon-intensive industries, international bodies, courts and more.

The report also encourages “all courts to embrace their power to influence and inspire government action,” but warns against overreach that chills legislative action. And it notes that “even when courts do not rule in favor of the claimants, they still contribute to meaningful climate response.”

“Judicial contribution to the development of the law and jurisprudence on various climate issues is indispensable to the success of the global climate action,” the report states.

“This case should send shudders and shock waves into the boardrooms of fossil fuel and cement companies which are [brought in] as respondents to this case,” he said. “More climate litigation will be coming their way.”