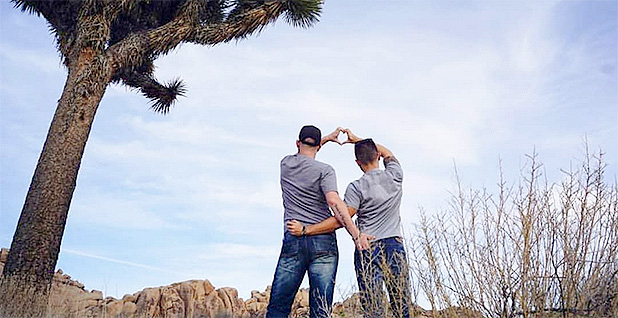 This photo commemorating LGBTQ Pride Month set off a ruckus when officials at Joshua Tree National Park posted it on Instagram. joshuatreenps/Instagram

The photo commemorating LGBTQ Pride Month showed two men, standing next to a Joshua tree, holding up their hands together to create the shape of a heart.

When officials at Joshua Tree National Park in California posted the photo on Instagram this week, it set off an immediate ruckus, reflected by comments posted by gay rights opponents:

"Don’t let the gays follow you into the park — they will convert you." "Let’s see a Christian cross at Joshua tree." "Bigots? No, just normal people who don’t want homosexuality shoved down our throats!"

It all seems a far cry from 2016, when President Obama declared June as National Pride Month, issuing a call "to eliminate prejudice everywhere it exists and to celebrate the great diversity of the American people."

The Interior Department marked the occasion then with a video saluting the LGBTQ (lesbian-gay-bisexual-transgender-queer or questioning) community, urging its members "to explore the wonders of our national parks and historic places."

And the head of the National Park Service went to New York then to dedicate Stonewall National Monument, considered the birthplace of the LGBTQ movement, welcoming it "into the family of the Grand Canyon, Yosemite and the Statue of Liberty, America’s most important places."

This year, there was no proclamation from President Trump and no video from Interior. The National Park Service pointed to a post on its Facebook page, saying the agency is "committed to telling the history of all Americans in all its diversity and complexity."

As of this morning, the Instagram post at Joshua Tree National Park had attracted more than 13,000 "likes" and nearly 800 comments.

Park officials posted an update on their account, urging commenters to tone down their language.

"Please remember that foul language and hateful comments will not be tolerated," it said. "National parks are safe spaces for all."

The post drew plenty of comments from supporters of gay rights, too:

David Smith, the superintendent of Joshua Tree, said the park has found social media to be "a great way to highlight a variety of visitor experiences," with its posts serving as "an invitation to everyone to get outdoors and visit their national parks."

"We believe national parks belong to all Americans regardless of whether they are gay or straight," Smith said. "As stewards of America’s treasures, civil servants welcome everyone to come and enjoy their parks."

The episode shows how the issue of gay rights remains a flash point, even though nearly three years have passed since the U.S. Supreme Court ruled that the Constitution guarantees a right to same-sex marriage.

Jonathan Jarvis, who served as NPS director under Obama, said the agency is "the designated keeper of the American experience through the preservation of both story and place" and seeks to preserve the nation’s most important historical locations.

He said the Stonewall monument came into existence after he asked members of the LGBTQ community to identify the site that had served as "the pivot point" in the gay rights movement.

"There was consensus it was Stonewall," Jarvis said. "I was very excited and proud that President Obama designated it as a national monument and part of the national park system."

Obama even mentioned Stonewall in his second inaugural speech in 2013, highlighting the gay bar that police raided in Greenwich Village on June 28, 1969, helping launch the gay rights movement.

During the Obama administration, NPS also published a study on LGBTQ history and a project on LGBTQ heritage. It noted that, even though they often had been categorized as outsiders, "queer Americans nevertheless consistently played important roles in American cultural life."

Obama issued eight consecutive Pride Month declarations for the month of June, a practice that Trump ended last year, even though he promoted gay rights as a presidential candidate in 2016.

Trump has never explained his snub, but he angered gay rights groups by trying to reinstate a ban on transgender people in the military and appointing judicial and Cabinet nominees with anti-LGBTQ records.

Similarly, Interior Secretary Ryan Zinke drew criticism from gay rights groups for his congressional voting record and for suggesting in a 2016 debate that his Democratic opponent had chosen to be a lesbian.

While he has not said anything about Pride Month, Zinke commended Trump yesterday for declaring June as National Ocean Month.

Interior had no plans to celebrate Pride Month.

"We do not have a video planned," said Heather Swift, Zinke’s spokeswoman. "I defer to NPS on questions related to their activity."

Jeremy Barnum, the chief spokesman for the Park Service, said a number of LGBTQ-related sites have been added to the National Register of Historic Places since 2016, including sites in California, New York, Kentucky and North Carolina.

And he said that during Pride Month, "a number of parks around the country are highlighting LGBTQ stories in a variety of ways, as they have done in years past."

Barnum cited two examples: Stonewall National Monument, which has several postings related to Pride Month on its Facebook page, and a program at the Lincoln Memorial, where the public can hear a park ranger talk about "LGBT figures of the American Civil War," including Mary Walker and Walt Whitman.

"Pretty much what I do is I talk about their careers, their lives and the difference they made in the country," said Matthew Hornberger, the park ranger who’s leading the program at the Lincoln Memorial on four Saturdays this month.

But he declined to weigh in on the administration’s handling of Pride Month.

"These are political questions," Hornberger said. "I can’t do an interview without permission. I’m just basically trying to describe the program."