How a relic could drive future utility regulation in Mo. 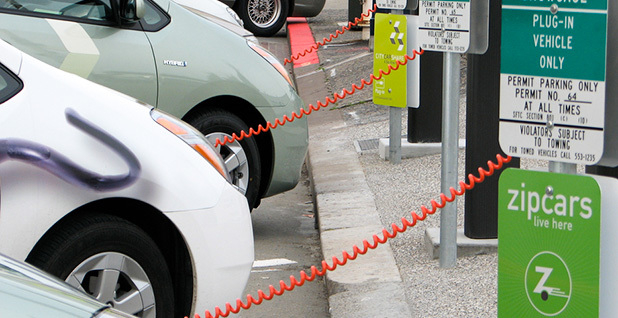 The Missouri Public Service Commission is grappling with how and whether to regulate electric vehicle charging stations. Photo by Felix Kramer, courtesy of Wikipedia.

Could a nearly obsolete technology of the past — the humble pay phone — hold lessons for how utility regulators answer a key policy question about the future of utilities?

The PSC is expected to vote today on an Ameren Missouri pilot project to build and operate six electric-vehicle charging stations between St. Louis and Jefferson City, Mo., in an effort to spark the EV market by helping eliminate so-called range anxiety (EnergyWire, Aug. 16).

The commission has pondered for more than a year how to treat requests by investor-owned utilities seeking to develop EV charging stations and to recover at least a share of the costs from ratepayers.

Last week, the commission asked parties involved in the Ameren case if they believe the PSC has oversight of EV charging, and whether utilities need to obtain specific approval to build and own them in their service areas.

In its answer, the PSC staff said the operation of an EV charging station by a public utility undoubtedly falls within the commission’s jurisdiction.

Telephone companies that operated pay phones within their service areas didn’t need specific authorization for each site. The phones were treated as a utility "plant," and the PSC regulated the rates charged to users.

As telephone monopolies didn’t need specific permission to install a pay phone in their service area, the PSC staff says Missouri law doesn’t require an electric utility to seek a certificate every time it installs an EV charging station in its service area.

"It would be just like putting up a pole or some other piece of infrastructure," PSC Staff Director Natelle Dietrich said in an interview.

California-based ChargePoint, which has more than 1,000 charging ports in Missouri as part of its network, said it is "troubled" by the PSC staff’s assertion that charging stations qualify as an electric plant under Missouri law.

"A provider of EV charging services has more in common with a coffee shop that allows users to plug in to charge their laptop batteries or a cell phone battery-charging kiosk at the airport than with a regulated public utility operating a grid and selling electricity to local businesses and households," the company’s response said.

ChargePoint listed 18 states where, it said, utility commissions have determined that the use of electricity is "incidental" to the provision of EV charging service through a privately owned charging station.

Cost sharing still on the table

Whatever the PSC decides tomorrow, commissioners have made clear they won’t be deciding the thorniest policy question about utilities and EV charging — whether costs of charging stations should be shared among all of a utility’s ratepayers.

Ameren plans to install standard alternating-current (AC) chargers and direct-current (DC) fast chargers at six locations — five of them along heavily traveled Interstate 70. The utility would charge users 20 cents per kilowatt-hour. For DC fast chargers, the cost would be 17 cents per minute.

In an email response, Ameren said yesterday that if approved by the commission, the utility would try to complete one of the six charging islands by the end of the year and then seek a follow-up decision by the PSC on whether the cost would go into rates.

Ameren had requested that the new tariffs take effect by mid-October in order to qualify for federal tax credits.

The company said from its initial filing that the pilot would require other customers to share some of the cost of the $600,000 program. But spread across its rate base, the impact on consumers would be negligible, and in several years, the EV charging infrastructure would cause rates to decline by making better use of the grid.

No matter how much money is at stake, consumer advocates in Missouri remain staunchly opposed to including EV charging infrastructure costs in utility rates.

EV charging involves providing transportation fuels for vehicles and is not within the PSC’s jurisdiction, the Missouri Office of the Public Counsel said in an Oct. 13 filing.

Charging stations don’t fit within the statutory definition of "electric plant" and aren’t necessary to provide "safe and adequate" service at "just and reasonable rates," it said.

"Statistically, this is a blip, and essentially none of Ameren’s customers are even able to use this non-utility service," the filing said. "The 99.86 percent of Ameren’s customers, who will never use this service, should not be burdened with costs for a service from which they receive zero benefit."

Not only would non-EV-owning Ameren ratepayers be subsidizing a service for a small number of those who do own EVs, but they would be helping pay for a service offered to the general public, whether they were customers of the utility or not.

Regardless of the amount of money at stake in the Ameren case, Dietrich of the PSC staff said the decision could establish an important policy precedent in Missouri — one of a number of states studying whether to embed EV charging infrastructure costs in utility rates.

Also pending before the PSC is a rate case filed July 1 by Kansas City Power and Light Co., which is seeking to recover $6 million related to the build-out of its Clean Charge Network, a system of more than 1,000 EV charging sites across its greater Kansas City service area.

KCP&L is also asking the commission to approve tariffs to help recover energy and distribution costs.

The utility began building the network last year. As part of a rate case filed this summer, the utility asked for PSC approval to recover the $6 million needed to build out the Missouri stations as well as approval of tariff to recover energy and delivery costs.

So far, KCP&L shareholders have borne all costs of the $16.6 million network, and sites that host charging stations and automaker Nissan, a partner, are paying for energy used by EV owners.

In Kansas, utility regulators last month denied the utility’s request to include EV charging station costs in customer rates — a decision that prompted KCP&L to halt development of new charging stations in the state (ClimateWire, Sept. 19).

Meanwhile, back in Missouri, environmental groups have sided with utilities, both in the Ameren case and during a broader PSC review of policy issues related to EV charging and investor-owned utilities.

The Sierra Club and the Natural Resources Defense Council filed support of the Ameren pilot with the PSC last week, urging the commission to approve Ameren’s tariff to build and operate the six sites.

While the Sierra Club disagrees that an EV charging station constitutes an electric plant under Missouri law, the facilities would be developed and operated by Ameren Missouri, the state’s largest electric utility. It is therefore subject to commission jurisdiction, the environmental groups said.