How a revised calculation could hurt future climate rules 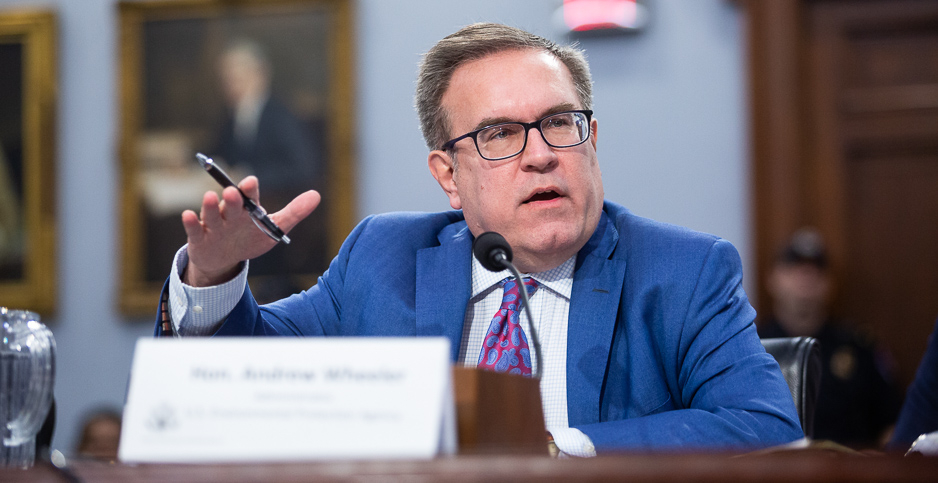 EPA Administrator Andrew Wheeler is overseeing changes to the way the agency estimates the costs of regulations. Francis Chung/E&E News

EPA is on the cusp of proposing changes to its decades-old methodology for measuring costs and benefits in Clean Air Act rulemakings, which if finalized could stymie efforts by future administrations to combat climate change.

The White House Office of Management and Budget is reviewing a draft rule that EPA says would improve the consistency and transparency of regulatory cost-benefit analyses under the landmark environmental law used to limit carbon under both the Obama and Trump administrations.

Meanwhile, an advisory group of experts is vetting separate but related guidance from EPA’s policy office that would direct the agency to find the most cost-effective way to limit a targeted pollutant, even if it did less to curb other emissions.

The aim of both is to bolster cost considerations in future rulemakings while deemphasizing public health benefits — a long-held industry priority that observers say is a legacy issue for EPA Administrator Andrew Wheeler.

"I think it’s a way to slow down or potentially alter future regulations, give them some points to fight over in future litigation. And until such time as the future agency reverses what they’ve done, then it’s still on the books," said Dick Morgenstern, a former EPA official who is now a senior fellow at Resources for the Future.

The Trump administration has been laying the groundwork to revamp regulatory cost-benefit analyses since 2017, but Wheeler abandoned plans for an agencywide rulemaking last May that would apply to a range of statutes.

Instead, he tasked EPA’s assistant administrators with proposing uniform procedures for comparing costs and benefits under individual laws. The only product to date is the air office’s proposal for the Clean Air Act, the landmark law used to regulate everything from greenhouse gases to ozone to hazardous air pollutants. The rule is expected to be final by the end of President Trump’s first term.

The draft that traveled to OMB on April 10 hasn’t been made public, and experts who track it say EPA hasn’t provided details. But most expect it to include changes long sought by industry that would limit how rules get credit for reductions to harmful pollutants that aren’t their stated target.

These so-called ancillary or co-benefits have been counted in regulatory impact statements for decades, and sometimes contribute the bulk of a rule’s benefits. For example, Wheeler was able to tout $730 million in net benefits from the power plant carbon rule that EPA finalized last year because of its modest cuts to ozone and particulate pollution — not to carbon.

The carbon benefits of the Affordable Clean Energy (ACE) rule were minimized in the regulatory impact statement because EPA swapped the more expansive Obama-era estimate related to global climate damage from carbon dioxide for a steeply discounted figure that looked only at the continental United States. That more limited methodology for the so-called social cost of carbon may also appear in the proposal now at OMB.

The outcome would be that future rules will struggle to justify their compliance costs. That could fuel political opposition if future administrations try to promulgate strong environmental protections, or in some cases make it harder to defend them.

"You’re going to make it very, very difficult for EPA to do what it’s supposed to do — what its mission is — which is to protect the environment, to protect public health from pollution, and to fight climate change," said Amit Narang, regulatory policy advocate at Public Citizen.

The co-benefit that packs the biggest punch in Clean Air Act rules is fine particulate pollution, and that could be the main target of Wheeler’s proposed rule.

EPA monitoring stations have been tracking particulate pollution for decades. The link between particulate pollution, or PM2.5, and death is established by epidemiological studies. Its victims are easier to identify than, say, the victims of mercury poisoning or climate change not because the latter are safer but because the causality is more complex and often more removed in time.

The ACE rule isn’t the only climate rule that particulate pollution helped to justify. Its Obama-era predecessor, the Clean Power Plan, claimed that between $34 billion and $54 billion in health and climate benefits could be achieved each year, with avoided deaths largely attributable to less soot, not less carbon.

When EPA proposed the ACE rule in 2018, its own regulatory impact analysis showed 1,400 more deaths under the Trump rule than under the Obama rule because of reduced abatement of particulate pollution. That drew headlines and critical questions on Capitol Hill.

Over the years, fine particles turned the cost-benefit analysis — a practice introduced in an executive order by President Reagan with support from industry — into a powerful argument in favor of regulation.

"I think in large part the fact that more people throughout the political spectrum have embraced it over the years has to do with the rise of particulate matter," said Amy Sinden, a law professor at Temple University.

Formal cost-benefit exercises aren’t mandated by the Clean Air Act, though some of its sections allow for the consideration of cost in setting standards, while others do not.

Still, formal cost-benefit accounting has become a standard part of the rulemaking process in recent decades, and those projections tend to dominate media coverage despite being based on assumptions.

"Cost-benefit analysis is like Al Pacino. It just steals every scene it’s in," said James Goodwin of the Center for Progressive Reform.

EPA’s move last month to kill a 2012 rule limiting mercury in power plants offers some clues about what the draft at OMB might do.

The Obama-era rule to curb mercury and other air toxics justified its $90 billion price tag by pointing to the rule’s massive benefits in avoided particulate pollution. But EPA last month jettisoned those co-benefits and rescinded the Obama-era "appropriate and necessary" finding that supported the rule.

The action on mercury was released a few days after the Clean Air Act cost-benefit rule traveled to OMB after both rulemakings were delayed for several months.

Narang said both rulemakings likely ran afoul of the Office of Information and Regulatory Affairs’ career staff, who resisted EPA’s bid to radically overhaul the way co-benefits have routinely been accounted for in rulemakings.

"Still, someone — and Wheeler is at the top of that list — is trying to deny consideration of co-benefits beyond this administration into either a second term or into a different president," said Narang.

It’s not clear that the cost-benefit rule would survive into a new presidency. For one thing, it’s on track to be finalized very late in this term — likely this autumn or winter. If Democrats won control of the White House and Senate this November, they could use a Congressional Review Act resolution to do away with it quickly.

"It’s the kind of regulation that could be in jeopardy of being overturned if the election doesn’t go in President Trump’s favor," noted James Broughel of the Mercatus Center at George Mason University.

If the election does go Trump’s way and the cost-benefit rule becomes final, that might carry complications, as well. That’s because EPA has been all over the map on co-benefits, rejecting them in rulemakings like the mercury "appropriate and necessary" finding while embracing them when it’s expedient to do so (Climatewire, Oct. 9, 2019).

Co-benefits from avoided particulate pollution supported the ACE rule. And later this spring, EPA is set to finalize rules for oil and gas operations that are expected to argue that methane regulations aren’t needed because the powerful greenhouse gas is captured at wellheads by the same practices and technology used to control an ozone procurer. In other words, it’s a co-benefit.

Goodwin of the Center for Progressive Reform said a final rule marginalizing co-benefits could complicate efforts to defend regulations in court during a second Trump term.

"If they have a finalized rule out for cost-benefit analysis saying the precise opposite of how they did the [cost-benefit analysis] rule, that’s going to look really weird to a reviewing judge," Goodwin said. "If it’s not carefully written, they could be shooting themselves in the foot."

Michael Mandel, an economist at the Progressive Policy Institute, said that despite the apparent inconsistency in how Trump’s EPA had handled co-benefits, the administration’s objectives seemed to be the same whether it was writing rules or combating the coronavirus.

"What the Trump administration is trying to do, both in this rulemaking but also in the way that they’re dealing with this current crisis, is take the human life out of the equation," he said.