How a Sen. Romney could affect the Senate 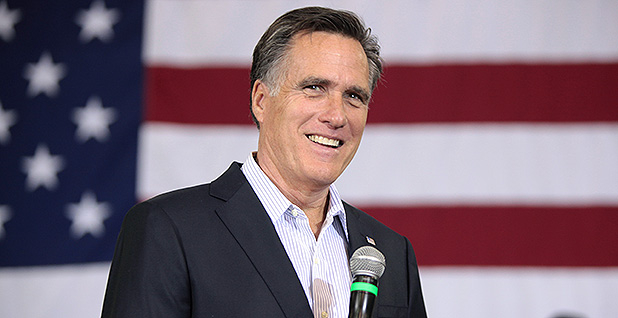 With Utah Sen. Orrin Hatch retiring, former GOP presidential nominee and Massachusetts Gov. Mitt Romney could find himself in the world’s most deliberative body, should he choose to run for Hatch’s seat.

The prospect of Romney in the Senate, a likely scenario, is an encouraging thought for Republican critics of President Trump.

"Romney has shown he is willing to speak out against Trump, both before and after the 2016 election," said Jason Perry, director of the Hinckley Institute of Politics at the University of Utah. "It is clear that Romney will not hesitate to call out the administration when he sees the need for it."

Romney has been one of the few Republicans willing to question the president. During the 2016 campaign, he called the then-candidate a "phony" and a "fraud," urging the party to choose a different nominee. After the election, Romney met with Trump to discuss a potential secretary of State post but was passed over for Rex Tillerson.

After the president refused to condemn white nationalist violence in Charlottesville, Va., last summer, Romney said Trump "caused racists to rejoice, minorities to weep and the vast heart of America to mourn."

But observers caution those who expect Romney to be a strident opponent to the president.

Rob Jolley, a Utah political consultant, predicted Romney’s relationship with Trump will be similar to that of Republican Utah Rep. Mia Love: criticizing Trump at times, but more often advocating with the administration through back channels, compromising when possible and voting with the party on most legislation.

Love is a first-generation American whose parents came to New York from Haiti with $10 between them, according to National Journal. She joined Romney in criticizing Trump’s remarks about certain African countries and Haiti, tweeting they were "unkind, divisive [and] elitist."

Romney’s well-documented shifts on climate issues make predicting his legislative stance on green issues even more of a challenge.

He has also long advocated increased oil and gas production in an effort to increase U.S. energy independence, including drilling in Alaska’s Arctic National Wildlife Refuge.

As a presidential candidate in a competitive GOP primary, he took a modified tone, shifting some of the dialogue to questions of economics as opposed to science.

"My view is that we don’t know what’s causing climate change on this planet. And the idea of spending trillions and trillions of dollars to try to reduce CO2 emissions is not the right course for us," he said during a 2011 fundraiser, according to ABC News.

But since his 2012 election loss, Romney has been fairly consistent: Climate change is an urgent problem demanding action, and humans contribute to it.

"I happen to believe that there is climate change, and I think humans contribute to it in a substantial way, and therefore I look with openness to all the ideas that might be able to address that," he said in a March 2017 speech at Washington University in St. Louis (Climatewire, March 3, 2017).

Assuming he takes something of this tack in Congress, Romney would become one of the most outspoken GOP members on climate action.

It boasts some of the most strident public lands opponents, including Sen. Mike Lee, Rep. Rob Bishop and Gov. Gary Herbert, all Republicans.

During his presidential run in 2012, Romney infuriated environmentalists with a proposal to turn over to the states permitting of oil and gas drilling and coal mining on public lands — a proposal that foreshadowed Trump administration policy under Interior Secretary Ryan Zinke.

Energy industries and public land transfer advocates heaped praise on Romney for the proposal. He received nearly $6 million from oil and gas interests during the campaign, according to the Center for Responsive Politics.

Some degree of support for more local control of — and more industry development on — public lands is almost a requirement in Utah GOP primaries, said Jolley.

"I think his position will be very similar to Mike Lee’s" on public lands, he said. Lee, the junior Utah senator, is one of the most active public lands opponents on the Hill. He has sponsored or co-sponsored more than 20 bills to limit federal control of public lands.

The Utah GOP’s small-government bent could clash with Romney’s job-creation ethos, a constant throughout his political career.

The hard-line national monument stances of Utah leaders sparked a backlash from the outdoor recreation industry, which moved its biannual exposition to Denver from Salt Lake City, citing Herbert and Bishop’s transfer efforts.

The show generated an estimated $45 million in annual direct spending in the state.

Environmentalists say transfer advocates such as Lee and Bishop do not accurately represent public opinion in Utah.

"Outdoor recreation is a huge economic driver for the state of Utah, and we saw outrage when the governor picked a fight with the industry, and they lost the outdoor retailer show," said Aaron Weiss, media director at the Center for Western Priorities.

Utah lawmakers pulled back funding at the end of 2017 for a Herbert-backed lawsuit. The case aims to enforce a law Herbert signed in 2012 calling for transfer of most of the 34 million acres of federal lands within Utah boundaries.

Romney’s economic preoccupations, along with his track record of calling climate change a threat, could push him to embrace conservation, Weiss said.

"He generally speaking has been a realist when it comes to climate change," he said. "It poses an existential threat to Utah’s recreation economy."

Utah’s relationship to the president would give Romney some leeway as a Republican critic of the Trump administration on public land and other issues.

Trump won the state in 2016 with 45 percent of the vote, his lowest total in any state he won. Independent Evan McMullin — like Romney, a conservative Trump critic and a Mormon — took 21 percent of the vote. By contrast, when he was the GOP nominee in 2012, Romney carried the state 73 to 27 percent over President Obama.

A Morning Consult poll released in October showed Trump’s disapproval rating in the state at more than 40 percent, a high figure for a red state — the president had a 52 percent approval rating.

Polling shows Romney is decidedly more popular in Utah than Hatch, who has worked in lockstep with the president so far. A new Salt Lake Tribune poll released on Tuesday showed him trouncing a likely Democratic opponent, Salt Lake County Council member Jenny Wilson, 64 percent to 19 percent. Local reports in Utah said yesterday Romney could make an announcement as soon as next week.

If Romney reaches the Senate, as expected, he would not face re-election until 2024, the end of a possible second term for Trump. Secure in his home state and with an established political record, Romney would have less need than most for support from the White House or party leadership, even as a freshman senator.

All of this positions Romney as one of the more independent lawmakers on the Hill — if he wants to be.

"Mitt Romney is in the unique position where he will not be forced to vote along party lines as a freshman senator," Perry said. "His experience and reputation will allow him to counter party leadership when he disagrees and be a powerful advocate when he does."