How a smarter grid can prevent blackouts 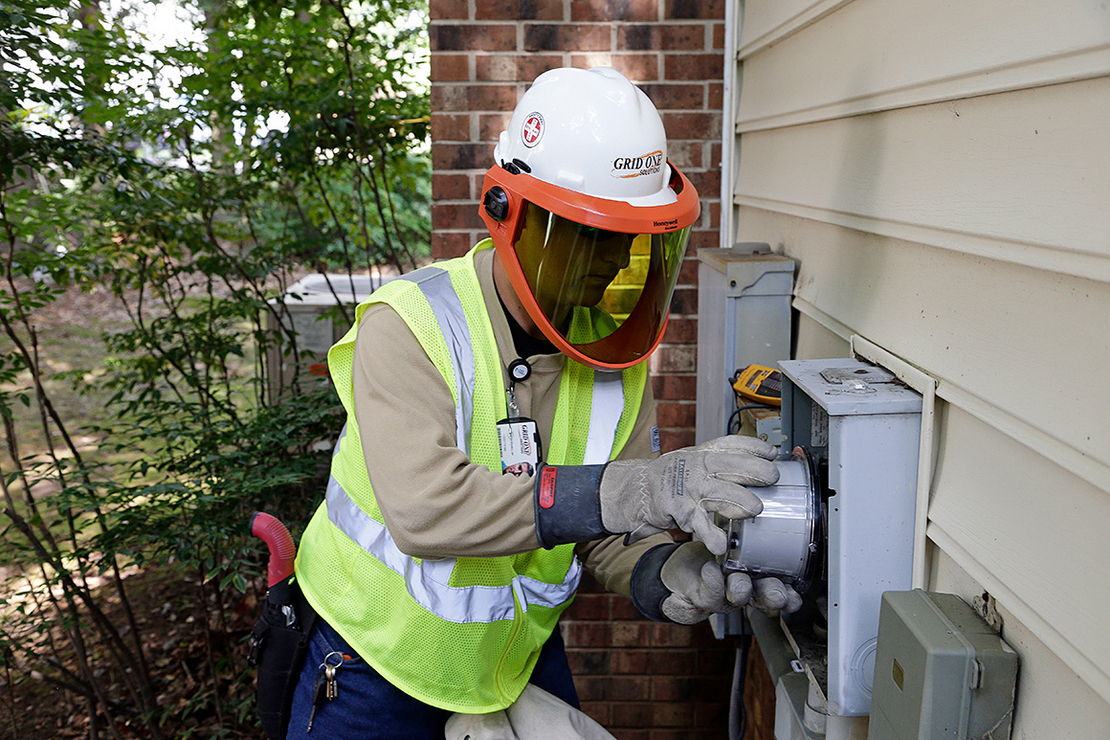 A worker installing a smart meter in North Carolina in 2018. AP Photo/Gerry Broome

As the grid strains under the weight of climate change and new sources of demand, one important way to prevent blackouts comes from an unlikely location: your house.

The issue was highlighted in a January report from Pacific Northwest National Laboratory that said customers’ major energy resources, if synchronized with utilities’ control centers, can be “shock absorbers” helping balance power supply and demand in grid emergencies such as California’s 2020 rolling blackouts.

In the past, California customers have responded voluntarily to officials’ pleas for electricity conservation. That won’t be good enough in the future, the new analysis said. And the need for strategic power use will only grow as the amount of customer-owned solar panels, storage batteries and EV charging rises, it added.

“We’ll quickly get to a point where the number of devices and the variability of generation and load will drive a need for better coordination,” said Hayden Reeve, an author of the report and senior technical adviser at PNNL.

Instead of static customer rates that remain the same regardless of changing demand and wholesale power prices, U.S. utilities need “dynamic” rates that vary with demand, rewarding customers with lower costs when they shift energy use to overnight hours, for example, when power is typically cheapest and often cleanest, the researchers said.

But dynamic rates have faced persistent resistance from utilities, regulators and customers in most of the U.S. over more than a decade, government and private think tank studies have found.

Most of the industry “is moving at glacial speed” on dynamic rates, said Ahmad Faruqui, an economist who retired from the Brattle Group in December after more than a decade spent promoting the value of dynamic rates (Climatewire, June 23, 2010).

“It’s a mark of shame for an industry that claims to be on the cutting edge of change,” added Faruqui, who has advised utilities in 23 U.S. states and a dozen countries on the need for time-based power rates. “It’s almost as if they’ve taken an oath behind the scenes to not modernize.”

The Federal Energy Regulatory Commission in its annual review of advanced meter deployment blamed regulators for the slow growth of dynamic rates.

“Even as the number of customers participating in demand response programs grows, regulatory barriers to customer participation continue to exist,” the commission’s report concluded.

The resistance comes from all directions, Faruqui said. State regulators are wary of political pushback when they increase consumer rates. Utilities also fear a backlash from customers who may find the time-of-use rates confusing and threatening. Utilities’ greater worry may be a loss in revenue as consumers’ power use is trimmed, he added.

Smart meters became a hot topic at the start of the Obama administration. The 2009 economic recovery legislation contained $3.5 billion in Department of Energy awards for grid modernization, and matching grants streamed out the door to help install 18 million smart meters, versus just 2 million in place in 2007.

Now, more than 103 million U.S. homes and businesses have smart meters, 65 percent of all meters, according to the U.S. Energy Information Administration. The devices help utilities to quickly identify where power has been lost in storms, allow for automatic customer disconnects and reconnects, and enable advanced energy management.

But in contrast to the spread of smart meters, just 12 million U.S. residences and business customers were on dynamic rates in 2020, according to an annual EIA survey of utilities.

Annual greenhouse gas emissions could be cut by over 100 million metric tons by 2030 through increased energy savings in homes and businesses enabled by smart energy use strategies, according to the Brattle Group report last year, “The Customer Action Pathway to National Decarbonization.” It is the quickest and simplest of the short-term clean energy options, the lowest of the low-hanging fruit, the study concludes.

Faruqui, a co-author of that report, said the barriers were spelled out to him at a 2010 energy conference in Colonial Williamsburg, Va. He said he asked a high-ranking executive of what’s now Dominion Energy Inc., Virginia’s largest electric utility company, why it wasn’t pushing for dynamic rates.

“We would love to do that, but the commission doesn’t want us to,” Faruqui said he was told.

So he went directly to a senior official of the Virginia State Corporation Commission, also attending the conference. “How come you guys don’t want this?” Faruqui asked.

The official said, “How can we have it if the utility doesn’t propose it?” Faruqui recalled. “That left me dumbstruck.”

Eight years later, in 2018, and again the next year, Dominion proposed major investments in smart meters. Twice the commission said no because the utility had not advanced a credible plan for dynamic pricing.

In 2020, the state Legislature enacted the Virginia Clean Economy Act, which called for a major expansion of consumer-owned energy resources that could be grid-connected. That year, the Federal Energy Regulatory Commission approved Order 2222, aimed at removing competitive barriers to small-scale, customer-owned energy and storage resources.

Following these new policy actions, Dominion last year proposed its third smart meter campaign, to put 1.1 million devices on its system at a cost of $198 million, adding a pilot time-of-use rate plan as a precursor to new systemwide dynamic rates. This time the commission said yes, in a January decision citing the utility’s new rate plan.

The PNNL report outlines a much bolder strategy of connecting customer resources to utility grids in what it calls “transactive” relationships. The new partnership “puts the customer in control of how much or little they participate, and fairly compensates them for the level of flexibility they provide to the grid,” the report said.

Once customers signed up, their “smart” thermostats, EV chargers and other connected resources would be scheduled to respond to forecasts of wholesale electricity prices to reduce overall power demand and costs, while meeting customers’ preferences, PNNL said.

The researchers created a computer-based model of their proposal based on the system managed by the Electric Reliability Council of Texas, the state’s main grid operator. The computer program simulated data from 100 power sources, 200 distribution and transmission systems, and 60,000 homes and businesses with their energy-consuming appliances.

Automated customer-utility connections resulted in load shifting by customers that reduced peak demand by 9 to 15 percent, or the equivalent output of 180 coal-fired power plants, PNNL said. That energy savings could be worth up to $5 billion annually in Texas alone and up to $50 billion annually if deployed across the continental U.S., according to PNNL.

“While this concept may seem futuristic, it is quite possible to accomplish and is already being deployed in a demonstration project in the city of Spokane’s Eco-District,” a PNNL news release said.

“There is increasing interest and definitely an awareness that it is going to happen, and a lot of utilities would rather get ahead of it in a positive way,” PNNL’s Reeve said. “And there are other utilities that will have to be told to do it.”