How a transformer shortage threatens the grid 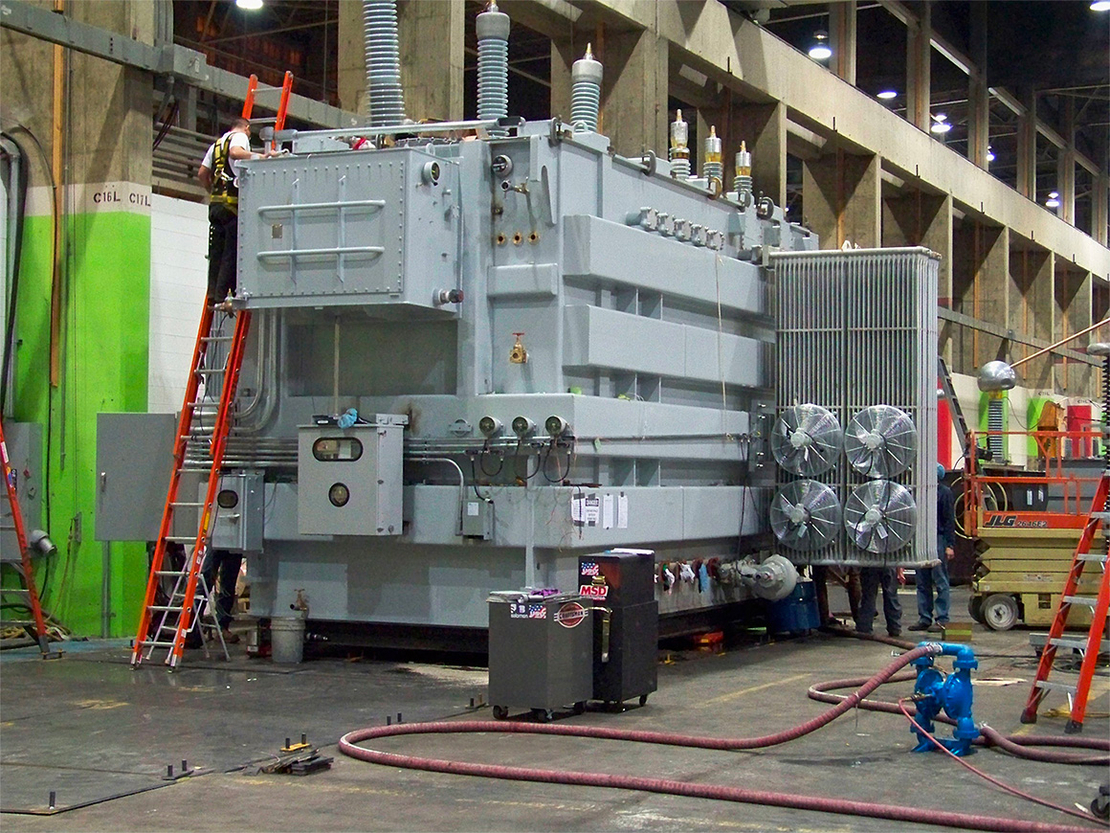 ROANOKE, Va. — A high-voltage grid transformer as big as a railroad boxcar sits on the loading dock of a factory here, ready to push power across transmission lines as an indispensable part of the nation’s electric grid.

The Virginia Transformer Corp. will ship 550 of these transformers this year and expects to produce 665 next year from its plant here and three other North American facilities. But it is one of only eight companies in the United States able to manufacture the nation’s largest transformers — and deliveries have fallen way behind schedule amid the Covid-19 pandemic.

Indeed, the United States is undergoing a shortage of a range of transformers — spanning smaller, pole-top units on city streets to Virginia Transformer’s massive units — for reasons that vary depending on the equipment. That means utilities could struggle to add enough new wind and solar generation to meet the country’s net-zero goals and to keep the lights on when storms damage their depleted transformer stockpiles.

On Wednesday, public power and cooperative utilities sent a letter to Energy Secretary Jennifer Granholm emphasizing the crisis and asking the Department of Energy to use funding from the new climate law to boost U.S. production of smaller transformers. Orders for distribution transformers, they said, now take an average of one year or more to arrive.

“If we don’t act today, we risk being unable to recover from a storm tomorrow,” wrote the leaders of the American Public Power Association and the National Rural Electric Cooperative Association. “In the longer term, it could mean being unable to meet the electrification goals envisioned by the Biden administration. In the meantime, the backlog for distribution transformers continues to grow.”

DOE did not respond to a request for comment Wednesday.

The problem has been growing for years, with federal agencies sounding the alarm under both the Trump and Biden administrations. A 2020 Commerce Department report worried about U.S. import dependence, while this year’s DOE report stressed the need for transformers to build a zero-carbon grid.

The DOE report concludes that the supply of new transformers must multiply dramatically if the nation’s grid is to fill up with new wind and solar generation and EV charging. DOE and Commerce also warned that transformer supply is a national security issue — even without the added pressure of a clean energy transition.

Most transformers now in operation in the United States are near or past their designed lifetimes; extreme storms are hitting grid infrastructure harder, depleting transformer reserves; and the Covid-19 pandemic disrupted supply lines for components, doubling delivery times in some cases (Energywire, Aug. 22).

Synchronized to work together over multistate networks, large transformers handle output as high as 765 kilovolts — or 750,000 volts — from fossil fuel power plants and solar and wind farms. At the end of the line, transformers step down power output until it reaches the 240 volts standard for safe delivery to households.

North American utilities bought 1,300 transformers in 2020, according to an analysis by Global Market Insights cited in the DOE report. The estimated demand in 2027 will be more than double that amount.

Almost two centuries ago, British scientist Michael Faraday demonstrated a transformer’s unique capability by coiling loops of insulated wires around an iron bar, then wounding a second insulated wire on top of the first.

That basic technique remains the operating principle of transformers today.

Pittsburgh industrialist William Stanley called it a “complete and simple solution for a difficult problem” — and used it to build the first commercial transformer a half-century after Faraday’s discovery.

However, the simple solution requires demanding precision by skilled, painstaking crafters, as was clear on a recent tour of the Virginia Transformer plant.

Like other transformer plants, the Roanoke factory holds expensive, advanced equipment, including computer-directed cutting machines to turn out transformer cores of laminated steel.

But production still relies on people, 136 years after Stanley’s transformers were built in an era of horse and buggies. Assemblers must be meticulous as they wind and secure the long coils of insulated copper wire that do the transformer’s work.

“It’s a lot of manual labor, but it’s almost an art form, the delicacy of it,” said Ed Castile, Alabama’s deputy secretary of Commerce for workforce programs. His department closely supports the Hyundai Power Transformers plant in Montgomery, Ala.

On a recent day at the Roanoke plant, assemblers were hand-setting spacers between wires and tying sections of wiring together carefully with nylon string, like anglers attaching a lure.

“The design is very specialized,” said David Roop, an adjunct professor at Virginia Tech who procured transformers for Dominion Virginia Power in a prior job.

A transformer’s wiring must be secure enough to stay in place when disrupted, Roop said. When a tree hits a power line, for example, the disruption to the power flow creates extreme magnetic forces on the windings. If they shift position, then that could interfere with cooling oil flows that prevent destructive overheating.

The wiring thus requires expert engineering design — and assemblers who can build to those exacting specifications. The result, Roop said, “truly is craftsmanship.”

To reach the Biden administration’s goal of a zero-carbon grid by 2035, U.S. generation capacity would have to triple compared to its 2020 level, according to a recent report from the National Renewable Energy Laboratory. Power line capacity nationally would have to double or triple.

That deployment would have to be matched by more transformers, which in turn would require tripling the sector’s current workforce of about 15,000.

But U.S. manufacturers say that’s a major challenge. Companies laid out the problem in their responses to a Commerce Department survey cited in the 2020 report: High schools don’t train students in the welding, coil winding and transformer testing necessary, and few universities offer programs for engineers in power electronics, electrical design and quality assurance.

Virginia, Alabama and other states are trying to narrow the gap with state-backed training programs, while manufacturing unions offer apprenticeships. Castile’s Commerce Department in Alabama has teamed up with a developer of virtual reality software that allows job applicants to simulate work on transformers.

But staffing up manufacturing facilities throughout the energy sector is a challenge.

Next month, Virginia Transformer will open a new production line in Troutville, a dozen miles north of Roanoke, where it will make high-capacity charging stations for electric vehicles. Operations manager Barry Link described his scramble this summer to recruit employees for the new venture.

Link and his team posted yard signs around Troutville and on bulletin boards in Family Dollar stores, gas stations and convenience stores, touting the opportunity to reach an annual salary of $60,000 within three years. The company promised to pick up new workers at several meeting places around the county every day in vans equipped with snacks.

He brought 20 new employees on board, aged 18 to 71, enough to open a first shift next month, he said.

For transformer manufacturing, some are calling on the government to boost wages to ensure enough recruitment. In their Wednesday letter to Granholm, the presidents of the American Public Power Association and National Rural Electric Cooperative Association urged DOE to establish a $220 million wage subsidy program. That would “assist manufacturers in attracting and retaining more workers, thus enabling them to move to 24/7 operations,” wrote APPA President Joy Ditto and NRECA President Jim Matheson.

They also called on DOE to use funding from the Inflation Reduction Act to support training a larger transformer workforce.

Right now, Castile said the best training for new hires still comes from those who do the work now. At the Roanoke plant, quality supervisor Reza Esmaeili agreed. New employees get a three-month introduction in assembly, he said, “and after that, it’s still learn, learn, learn.”

Even with workforce challenges, Virginia Transformer has increased its output at factories it owns in Pocatello, Idaho; Rincon, Ga.; and Chihuahua, Mexico. Hitachi Energy also announced this month that it would spend $37 million to expand its transformer plant in South Boston, Va., to power demands from renewable energy sites, cloud computing, bitcoin mining and data center operations.

But the 2020 Commerce report found that U.S. transformer manufacturers at the time could not compete with global manufacturers in price, partly because of high labor costs.

“The cost is the issue,” said Prabhat Jain, Virginia Transformer’s owner, chief executive and chief technology officer. “We have to be able to compete with the rest of the world” in materials and labor.

Virginia Transformer and other U.S.-based manufacturers supply less than 20 percent of the annual demand for transformers, according to this year’s DOE report. In recent years, China, India, Taiwan and South Korea have manufactured transformers far more cheaply. Canada, Mexico and Europe also have a cost advantage, according to the 2020 Commerce report.

“We need to have government support so we don’t get the rug pulled from underneath us,” Jain said. “That is going to be the challenge.”