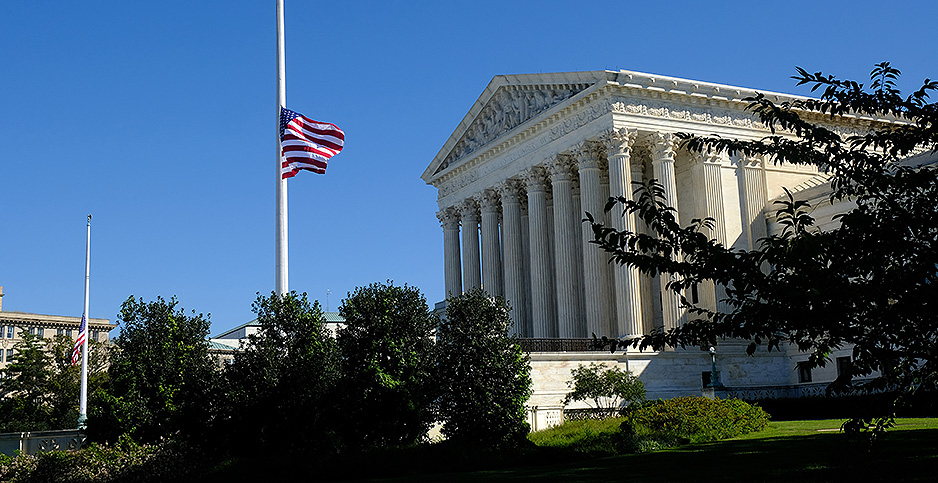 Members of the public paid tribute yesterday to the late Justice Ruth Bader Ginsburg outside the Supreme Court, where the flags were flown at half-staff in her honor. Trump's nominee to fill her seat could tilt the court's ideological balance sharply rightward. Leigh Green/SplashNews/Newscom

And if Trump loses in November, it could complicate Biden administration efforts to address climate change and make it tougher to roll back Trump’s deregulatory agenda.

Court watchers expect Trump’s nominee to replace Justice Ruth Bader Ginsburg, who died Friday at age 87, to fall ideologically to Roberts’ right. That could alter how the court handles administrative law, which governs federal agency actions and can be a key component of regulatory cases.

"Roberts’ vote would no longer be needed in close cases, and his strong adherence to precedent and concern about institutional integrity would be lost," said Vermont Law School professor Pat Parenteau in an email.

For energy and environmental cases, decisions based in administrative law can translate into how federal agencies can interpret their own authority under federal statute to set pollution controls. The shift in a court could make it more likely that Trump’s deregulatory actions — which have been sweeping across several agencies — would be upheld.

Trump is likely to name a replacement for Ginsburg as soon as this week. He and Senate Majority Leader Mitch McConnell (R-Ky.) have pledged to push the confirmation as fast as possible, in the event Republicans lose the White House or their majority in the Senate.

Democratic presidential nominee Joe Biden, in a speech yesterday in Philadelphia, appealed to Senate Republicans to wait until after the November election "as a service to the country at a crossroads."

"There’s so much at stake," he said, linking the high court vacancy to protecting rights including clean air, clean water and the environment.

Biden noted that the country is already facing four crises, including the coronavirus pandemic and "a changing climate that is ravaging our nation as we speak."

Roberts’ recent track record shows him carefully balancing the interests of the liberal and conservative wings of the court.

The chief justice notably sided with the more liberal justices in a pair of administrative law cases last term, ruling against the Trump administration’s efforts to include a citizenship question in the 2020 census and to roll back the Obama-era Deferred Action for Childhood Arrivals (DACA) immigration policy.

In the census case, Roberts incensed conservatives by writing that the administration needed to adequately justify its decision to add a citizenship question.

Roberts wrote that while it is permissible for agency decisions to be affected by politics, their justification cannot rest on a false premise.

Justice Clarence Thomas wrote at the time that with the census decision, Roberts had "opened a Pandora’s box of pretext-based challenges" on the reasoning behind every future agency decision (Greenwire, June 27, 2019).

In the DACA case, Roberts found that the Trump administration’s decision to roll back deportation protections for people who came to the United States illegally as children was "arbitrary and capricious" under the Administrative Procedure Act.

Thomas wrote in response that the ruling would effectively bind federal agencies to comply with unlawful policies ushered in by previous administrations (Greenwire, June 18).

"[Roberts] alone among the conservative justices voted to reject the agencies’ reasoning as inadequate in those cases," said Lisa Heinzerling, a law professor at Georgetown University Law Center.

"The requirement of giving reasons is a bedrock principle of administrative law, and it’s not clear what will happen to this requirement if Roberts no longer casts the swing vote," she wrote in an email.

"Justices Thomas and [Neil] Gorsuch seem as skeptical of preemption as Justice Ginsburg often was," Adler wrote in an email.

Preemption has been a feature of state common law nuisance cases on climate. States’ authority to block infrastructure projects that have been approved by the Federal Energy Regulatory Commission is part of the petition before the high court over the PennEast natural gas pipeline project (Energywire, June 4).

A sixth conservative justice could make it less likely that a Biden administration would be able to secure sweeping climate action, said Dan Farber, a law professor at University of California, Berkeley, School of Law.

"I think bold regulatory actions are going to be hard," Farber said. "What you really want to do is avoid any issues of law; do things that have already been upheld by the courts, only push harder, would be my advice."

With a new Trump-appointed member of the court, Justice Brett Kavanaugh could end up being the swing vote on the administrative law cases, Farber said.

"Looking at who’s next — who might join with liberals and Roberts to make five — the numbers are pretty close between Gorsuch and Kavanaugh on non-constitutional issues," Farber said. "[Kavanaugh’s] more conventional in his views on administrative agencies."

For example, Gorsuch has shown strong opinions about needing to check the power of administrative agencies, which hasn’t been evident with Kavanaugh, Farber added.

"Unless Trump surprises us with a nominee that’s more moderate than Kavanaugh, Kavanaugh is going to be the one you have to get," he said.

A major risk of having conservative 6-3 supermajority would be for the court to begin applying a "skewed and imbalanced" approach that has a "stingy" interpretation of federal statutes, while also applying lax standards to weak deregulatory actions, said William Buzbee, a law professor at Georgetown Law.

"If a new justice adopted this same anti-regulatory playbook, the Court would skew in a decidedly anti-regulatory direction but allow more agency rollbacks lacking sound reasoning to stand," he said in an email.

One of the rollbacks potentially affected by a change in the court is environmental groups’ efforts to undo the Affordable Clean Energy rule — the Trump administration’s replacement for the Obama-era Clean Power Plan — which takes a much narrower view of EPA’s authority to regulate greenhouse gas emissions under the Clean Air Act.

The case will be heard before the U.S. Court of Appeals for the District of Columbia Circuit on Oct. 8 and could be appealed to the high court.

"Justice Ginsburg was instrumental in the Court’s decisions finding that the Clean Air Act obligates EPA to regulate such emissions, and Justice Ginsburg or another justice in her mold would be likely to be very skeptical of EPA’s current attempts to narrow the statute’s reach for future administrations, and to eviscerate the role Congress carved out for states like California to set higher emissions standards," Dennis said in an email.

The White House Council on Environmental Quality’s new implementing regulations for a foundational environmental law may also find their way to the Supreme Court. The rules are being challenged in part for allegedly diverging too far from the bedrock National Environmental Policy Act.

Conservatives have long challenged how much courts should defer to agency interpretations of NEPA.

While Roberts has shown an interest in limiting the scope of that deference — known as Chevron deference — a more conservative justice may want to do away with it entirely, said Jody Freeman, director of the Environmental and Energy Law Program at Harvard Law School.

She noted that there has been a "certain instability" in recent major administrative law cases where a single vote could have tilted the outcome.

"In many of these big cases, [Roberts] is like a surgeon, wielding the scalpel carefully to achieve his desired outcome, but also doing so carefully to limit collateral damage. He is not looking for upheaval," said Freeman in an email. "A new conservative justice may not be as cautious or as concerned about ripple effects."

For example, the high court earlier this year also took aim at independent agencies when it struck down the structure of the Consumer Financial Protection Bureau. With an additional conservative vote, the court might have been persuaded to go further and find that all independent agencies are unconstitutional, said Freeman.

That could affect independent agencies like FERC or the Nuclear Regulatory Commission.

A sixth conservative justice could have the potential to "materially change" the outcome of at least one energy-related matter pending before the court, ClearView Energy Partners LLC wrote in a note to clients.

Clearview pointed to a July 9 Supreme Court ruling that found millions of acres in the eastern half of Oklahoma remain part of a Native American reservation for criminal law purposes — a decision that could have implications for oil and gas development in the state.

ClearView noted that the 5-4 decision by Gorsuch and the court’s four liberal justices found that Congress never dissolved the Muscogee (Creek) Nation’s tribal reservation and said the ruling "could lead to subsequent cases that address taxation and the Oklahoma mineral estate."

The case, McGirt v. Oklahoma, had drawn the attention of at least one oil and gas association, which warned of the potential consequences to energy development (Greenwire, July 9).

But ClearView analysts noted that the outcome might not change, concluding that although conservative justices tend to take strict interpretations of existing law, "recent experience has shown that Republican appointees do not always uphold the regulatory (or deregulatory) agendas of Republican presidents."