How agency staff pushed back on a ‘joke’ union contract 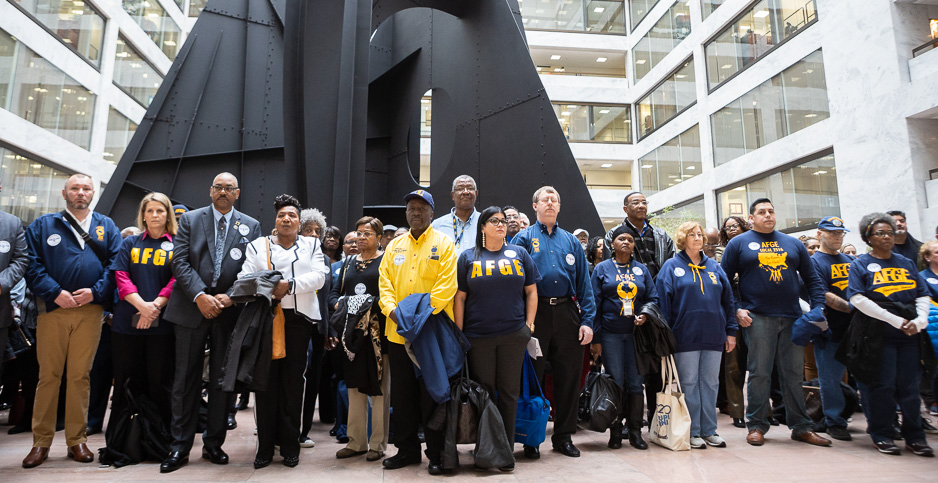 As EPA prepared last summer to impose a new contract on the majority of its employees, top officials faced fierce resistance within the agency.

Days before the contract was to be enforced, one EPA employee called for it to be pulled back.

"To begin discussing, the actual content of the document would almost be a joke," said the staffer, whose name was redacted, in an email.

"These dictates are not a step forward or even adjustments to any current or tentative agreements in play, they are major reversals of employees abilities to effectively work with EPA leadership, be fairly appraised of their performance, or maintain a modern work-life balance."

That wasn’t the only EPA employee to call for the imposed contract to be rescinded. Records obtained by E&E News under the Freedom of Information Act shed light on the battle between EPA and American Federation of Government Employees Council 238, the agency’s largest union, which represents more than 7,500 EPA employees.

After years of stop-start negotiations broke down last year, EPA on July 8 imposed a contract over union protests on those AFGE bargaining unit employees. It restricted telework, curbed the grievance process and forced union officials out of agency office space.

The move roiled EPA’s workforce, triggering protests organized by the agency’s AFGE locals and outside pressure from Capitol Hill to reconsider. The agency and the union since returned to the bargaining table last month to draft a new agreement. Those talks may wrap up this spring.

EPA employees were harsh and unsparing in objections to the imposed contract, emails show.

One called it unfair and "another blow to employee morale." Another said it was "draconian" and meant "to instill fear."

Another employee in an email to Deb Thomas, deputy regional administrator in EPA’s Region 8 office, took apart the edict point by point.

"I did not continue looking at the contract. My purpose is just to show you how negative it is for our relations," said the employee.

The imposed contract’s limits on remote work attracted notice. One EPA employee who used telework to care for an ill and disabled wife said they would consider leaving the agency.

"With the restriction in the AFGE bargaining agreement, I can no longer telework two days a week, and this will likely lead to my retirement from the EPA in the next several months," the person said in an email.

Another employee asked that their answers to the Federal Employee Viewpoint Survey, the annual government workers’ poll on morale, saying EPA was a good place to work and its managers are supportive be expunged.

"Neither of those are true if this moves forward," the person said in an email. "Please do the right thing. Do NOT issue this."

Donna Vizian, principal deputy assistant administrator for EPA’s Office of Mission Support received multiple emails taking issue with the AFGE contract. Vizian is the top career official in that office, which handles the agency’s human capital, among other tasks.

Her own staff spoke out against the imposed contract. EPA employees in OMS’ Office of Environmental Information put together a letter saying it would "degrade" the agency’s reputation and ability to do its mission.

"Donna, we deserve better and we implore you to stand up for EPA employees," they pleaded.

Employees in EPA’s Office of International and Tribal Affairs also drafted a similar letter in opposition to the contract.

EPA union officials said the messages from staff about the imposed contract last summer capture employees’ bewilderment at the time.

"I think there was a lot of anger. People were confused and looking for answers," said Bethany Dreyfus, president of AFGE Local 1236, which represents EPA Region 9 employees.

"Everything was anti-employee, so employees were not happy. It was set up for employees to leave," said Morton, who retired from EPA last November but remains president of the council.

While EPA officials received these complaints, there didn’t seem to be much response from them in return.

EPA spokeswoman Molly Block said that under federal labor law, the union is "the exclusive representative" of those bargaining unit employees, and agencies like EPA are barred from negotiating directly with those staffers.

"It would have been inappropriate for EPA to bypass the union and engage in discussions directly with the staff," Block said.

EPA and AFGE are now back in contract talks, which were relaunched in January, to draft a new agreement.

The schedule for those negotiations has been to generally hold talks for two weeks, take a break and then return to bargaining for another two weeks, union officials told E&E.

The negotiations have been held in EPA offices, like agency headquarters in Washington and its Research Triangle Park facility in North Carolina. EPA employees rallying in support of AFGE often greet contract negotiators before the day’s bargaining begins.

AFGE has also drummed up a public campaign to support EPA employees as the contract talks go on.

The union has drafted an EPA workers’ "Bill of Rights," which calls for protections for staffing and whistleblowers as well as climate change research and environmental enforcement. Its members have been lobbying lawmakers to sign the document.

About 6,500 concerned citizens have signed on in support of the rights bill so far, including nearly 1,000 EPA employees and 43 members of Congress, AFGE spokesman Tim Kauffman told E&E News.

The negotiations may be coming to an end soon.

EPA and AFGE are committed to conclude the contract talks by April 15 and work with the Federal Service Impasses Panel if necessary, Administrator Andrew Wheeler told staff in an internal email when he announced bargaining would begin again.

Kauffman with AFGE said the parties continue to bargain under the established ground rules but noted the timeline for the talks may stretch.

"If the parties do not reach final agreement on any articles or sections, then the parties will request the services of a federal mediator from [the Federal Mediation and Conciliation Service]," Kauffman said.

"Absent agreement during that process, unresolved issues may be referred to the Federal Service Impasses Panel (FSIP). The parties do not control the process or timeframe used by FSIP so we cannot speak to the timeframe for resolving issues raised during bargaining."

Block with EPA said the agency is committed to negotiating in good faith. She said EPA believes the negotiations will result in a resolution with AFGE.

"We are pleased AFGE agreed to enter into a settlement agreement which requires contract negotiations on a number of important subjects such as work schedules, telework and union rights. These negotiations are scheduled to conclude by April 15th," said the EPA spokeswoman.

"EPA and AFGE are now moving forward, and the Agency believes that negotiations will result in important agreements and a final resolution of the AFGE collective bargaining agreement."

Nicole Cantello, president of AFGE Local 704, which represents EPA Region 5 employees, said the agency should give up ground to the union as it drafts a new agreement.

"Their action in imposing this contract has created such a hostile work environment and they are losing staff," Cantello said.

"They better bring forward significant concessions or otherwise they are deliberately creating a serious public health emergency in this country."