How Alito tipped his climate hand in anti-abortion draft 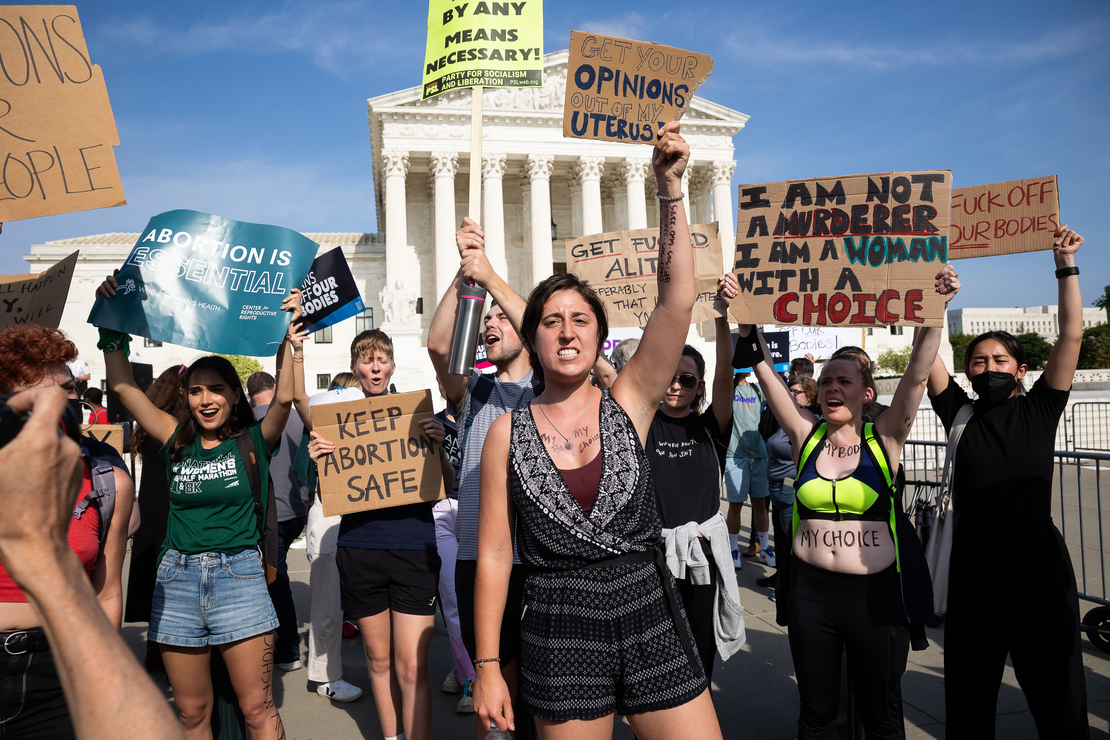 People protesting outside the Supreme Court on Tuesday in response to the leaked decision indicating that the justices could repeal abortion rights. Francis Chung/E&E News

The inclusion of one word in the draft Supreme Court abortion ruling is raising concerns among environmental lawyers that the justices are preparing to get more aggressive about rejecting climate lawsuits that come before the nation’s highest bench.

The February draft opinion in Dobbs v. Jackson Women’s Health Organization, authored by Justice Samuel Alito and reported by POLITICO this week, argues that the landmark 1973 decision in Roe v. Wade that ensured a right to an abortion was “egregiously wrong from the start.”

Alito also contends that abortion cases have “diluted” and “flouted” other areas of the law and have “ignored the court’s third-party standing doctrine,” under which courts can reject lawsuits if they find the challenger has not demonstrated a harm that meets the standard of a “case” or “controversy” under Article III of the Constitution.

“He’s casting doubt on third-party standing,” said Josh Gellers, a professor at the University of North Florida who studies environmental politics. “One of the more popular avenues for pursuing climate change litigation has been through a third party. If what Alito is signaling is a willingness to be stricter with how the court interprets third-party standing, then organizations may have a more difficult time trying to represent the interests of individuals.”

Gellers said a more narrow interpretation of standing would be “like death by a thousand cuts. It’s much more difficult to try and litigate climate change on an individual basis than it would be to have large groups. It could put the onus on people as individuals, as opposed to organizations representing their interests.”

Some legal experts have expressed fears that the Supreme Court’s conservative wing could seize on the opportunity to rehash climate standing doctrine established in the 2007 case Massachusetts v. EPA if the justices were to eventually review the kids’ climate case, Juliana v. United States. The Juliana lawsuit argues that the government’s support for fossil fuels worsens climate change.

But Julia Olson — executive director and chief legal counsel of Our Children’s Trust, which represents the young challengers — said she’s confident the case would clear the court’s third-party standing analysis because it focuses on harms to individuals.

“Third-party standing comes up when someone is litigating on behalf of someone else, but a lot of organizations rely on the harms of their members to bring the cases forward,” she said. “There’s no question in the Supreme Court’s precedent that if you have been injured by your government, you can come to court and bring a constitutional case.”

The fear among environmentalists, however, is that the justices will use the doctrine selectively, applying it to keep some plaintiffs out of court while allowing other cases to proceed (Greenwire, July 19, 2021).

Indeed, Alito, who was quizzed by Democrats at his confirmation hearing for taking a narrow approach to standing when he was a federal appeals court judge, last year embraced a more expansive view of standing than his colleagues in a case involving Texas’ and other states’ ability to challenge the Patient Protection and Affordable Care Act.

“The ACA saddles [the states] with expensive and burdensome obligations, and those obligations are enforced by the federal government. That is sufficient to establish standing,” Alito wrote in a dissent, disagreeing with the majority decision to uphold the health care law.

Jonathan Brightbill, who served as principal deputy assistant attorney general of the Justice Department’s environment division under former President Donald Trump, said he didn’t see anything in Alito’s language in the Dobbs draft ruling to suggest significance for environmental or climate cases.

“The point I read that Justice Alito is making is that Roe v. Wade, rather than sitting comfortably within the Supreme Court’s broader precedents … has been the source of many discordant precedents,” he said. “I read him to be saying that the barriers [for standing] should have been the same all along. And yet, exceptions were being made for Roe v. Wade.”

Brightbill continued: “Everyone is seeing in this what they want to see, either in service of trying to advance themselves or undercut the decision in advance and raise the temperature even more.”

John Echeverria, a professor at Vermont Law School, noted that Alito’s reference to the standing doctrine cites, among other cases, the 2020 decision June Medical Services v. Russo, in which the court struck down a Louisiana law that would have limited access to abortions. In that case, which split the court 4-1-4, Chief Justice John Roberts agreed with the plurality that the abortion providers had third-party standing.

In the draft Dobbs opinion, Alito cited his dissent in which he argued that the abortion providers should not have standing. Three other justices joined his opinion, at least in part.

The court has undergone a dramatic ideological shift since June Medical. Later in 2020, Justice Amy Coney Barrett, a conservative, replaced the late Justice Ruth Bader Ginsburg, a liberal reproductive rights champion, resulting in a 6-3 conservative majority on the bench.

“Significantly, while three justices joined in Alito’s dissenting opinion in June Medical, [Justice Brett] Kavanaugh did not join in the part of the opinion that addressed third-party standing,” Echeverria said in an email, adding that “one might surmise that the addition of Barrett to the court could supply the conservatives with four solid votes in support of Alito’s narrow view of third-party standing.”

And Echeverria said it may be one of the reasons that Roberts has emphasized that the Dobbs opinion is only a draft. A final ruling is expected this summer.

“Kavanaugh might object to the discussion of the third-party standing in the ghost opinion insofar as it suggests that the Alito dissent in June Medical now represents the viewpoint of the majority of the court on third-party standing,” Echeverria said.

Democrats questioned Alito about his views on standing in environmental cases during his 2006 Supreme Court confirmation hearings.

Sen. Dianne Feinstein of California cited Alito’s position on standing when she voted against him for the high court seat, saying she was troubled that he had adopted a narrow reading of standing in a case in which environmentalists unsuccessfully fought to sue a chemical company over water pollution.

“In doing so, his conclusion would have gutted the provision that allows individual citizens to enforce the law,” Feinstein said in a statement at the time.

She and Sen. Patrick Leahy of Vermont, then the ranking Democrat on the Judiciary Committee, both questioned Alito’s view of standing at his confirmation hearing, asking him whether he agreed with a 2000 Supreme Court decision that found an environmental group could sue over Clean Water Act violations, even after the pollution had stopped.

Feinstein noted that the high court’s ruling in Friends of the Earth v. Laidlaw Environmental Services had rejected Alito’s previous decision on standing in a 1996 case.

“It’s a precedent of the court, and I have respect for it,” Alito told Feinstein at the time. He added that the finding was “governed by stare decisis” — the concept that the judiciary is bound by precedent.

Alito noted that Laidlaw came after the 3rd U.S. Circuit Court of Appeals decision in Public Interest Research Group v. Magnesium Elektron, in which he joined a 2-1 majority that found the environmental group’s lawsuit against a manufacturer was improper because it couldn’t prove it or a river and its tributaries were injured by pollution.

“I haven’t gone back and thought about the question of whether Laidlaw creates doubt about the soundness of the decision in Magnesium Elektron,” Alito told Feinstein at the time. He added that if the issue came again, he “would follow Supreme Court precedent if I concluded that it was in conflict with the decision of the prior court of appeals decision.”

Alito went on to say that the Supreme Court has said its jurisdiction is limited to cases and controversies, and “that means you have to have a plaintiff who has suffered injury in fact.”

He added that all three judges on the Magnesium Elektron panel agreed that the plaintiffs “had not even alleged personal injury. “

Feinstein returned to the question of standing at Justice Elena Kagan’s 2010 confirmation hearing, asking the then-solicitor general whether she believed people can demonstrate standing to sue for environmental damages, including climate change.

“The answer is yes, depending on — much depending on what Congress does,” Kagan responded, pointing to economic injuries and health impacts like asthma from high levels of ozone.

She continued, “It can also be a kind of injury that you get when the environment is degraded and you can’t use the parks in the way you would have wanted to use the parks.”