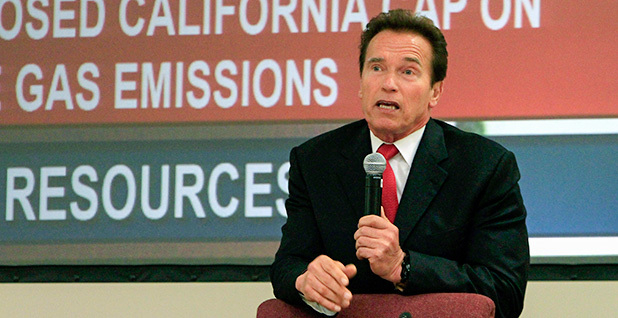 In 2010, after the Democratic-led U.S. Senate failed to pass a federal emissions trading system, the measure was widely diagnosed as politically dead. New England states picked up some of the pieces and soldiered on, but in the West, the outlook, compounded by the recession and newly elected Republican governors who insisted the measure was a hidden tax, looked dismal.

California, which fancied itself the centerpiece of what was to become the Western Climate Initiative (WCI), seemed to be in the most trouble. It had done much of the planning for this regional coalition, learning from the European Union’s mistakes and taking more time to design a system of measurements and rules to put an effective cap on its biggest sources of emissions. The plan of the state’s Air Resources Board started with electricity generators and large-scale manufacturing in 2013 and then spread by 2015 to cover 85 percent of the state’s greenhouse gas emitters.

On paper, California would become the world’s first economywide cap-and-trade system, a feat that impressed some of the pioneers of U.S. emissions trading.

One of them, Robert Stavins, a Harvard University economist, noted that it had rules that protected against scary market price gyrations and issuing too many allowances to emit greenhouse gases, which had crippled the launch of the European Union’s system.

"Those systems that are newer do tend to be better, and that’s good. If they were worse, that would be very bad news," said Stavins.

At the start, though, the stage for what was to become a new period of political and economic innovations looked like a war zone after the battle.

Political forces in the West were aligned against it. First, the six states that had planned to link with California’s system in WCI — Oregon, Washington, Arizona, Utah, New Mexico and Montana — had all dropped out or fallen off in their planning.

On top of that came a statement by California’s bipartisan Legislative Analyst’s Office that predicted "near term" damage to California’s economy if other states and some Canadian provinces didn’t join with it in WCI.

Polls showed that the average Californian knew almost nothing about cap and trade, which uses a market to help companies reduce their emissions. The European Union’s trading system was supposed to reward companies that find relatively cheap, innovative ways to reduce their emissions below a government-assigned cap by allowing them to sell unneeded carbon dioxide emissions allowances. The theory turned the state’s role into more of a market manager and less of an arbitrary regulator, but it was hard to explain on a bumper sticker.

Moreover, it didn’t always work in Europe. Dallas Burtraw, an economist and senior fellow for Resources for the Future, a Washington, D.C.-based environmental research group, attended a university forum in England in 2007 and watched the university’s red-faced plant manager greet a group of economists in the audience by swearing at them. He had convinced the university to buy more efficient boilers to heat its buildings, assuring the school that it could help pay for them by selling unneeded emission allowances when their price went up. Instead, their value dropped to zero.

Screaming at the economists at the forum, he said: "You made me look like a fool!" Burtraw began working out plans for a price floor if the European program were adopted in the United States.

The state’s environmental groups were split over California’s use of cap and trade in 2008. Carl Pope, then chairman of the Sierra Club, recalled the case he made against it: It favored local polluters by giving some of them free allowances. A simpler approach would be to just slap a tax on all carbon emissions. Environmental justice groups, also powerful in California, insisted that more of the state’s income from trading had to be steered toward poorer communities.

California’s Chamber of Commerce painted emissions trading as a "job killer," and most oil companies mounted a ballot initiative in November 2010 to delay the climate law from taking effect.

But then a funny thing happened. Republican governors hoping to run for president in 2012 were backing away from climate change, but California’s governor, Arnold Schwarzenegger, who had signed California’s plan into law in 2006, threw his political muscle into implementing it, joining with his Democratic successor, Gov. Jerry Brown, in building a powerful coalition that included environmental groups, the state’s growing clean energy industry and most electric utilities.

Pope, who retired from the chairmanship of the Sierra Club in 2011, said that Schwarzenegger’s staunch defense of the state’s climate approach "meant a lot" to its survival.

Brown oversaw some key compromises that helped bring California’s program to life. Having watched the European Union’s struggle with crashing emissions prices, state officials set a starting price floor of $10 per ton of CO2, with annual increases to keep pace with inflation. The floor price is currently just under $13 per ton.

The auctions have generally been fetching slightly above the floor, and all sales have sold out, except the most recent auction in February.

To ease the burden on industry, California also gave a significant percentage of allowances — about half, in 2016 — to emitters for free, based on their potential to use part of the incentive to defend their market against out-of-state competitors in the energy sector. Utilities and natural gas suppliers also receive their allowances gratis, on the condition that they put them up for auction, then distribute the proceeds to customers. That resulted in a bill credit averaging about $60 last year.

Since then, California has held 14 auctions of emissions credits, producing a total of just over $4 billion in state revenue and providing the most tangible outcome yet. The so-called Greenhouse Gas Reduction Fund has already handed out $1.6 billion to projects around the state that promise to reduce emissions, including electric buses, rail upgrades, housing near transit stations and Brown’s planned high-speed rail line.

Last year, the state began holding joint auctions with Quebec. Ontario issued draft regulations in February that envision an initial solo auction in March 2017 and joining up with California and Quebec soon thereafter. Manitoba announced in December that it would link to Quebec and Ontario, a move that would implicitly link the province to California.

"After introducing its cap-and-trade program and putting a price on carbon, California’s economy grew at a pace that exceeded the growth of the rest of the U.S. economy," Ontario Environment and Climate Change Minister Glen Murray pointed out. Jobs grew by 3.3 percent in the first 18 months of the program, outstripping the national growth rate of 2.5 percent.

Envisioning a ‘global hybrid’ of markets and taxes

While the full extent of the program’s effect on the California economy remains impossible to measure, it certainly helped fend off charges that it would be a job killer or harm low-income neighborhoods. The program coincided with an economic uptick even after emissions trading expanded last year to cover transportation fuels. The state’s unemployment rate has sunk to 5.5 percent, down from 9.4 percent when the program launched in January 2013.

Some environmentalists say the linked and continuing success of California and Quebec will inspire other provinces and states to follow suit.

"Some oil interests had warned for years that regulating fossil fuels would be disastrous for the economy, but California saw healthy job growth that was more than double the rate in oil-friendly Texas," noted Erica Morehouse, an attorney with the Environmental Defense Fund, the main environmental group pushing emissions trading.

Meanwhile, Gov. Brown is continuing to expand California’s climate diplomacy, most recently signing 123 subnational governments to a pledge to limit emissions to between 80 and 95 percent below 1990 levels by 2050, ahead of the U.N. talks in Paris in December last year.

After California took its initial plunge into emissions trading, starting with the planning stage in 2006, the nine RGGI states, extending from New England to Maryland, created a simpler program restricted to power plants in 2009. It was the first to include a price floor, like a reserve price at an auction, that helped prevent allowance prices from going too low and damaging investors and companies who relied on their value. Another version of this plan was adopted later in California.

Since 2014, RGGI claims to have been on course to reduce its emissions by 45 percent and to have created $1.3 billion in net economic benefits. There have been few hiccups in RGGI’s operations (which has kept it mostly out of the news).

Meanwhile, another newcomer to emissions trading, Canada’s province of British Columbia, has been building a kind of hybrid system, which includes a carbon tax covering over 70 percent of the province’s emissions and a cap-and-trade program on provincial and local governments. So far, the carbon tax has cut the use of petroleum fuel in the province, while in other provinces it has risen. Meanwhile, British Columbia’s gross domestic product grew by 9.2 percent.

The province’s governments have reduced their emissions by the equivalent of taking 767,000 cars off the road in a year. Thirty of them, governing about a third of the province’s population, have used energy efficiency programs to stop their annual increase in emissions.

Pope, who spent part of his career at the Sierra Club as a sharp-tongued critic of emissions trading, now admits he’s somewhat baffled by its recent successes, particularly in the northeastern United States and in British Columbia. He said studies show that the programs have performed "much better than economic theory predicted they would." He’s puzzled by that, but thinks emissions trading seems to work in "non-rational ways. Carbon prices should not be high enough to have as many impacts as have occurred, but they are."

Where does Pope think all this is headed? "I think we’ll end up with some kind of global hybrid, with taxing systems linked with trading systems. It might happen much faster than most people think," he said.

Does that mean he’s still skeptical about emissions trading? "I’m still a skeptic," insisted Pope, "but somewhat less skeptical than I was."