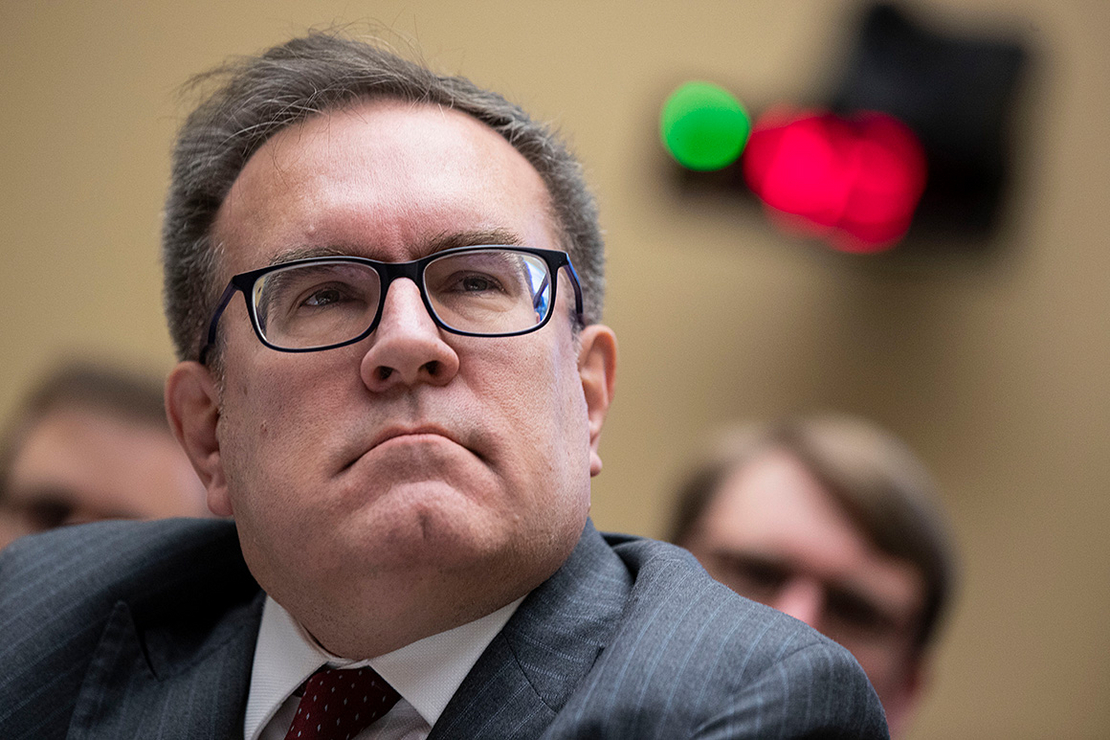 The Trump-era EPA administrator’s quest for a Cabinet post under Virginia Gov. Glenn Youngkin (R) has come to an end.

The state’s lawmakers closed their legislative session this weekend without reviving Andrew Wheeler’s nomination for secretary of natural and historic resources.

According to the state constitution, Wheeler was allowed to remain secretary until the end of the legislative session. He told E&E News he had planned for that scenario.

“I was told by a state senator before I was nominated that the state Senate Democrats planned to hold one cabinet nominee to try and rebuff the governor. Knowing this, I still decided to accept the position of secretary because I knew I could get a lot done in this short amount of time on behalf of Gov. Youngkin and the people of Virginia,” Wheeler said in a statement.

Wheeler is not leaving the governor’s side.

“I have been asked to stay with the Youngkin team indefinitely to further implement his agenda,” Wheeler said. “I was assured by several Democratic state senators that this was nothing against me personally or my professional qualifications but that it was just ‘raw politics’ which the governor also said when the state senators first began their antics in January.”

Wheeler is now a senior adviser to Youngkin, working on natural resources issues, Wheeler said and an aide to the governor confirmed. The new position is not subject to the Legislature’s confirmation.

Democratic state Sen. Joseph Morrissey, who represents a district that stretches from Richmond to Petersburg, said he tried to get Wheeler confirmed under a broad agreement to approve Youngkin’s nominees along with those named by former Gov. Ralph Northam (D) before the latter left office. He couldn’t get his colleagues on board.

“And that’s unfortunate, because I think he actually would work overtime to show how committed he is to environmental issues,” Morrissey told E&E News of Wheeler.

Wheeler had made a public commitment to help find funding for Richmond to separate its combined sewer overflow system, a high priority for Morrissey.

“I personally believe, with Andrew, if he had been given the opportunity, he would have demonstrated his commitment to environmental protection,” Morrissey said. “I believe he would have worked diligently to clean our iconic Appomattox River and James River and Potomac River.”

The key vote came Feb. 8, when the Senate voted 21-19, along party lines, to adopt a list of Youngkin nominees to confirm that did not include Wheeler (E&E News PM, Feb. 8).

If Morrissey voted with Republicans, it would have created a tie, allowing Lt. Gov. Winsome Sears (R) to break it and save Wheeler. But he didn’t, because he did not want to escalate a larger fight over nominees that embroiled picks for the State Corporation Commission and the Parole Board.

“While I’m only one senator, did I try to forge a compromise, a resolution? I did, working publicly and behind the scenes. It wasn’t successful. I did the best that I could,” Morrissey said.

Lawmakers plan to return to Richmond in the coming days to finish work on the state’s budget. But the Legislature adjourned sine die Saturday, ending their normal session and Wheeler’s tenure.

Inside the campaign against Wheeler

Hours after Youngkin announced he picked Wheeler — a former energy lobbyist whose clients included a coal company — as the state’s top environmental official, environmental groups in and out of Virginia mobilized to defeat him.

Organizations including the Virginia League of Conservation Voters, the Sierra Club’s Virginia Chapter, Appalachian Voices, the Southern Environmental Law Center and the Chesapeake Climate Action Network teamed up for an effort that included emailing more than 15,000 Virginians, sending thousands of text messages, making hundreds of phone calls and Facebook advertisements that reached more than a million people.

They sought to highlight what they saw as the destructive Trump EPA policies during Wheeler’s tenure, including rolling back numerous climate and air pollution policies and proposals to slash funding for the Chesapeake Bay cleanup program, which enjoys broad bipartisan support in the Old Dominion.

“At the outset, we had to think very hard about whether it was even going to be achievable,” said Lee Francis, deputy director of the Virginia League of Conservation Voters.

“This campaign sort of took on its own momentum and its own life,” Francis said. “And I think at the end of the day, the work we did paid off.”

The Facebook ads featured Wheeler with Trump or Youngkin, or sometimes billowing smokestacks. One ad, from Appalachian Voices, prompted viewers to lobby Morrissey against Wheeler after the senator spoke positively of the nominee.

“My day to day was fighting this nomination for a good four weeks,” Francis said, noting that greens were simultaneously fighting Republican efforts to roll back major environmental policies in the Old Dominion. “We see defeating this nomination as a huge, historic win.”

The effort to block Wheeler from the Virginia post also drew upon resources that were once used against him at EPA.

A research book on Wheeler was compiled on behalf of environmental organizations when he was nominated for EPA, David Di Martino, a consultant that works with green groups, told E&E News.

It was later updated during Wheeler’s tenure at the agency to help organize against his agenda there.

“The book made its way to organizations in Virginia working to oppose his nomination,” Di Martino said.

In addition, the anti-Wheeler campaign was fueled by current and former EPA employees.

But days before, another letter opposing Wheeler, signed by more than 150 former EPA employees, attracted even more attention.

Penny Fenner-Crisp — who served 22 years at EPA, including as a senior scientist and manager in its pesticide programs office — was one of the main organizers behind the letter.

“Since I was keenly aware of his tenure at the agency while administrator, I was appalled to think that would be repeated in my home territory,” Fenner-Crisp, an Albemarle County, Va., resident, told E&E News. “So I decided to do something about it.”

The letter’s signers came quickly onboard.

“We sent the letter out for signatures on a Tuesday afternoon. By Thursday at 6 o’clock, we had 158,” Fenner-Crisp said.

Since Wheeler left the agency in January 2021, he took on some familiar trappings of a former EPA administrator.

He signed on with think tanks, including the Heritage Foundation and the America First Policy Institute, a Trump-aligned group. He made media appearances and gave speeches.

Wheeler also formed a consulting firm, Eagle Mill Consulting LLC, in February 2021, according to Virginia secretary of state records. He and Michael Molina, who served as EPA deputy chief of staff, are the firm’s principals, its website says.

Wheeler, however, told The Richmond Times-Dispatch he had received no income from the firm. He did not answer E&E News’ questions about his firm.

There were clues that Wheeler still relished the public policy arena.

He published op-eds and papers. He campaigned for Rep. Mike Carey (R-Ohio) in his special election bid last year. And he testified against a plastic bag tax before the Fairfax County, Va., board of supervisors (Greenwire, Sept. 16, 2021).

Then, Youngkin named Wheeler to his transition team. By January, Youngkin announced his nomination as natural resources secretary.

In testimony before Virginia state legislators that month, Wheeler said he didn’t apply for the job but was offered it by Youngkin.

“This position, if I’m confirmed, with the conservation portfolio and environmental protection aspects of this position, may very well top every job that I’ve ever had,” Wheeler told lawmakers. “With your support, I want to make a positive difference and I know that I can.”

Wheeler’s critics were shocked he was chosen for the Virginia job.

“It just puzzles me that someone who had a lead role in a federal agency would want to function in a lead role at the state level,” Fenner-Crisp said. “People go back to their home state to run for office, but this wasn’t an elected position.”

Wheeler’s supporters see it differently, arguing one can make a positive impact running a state agency. The Virginia job was a natural next step given Wheeler’s commitment to public service, according to Mandy Gunasekara, who was EPA chief of staff through most of 2020 to the end of the Trump administration.

“He’s always had an eye towards being involved in public policy and public service. So it seemed in line with the type of jobs that he’s had in the past,” Gunasekara said, noting that Wheeler’s first professional job was a career position in EPA’s toxics program. “Plus the fact that he worked directly on projects at EPA, including the Chesapeake Bay cleanup, that lent itself to him being extremely effective and good for this type of role.”

Doug Benevento — who had several roles at the Trump EPA, including as acting deputy administrator — said former EPA administrators typically head to the private sector.

“I think there is a traditional path: consulting, corporate, private equity, law firm,” Benevento told E&E News. “Wheeler had those options. He is kind of breaking the mold because he is bringing the expertise, 30 years, to the Youngkin administration.”

“It’s not an illogical move,” Whitman told E&E News. “Once you are out of that job, there is nothing really else like that at the federal level so it’s at the state level where you can be the top environmental officer.”

“That could have been a very lucrative choice for him. Instead, he chose the Virginia secretaryship,” Reilly said. “I admire that about him.”

Before the Virginia Senate adopted the resolution nixing Wheeler from Youngkin’s Cabinet nominees, senators focused on his service in the Trump administration.

“I get the politics. I understand that some of these environmental groups out there don’t like him because of who he worked for,” state Sen. Richard Stuart (R) said on the Senate floor, adding it was “a real shame,” considering Wheeler’s credentials.

Wheeler’s ties to Trump have not helped him, according to Reilly.

“Wheeler had the misfortune to work for someone who is despised in many quarters,” Reilly said. “He has a record at EPA that I have criticized and would not defend.”

“The problem I think that an Andrew Wheeler finds is the baggage,” Whitman said. “Just the association, particularly an environmental position, because the Trump administration wasn’t particularly interested in protecting it.”

Asked if she is on a “blacklist” of Trump officials along with Wheeler, Gunasekara replied, “Probably!”

“I’m sure we’re on lots of lists. Unfairly so, in my opinion,” said Gunasekara, now a consultant. “I find it really disappointing that broader politics have gotten in the way of Andrew being able to serve in a role of which he’s immensely qualified and would do really great things for public health and the environment.”

Gunasekara helped organize more than 120 of Wheeler’s former colleagues and supporters to write a letter backing his nomination, a response to the former EPA staff opposing him.

Benevento, now counsel at Faegre Drinker Biddle & Reath LLP, pointed to work the Trump EPA had done, including cleaning up Superfund sites, reaching out to the Navajo Nation and Gulf Coast restoration.

Fenner-Crisp isn’t happy Wheeler took another job with the governor. Youngkin has not announced a new nominee for the natural resources position, but she said Wheeler could influence that person.

She said, “I’m concerned on whether or not he would be serving as a shadow secretary.”