How Ariz. became a hot spot in the West’s solar battles 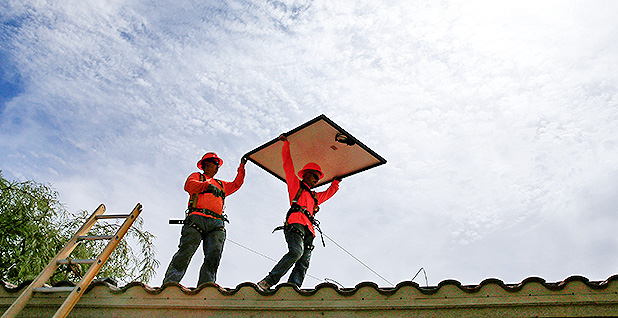 Electricians install solar panels on a roof for Arizona Public Service Co. in Goodyear, Ariz., last year. An election battle at the Arizona Corporation Commission has major implications for rooftop solar in the state. Photo courtesy of AP Images.

When Robert Burns first won a seat on the Arizona Corporation Commission in 2012, most voters he met on the campaign trail didn’t know the state had an elected board responsible for setting utility rates.

"It’s changed considerably since then," he noted wryly in a recent interview.

This year, Burns is one of five candidates running for three seats on the Arizona commission. The election has roiled this Southwestern state’s politics and captured the attention of utility watchers nationwide. The new commission will decide everything from net-metering rates to fixed charges on consumers’ bills, making Arizona the new Nevada in the sprawling national debate over residential solar.

"As the top solar market after California, Arizona has national prominence as it grapples with questions central to the future of distributed generation," said Hannah Polikov, who oversees the Public Utility Commission Program at the green business group Advanced Energy Economy.

Much of the local attention has been directed at "dark money" spent by Arizona’s largest utility in the 2014 election.

Arizona Public Service Co. (APS) has not denied accusations that its parent firm, Pinnacle West Capital Corp., funneled $3.2 million through an independent political group to two candidates perceived to be friendly to the utility’s interest. The FBI has subpoenaed APS officials and Corporation Commission members amid claims the utility has corrupted commission proceedings, The Arizona Republic reported.

APS has not made any donations in this year’s election to date, though CEO Don Brandt recently encouraged the utility’s employees to back the three Republicans in the race, according to Phoenix radio station KJZZ. SolarCity Corp., the residential panel installer, has donated $1.5 million to a political action committee supporting pro-solar candidates. The Arizona Association of Realtors is also reportedly prepared to spend $1 million to support the three Republicans running, the Republic reported.

Three Republicans and two Democrats are running for the commission, where the GOP now occupies all five seats. But the battle lines don’t necessarily follow traditional partisan lines.

‘They are trying to draw lines in the sand’

Burns, a Republican, has led the charge for APS to disclose its election spending. And in a desert state where water is often in short supply, he is fond of pointing out that coal generation uses a lot of water while solar does not. SolarCity is running ads on Burns’ behalf, even though the candidate has asked the panel installer to stay out of the campaign.

A second Republican commissioner, Andy Tobin, who was appointed earlier this year, is viewed by many as a swing vote on the commission. In a recent rate case, he supported a grandfathering provision for residential solar customers and opposed a demand charge sought by UniSource Energy Services, a Tuscon, Ariz.-based utility. Yet solar supporters note he voted against Burns’ proposal for the commission to investigate APS’s campaign donations. Tobin says he encouraged Burns to take the matter to court because that is where it would end up anyway.

Republican challenger Boyd Dunn has expressed skepticism about net metering, saying in a recent debate that while residential solar has brought jobs to Arizona, it may need to be modified because of its success.

The two Democrats, Tom Chabin and Bill Mundell, are running as a joint ticket. Both are highly critical of APS. Chabin, in particular, believes the utility needs to come to terms with the fact that residential solar has fundamentally changed its business model. He believes APS’s days are numbered.

"In order for us to prepare for that destiny, it’s going to happen, let’s figure out a way to transition," Chabin says.

Save Our AZ Solar, the PAC funded by the company, did not respond to requests for comment.

Much of the hoopla stems from APS’s pending rate case. In it, the utility has proposed cutting net-metering rates for most solar customers from 12.8 cents a kilowatt-hour to 2.9 cents a kWh. It would also impose a demand charge of $6.60 per kWh, a rate assessed against consumers’ maximum energy use during a particular billing period.

The utility has said such measures are needed to prevent cost-shifting, where non-solar users pay for a greater share of the grid. Solar advocates say the provisions are a barely concealed guise to keep residential ratepayers from putting panels on their homes.

APS officials did not respond to repeated requests for comment, but in July a utility executive framed the proposal as a technology agnostic mechanism for reducing peak demand (EnergyWire, July 27). Barbara Lockwood, APS vice president of regulation, said some 120,000 APS customers, or 11 percent of its customer base, have "thrived" by voluntarily adopting demand-based rates.

Others are more skeptical.

"In some ways, I feel like they are trying to draw lines in the sand to start the negotiating process," Rule says. "They’re asking for the stars and hoping to get as much as possible."