How Barrasso may run Energy and Natural Resources 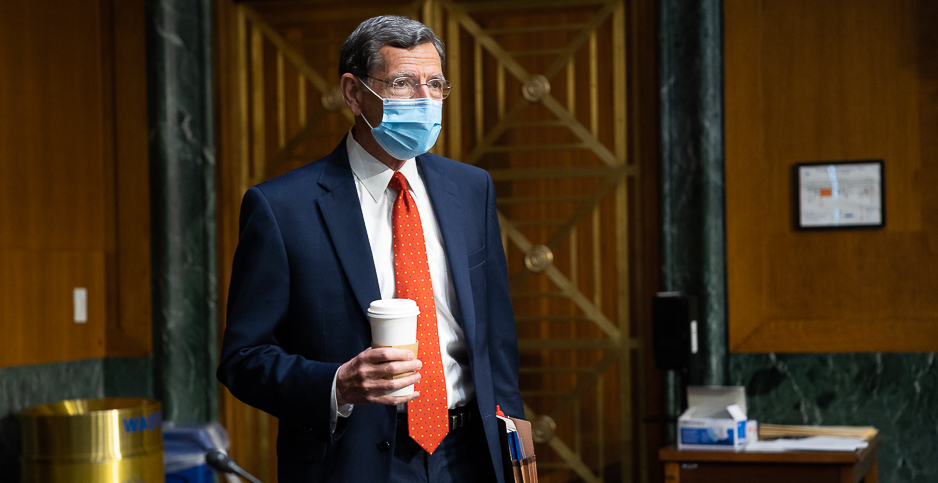 On the one hand, he has made a career as a conservative defender of the fossil fuel industry. During weekly appearances as the third-ranking Senate Republican, Barrasso often attacks Democrats for their climate plans and supposed embrace of the Green New Deal.

On the other, Barrasso has shown a willingness to engage Democrats as chairman of the Environment and Public Works Committee, where he has worked on some of the most significant climate-related bills to pass in recent years.

How Barrasso chooses to behave next year will determine the work and breadth of activity on the Energy and Natural Resources Committee, where he will be the top Republican. And if the GOP keeps control of the Senate, Barrasso will hold the gavel and control the agenda.

For activists hoping for comprehensive climate action from the committee, he is unlikely to change his approach, observers say.

A longtime opponent of carbon taxes and cap-and-trade measures, Barrasso has favored more limited approaches that use the federal government’s research and development capabilities to help reduce emissions. He’s currently pushing S. 383, dubbed the "USE It Act," which would encourage direct air capture of carbon dioxide.

"Innovation — not government regulations and taxes — is the best way to address climate change," Barrasso said last week in defense of his latest nuclear energy bill, S. 4897, the "American Nuclear Infrastructure Act," during a markup.

What ends up on Barrasso’s agenda will depend on a broad clean energy research and development package put forward by current ENR Chairwoman Lisa Murkowski (R-Alaska) and ranking member Joe Manchin (D-W.Va.).

Should Congress fail to attach the legislation to a must-pass spending and pandemic package in the works, Barrasso would inherit a ready-made innovation plan.

"He’s been very, very supportive of that agenda, so I can’t imagine he would do anything other than add to the ambition of that and sort of take another run at that," said Richard Powell, executive director of ClearPath, a conservative clean energy group.

Should the energy bill pass this month, that would give Barrasso "a lot of wiggle room to take on additional challenges," said Powell.

That could include continued focus on advanced nuclear technology, the logistics of carbon capture and storage, and an increased priority on direct air capture — a technology in its infancy, but which global leaders agree is critical to reach net-zero emissions.

Barrasso has been at the forefront of pushing carbon capture technology though the 45Q tax credit and his "USE IT Act" (E&E Daily, Sept. 11).

In the waning days of this year, he has found bipartisan cooperation for throwing a financial lifeline to struggling nuclear reactors in wholesale markets (Greenwire, Dec. 2).

And he has shown a willingness to engage in bipartisan climate negotiations. The agreement he brokered with EPW ranking member Tom Carper (D-Del.) on hydrofluorocarbons (HFCs) has the potential to prevent a half-degree Celsius of warming by midcentury (E&E Daily, Sept. 11).

"It’s really important that he is a really conservative member, a member of Senate leadership, and he’s from a leading fossil-powered state, and he’s very open about his stance on climate change, that it’s real and we have to do something about it and lead the way with innovation," Powell said.

Even with those policies in tow, Barrasso has shown himself to oppose climate-motivated ambitions that could interfere with the economy of his state.

Conservative groups expect Barrasso to keep that in mind at ENR when considering Energy and Interior department nominees from President-elect Joe Biden.

"Barrasso is going to need to be much more focused on protecting the interests of his state," said Tom Pyle, president of the American Energy Alliance. "I think folks are going to be concerned about the direction a Biden presidency would take toward the bread-and-butter economic engine that is Wyoming."

"If Republicans hold the majority in the Senate next year, we will have the ability to reject Mr. Biden’s nominees. Unlike the Democrats, we will use that power responsibly. A Republican Senate will treat mainstream nominees fairly," wrote Barrasso.

"Those who are out of the mainstream," the chairman added, "will face a gantlet, not a garden party."

Barrasso has been a leader against any extension to the electric vehicle tax credit, and throughout the surface transportation reauthorization process — where last year he backed the first-ever climate title — Barrasso has refused to address an increase to the gas tax or consider a carbon tax as potential pay-fors (E&E Daily, June 5).

He has been among the many Capitol Hill conservative opposed to extensions of the wind and solar tax credits.

Barrasso has also shown a willingness to back the grid resilience efforts of the Trump administration to aid coal and nuclear power plants, going so far as to join a letter last month calling on the Federal Energy Regulatory Commission to act on that docket as soon as possible.

Barrasso was also among six Republicans on the panel who last year voted against S. 2137, the comprehensive efficiency package Sens. Rob Portman (R-Ohio) and Jeanne Shaheen (D-N.H.) have been pressing for nearly a decade.

Barrasso, who was among the top congressional recipients of donations from homebuilders in 2018, supported an amendment by Sen. Mike Lee (R-Utah) to strip language opposed by the National Association of Home Builders during last year’s markup of the Portman-Shaheen bill (Greenwire, Sept. 25).

Debate over whether to include the controversial building code provisions and negotiations surrounding HFCs helped delay the Murkowski-Manchin energy package (E&E Daily, Sept. 14).

Energy will only be part of Barrasso’s portfolio next year. He’s sure to bring a Western conservative’s ethos to public lands issues under the committee’s jurisdiction.

"His state is more oriented to the direction of ENR than EPW, so I think he’ll be more focused on protecting the interests of his state," Pyle said. "I think that bodes well for all of the Western and federal land issues."

Western lawmakers have had a complicated relationship with the Land and Water Conservation Fund. While some see value in the fund as a booster of the outdoor recreation economy in their respective states, many — including Barrasso — see the fund as an abusive federal land grab and prefer to remove restrictions the government ostensibly put in place to protect precious wildlife and resources.

Earlier this year, Barrasso opposed the Great American Outdoors Act, landmark bipartisan conservation legislation that fully and permanently funded the LWCF and created a trust fund to address some of a $20 billion backlog of deferred maintenance projects.

This summer, he was enthusiastic about confirming fellow Wyoming native William Perry Pendley to lead the Bureau of Land Management, despite Perry’s controversial statements demeaning the Black Lives Matter movement and record of favoring the disposal of public lands.

"I’m from Wyoming; what do you think?" Barrasso replied when asked at the time whether he supported Pendley’s nomination, which was later withdrawn.

Barrasso has supported overhauling the National Environmental Policy Act to speed up infrastructure permitting by removing the need to secure certain environmental impact assessments, and he’s been in favor of delisting certain animals from protection under the Endangered Species Act.

"He is a public lands enemy," Randi Spivak, the Center for Biological Diversity’s public lands program director, told E&E News. "He might have taken a correct vote once or twice, but you can look no further than his record on public lands issues to see the danger signs."

Other environmental advocates are more charitable in their assessments of Barrasso’s legislative portfolio when it comes to public lands.

In October, President Trump signed into law the America’s Conservation Enhancement Act, which extended funding for existing conservation programs and authorized millions of dollars to create new ones. Barrasso co-wrote, co-sponsored and championed the legislation.

"One of the pieces of Sen. Barrasso’s record that doesn’t get enough praise is all the conservation bills he’s moved the last couple years," Collin O’Mara, the executive director of the National Wildlife Federation and a short-list candidate for Biden’s EPA administrator, recently told E&E News.

"Conservation, and hunting and fishing in particular, are so important to Wyoming that I think it’s why he’s been the lead sponsor of some of the most significant conservation bills move the last couple years," O’Mara added. "I think that’ll continue."

Spivak said that kind of talk sends the "wrong message."

"We need conservation leaders, and the fact that a senator will support a very narrow hunting bill does not make them a conservation leader by a long shot," she said, adding that the only bright spot in Barrasso’s likely ascension is that Biden would be in the White House to provide a check to the Wyoming lawmaker’s agenda.