How beating up Big Oil helped Dems hold the Senate 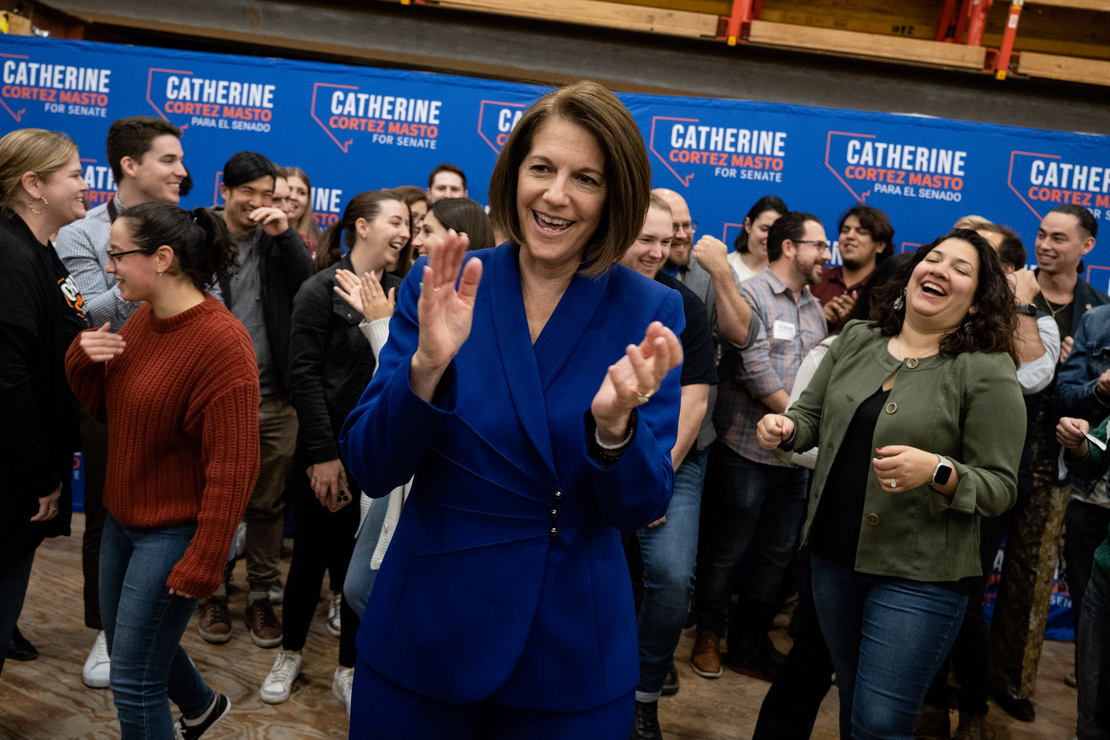 Republicans expected the high price of gas to hand them a midterm sweep. Instead, it might have helped Democrats win the race that delivered them the Senate.

Nevada’s Democratic Sen. Catherine Cortez Masto spent months blasting GOP nominee Adam Laxalt over his ties to Big Oil. On the campaign trail and in million-dollar ads, Democrats accused oil companies of profiteering from high fuel prices — and funneling those profits to the campaign of Laxalt, who as attorney general opposed investigations into the oil sector’s climate disinformation campaigns.

Cortez Masto, among the most vulnerable Democratic incumbents of the midterms, prevailed by about 9,000 votes, according to unofficial results, or less than 1 percentage point.

In such a close race, every factor matters. And like Democratic candidates across the U.S., Cortez Masto campaigned heavily on abortion rights — an issue that pollsters say was key in limiting Democratic losses and preventing the predicted “red wave.”

But Cortez Masto stands out from other Democrats in how aggressively she campaigned against Big Oil. Her victory has emboldened climate advocates to push that message harder in future elections.

“She clearly … saw it as an important and winning message, and, frankly, hammered on it,” said Pete Maysmith, senior vice president of campaigns at the League of Conservation Voters Victory Fund, the country’s largest environmental super political action committee.

“As an issue, it existed in other races, yes,” he said. “[But] not as prominently, not with as much sharpness, as it did in Nevada’s Senate race.”

Seventeen percent of Democratic TV ads in Nevada’s Senate race tied Laxalt to the oil industry, adding up to about $6.5 million, according to an E&E News analysis of AdImpact spending data.

Laxalt did not respond to a request for comment. During his campaign, he primarily blamed inflation on Democrats’ “spending spree.” He campaigned with former Energy Secretary Rick Perry and blamed Nevada’s gas prices — among the highest in the country — on President Joe Biden canceling the Keystone XL pipeline and halting oil and gas leasing on federal lands. He accused Cortez Masto of being a “rubber stamp” for those policies.

The attacks on Laxalt, meanwhile, focused on his attempts to shield Exxon Mobil Corp. from other states’ fraud investigations.

After Inside Climate News published documents in 2015 showing Exxon had misled the public for years about the harms of climate pollution, New York and Massachusetts launched probes into Exxon and its allied political groups, which the oil major sued to halt.

Laxalt tried to intervene on Exxon’s behalf. He joined a public letter with other Republican attorneys general saying the probe threatened “free speech.” Later, he joined an amicus court brief arguing the investigations were “fishing expeditions” in service of a “social ideology.” In that 2016 brief, he cast doubt on climate change, saying, “The debate is unsettled, the research far from complete.”

During the midterm campaign, Democrats also criticized Laxalt for working for Cooper & Kirk PLLC, a lobbying and law firm that represents oil and gas companies. His financial disclosure forms report $2.2 million in income from his work there, but not whom he represented.

Cortez Masto spent about $1 million on ads showing people at a gas station blaming the high prices on oil companies and, by extension, Laxalt.

“Adam Laxalt gets rich, the oil companies get rich and we get this,” the ad says. “If he’s working for them, I know he’s not working for us.”

The spot ends on a shot of Cortez Masto talking with a person filling their gas tank.

National and local supporters of Cortez Masto echoed that line of attack.

LCV Victory Fund ran its first Senate ad of the cycle in Nevada. The ads, worth $1.5 million, showed a small-business owner blasting Laxalt for supporting companies that profit off inflation: “Big Oil has enough senators. They don’t need more help from Adam Laxalt.”

In Nevada, the state AFL-CIO held events in which labor leaders painted Laxalt as protecting oil companies while they charged workers higher prices. And days before the election, a state lawmaker excoriated Laxalt’s oil ties in the Las Vegas Sun.

“The choice for voters on Election Day is simple. Either Nevada reelects Cortez Masto, a leader unafraid to stand up to Big Oil, or like Laxalt, who is beholden to the industry,” she wrote.

Biden has been blaming oil companies for high prices since 2021. On the campaign trail, other Democratic candidates also blamed the oil industry for inflation and other problems, such as Colorado Sen. Michael Bennet and New Hampshire Sen. Maggie Hassan.

But none did it with the same gusto — or resources — as Cortez Masto, who sits on the Senate Energy and Natural Resources Committee.

One reason for that was the circumstances of her race. Unlike other key midterm battlegrounds like Colorado or Pennsylvania, Nevada has no significant fossil fuel reserves. The Silver State produced less than 0.01 percent of U.S. crude in 2021, according to the U.S. Energy Information Administration, though it does have a major mining sector.

But the state is among the most vulnerable to climate change, especially drought and extreme weather (Climatewire, Nov. 2).

Climate advocates also found the issue to be a particular weakness for Laxalt, citing polling that guided their Big Oil strategy.

“We’re not going to do this just because we have a nifty idea,” said Maysmith of LCV Victory Fund, explaining that they had data showing this was an effective strategy.

Attacks against Big Oil are especially effective when candidates can talk about climate investments they’ve already helped pass, he added.

“We’re going to start to hear that frame more and more, as the benefits of the Inflation Reduction Act really start to flow over the course of the next couple of years,” he said.