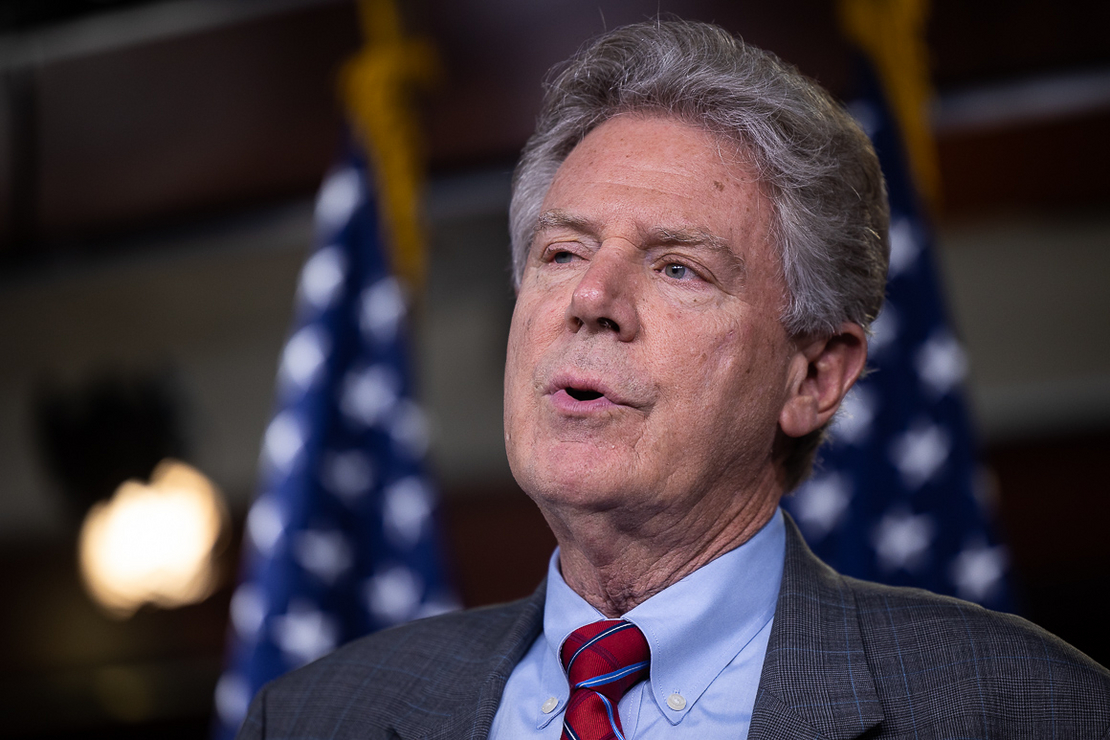 House Energy and Commerce Chair Frank Pallone (D-N.J.) has long been pushing for a revival of the Superfund tax. Francis Chung/E&E News

The Senate is poised to revive an industry tax to pay for toxic site cleanup, offering a twist in a long-running saga that up until now has fallen victim to partisan divisions.

The pay-for to fund EPA’s Superfund program is a key component of the bipartisan $1.2 trillion infrastructure deal, which is expected to pass the Senate. The tax has survived thus far, despite some dissent from industry advocates and prominent lawmakers.

The per-ton excise tax would target 42 chemicals, critical minerals and metallic elements, including substances like benzene and chlorine, with revenue directed into the fund created by the Comprehensive Environmental Response, Compensation and Liability Act. It’s expected to generate $14.4 billion over 10 years.

The inclusion of the tax is the result of a yearslong effort from lawmakers and advocates following the expiration of the tax more than two decades ago. Key for including the tax was desperation from Republican negotiators to find pay-fors. Lawmakers now argue that manufacturers will reap vast benefits from the legislation in exchange for a little pain.

"They’re going to do so well on this, because they’re making the products that are essential to everything we’re doing," Sen. Bill Cassidy (R-La.), one of the Senate negotiators, told E&E News.

The push for the tax was part of a larger effort by environmental justice backers in the Senate to get their priorities included in the package, according to Sen. Cory Booker (D-N.J.), a leading supporter of Superfund spending whose state has a large share of cleanup projects. Dozens of Superfund projects lacked funding to get started in 2020, according to advocates.

Both he and Sen. Tammy Duckworth (D-Ill.) are co-founders of the Senate Environmental Justice Caucus. She said the tax gained support once other lawmakers acknowledged a clear connection between the provision and assisting communities adversely affected by pollution.

"It’s just people understanding the nature of environmental justice — we worked on it for a long time," said Duckworth, when asked what has changed since the tax was allowed to lapse in 1995.

Sources who have followed the talks said lawmakers long invested in reviving the Superfund tax — including Energy and Commerce Chair Frank Pallone (D-N.J.) — fought behind the scenes for the provision. As it gained momentum, environmental justice advocates stepped up in support, while Republicans have found it an increasingly appealing pay-for in a high-dollar proposal.

Booker said the excise tax has garnered bipartisan support historically, noting that former President Reagan backed reauthorizing it and that, in the past, Senate Minority Leader Mitch McConnell (R-Ky.) has favored it, too.

Both Booker and other environmental justice advocates had pushed for a more aggressive reinstatement of the tax that would have applied it to fossil fuels, as well, and indexed it to inflation. But those proposals were dropped in final negotiations, averting a fight with the fossil fuel industry and likely making the excise tax more acceptable to Republicans in the bipartisan group.

And while groups like the American Chemistry Council have been vocal in their opposition to the tax’s inclusion in the bill, industry members have more quietly signaled that the issue is one they are willing to concede in exchange for the legislation’s other provisions.

Sen. Kevin Cramer (R-N.D.), an EPW member, said "there was not a lot of noise" from any possible opponents to the tax, and called it partly a "change in culture" as the issue of paying for cleanups has evolved in recent years.

The chemical industry has argued that the bill would place a $1.21 billion annual tax on producers, with the burden passed on to consumers. Proponents maintain that the tax’s inclusion in the bill is a necessary measure and that critics are overstating its impact.

Duckworth said the tax now has "very bipartisan" backing, something Republicans appeared to echo this week. Cramer said lawmakers were desperate to find pay-fors, and the provision helped raise revenue. The senator, who is open to the tax, said agriculture interests had initially raised some concern over whether it would affect fertilizers.

But, Cramer added, there are already carve-outs in the legislation that exempt some of the ingredients in those products.

Since the tax’s expiration, the Superfund program has relied largely on general Treasury revenues, something environmental groups say is unsustainable. But the tax has never been revived by Congress, largely due to partisan rifts and pressure from industry (E&E Daily, Feb. 18, 2011).

Some lawmakers have remained persistent on the issue, however, including Pallone and Rep. Earl Blumenauer (D-Ore.) — the latter most recently unveiled H.R. 2674 in April, in response to calls from President Biden to bring back the tax (E&E Daily, April 21). Pallone meanwhile revived the "Superfund Polluter Pays Restoration Act," H.R. 2703, also in April, with Booker introducing the Senate version, S. 2183.

Advocates stressed Pallone’s role in elevating the provision. His home state of New Jersey is the nation’s leader in Superfund sites, and his district alone has several in various stages of remediation.

Those proponents say Pallone saw an opening to push the issue as negotiations wound down and lawmakers struggled to pay for the $550 billion in new spending in the infrastructure bill. By waiting until so late to propose the fee as a pay-for, there was little time for industry opponents to block it, and senators were eager to clinch a deal that would not add to the debt.

"Palllone had his bill for years, and I think he’s been looking for any opportunity, as any good member of Congress does, to slip it in wherever he could," said Katie Murtha, vice president of government relations at U.S. Public Interest Research Group and Environment America. "It’s a huge win."

Pallone had an important Senate ally in Booker, as well as Environment and Public Works Chair Tom Carper (D-Del.), who also sits on the Senate Finance Committee and is well-versed in tax policy.

Murtha, who worked for years to restore the Superfund tax as a chief of staff for former Rep. John Dingell (D-Mich.), said the late push caught some groups off guard, and she scrambled to rally supporters. She said environmental advocates have long wanted the tax revived, but that its long-running dormancy had kept it out of focus for many.

Danielle Melgar, an anti-toxics advocate also with U.S. PIRG, said that while her group has been working on the issue, the sudden movement was somewhat unexpected after years of inaction.

"To see this all happen, in a bipartisan plan, is a little surprising, just given the history of how the tax went away," Melgar said.

But she also said the trajectory made sense. In a report earlier this year, U.S. PIRG’s Education Fund found that a lack of federal funding has helped drive a backlog in Superfund site cleanup. The group called for the Superfund tax’s revival as a means of addressing the problem (Greenwire, Feb. 10). Momentum has been building in the time since, with the infrastructure deal offering an opening.

"It’s one of the few pay-fors in an expense-heavy package. It makes a lot of sense politically and strategically," said Melgar.

‘For the greater good’

Among the loudest opponents of the tax is the American Chemistry Council. The powerful trade organization has run multiple ads imploring Congress to reject the tax, in addition to penning op-eds.

ACC President and CEO Chris Jahn emphasized "grave concerns" about the infrastructure legislation in a July 7 letter addressed to the Senate. In response to the Senate bill released earlier this month, Jahn commended multiple elements of the legislation but reiterated qualms with the tax.

"We will continue to engage with Congress and the administration to find ways to forestall this harmful action," he said.

ACC declined to comment further on its outreach efforts to Congress. But the group isn’t without allies in its fight. Last Thursday, Sen. Ted Cruz (R-Texas) slammed the tax on the Senate floor and introduced an amendment to strike the provision. The Republican argued that the tax would harm U.S. manufacturing and the economy.

"The old saying was, ‘If it moves, tax it, and if it stops moving, subsidize it,’" Cruz said. "Well, this bill taxes the things that we’re trying to get moving in the first place."

Cruz’s amendment ultimately failed to garner a vote along with others after Sen. Bill Hagerty (R-Tenn.) raised an objection about deficit spending (E&E Daily, Aug. 6).

Some industry members have themselves acknowledged that the battle against the tax might be a losing one — given the bill’s bipartisan support and backing from a range of corporate interests.

"It’s one of those things [affected stakeholders] are sort of ready to let go, for the greater good of the bill," one industry source said.

Cassidy, the Louisiana senator, said that the deal had been "thoroughly vetted" with a range of stakeholders, who have largely bought in. "They’re going to sell a lot of product, okay," he said. "And they know it."

Proponents of the tax said they weren’t ready to celebrate yet, but felt somewhat secure in its prognosis.

"You can’t really overstate how huge it is, if this passes through a bipartisan package," said Melgar. "We’ve just come so far from when these taxes first went away. It’s a really strong indicator for what can happen on other policies."