How Biden and Trump differ on climate finance regulations 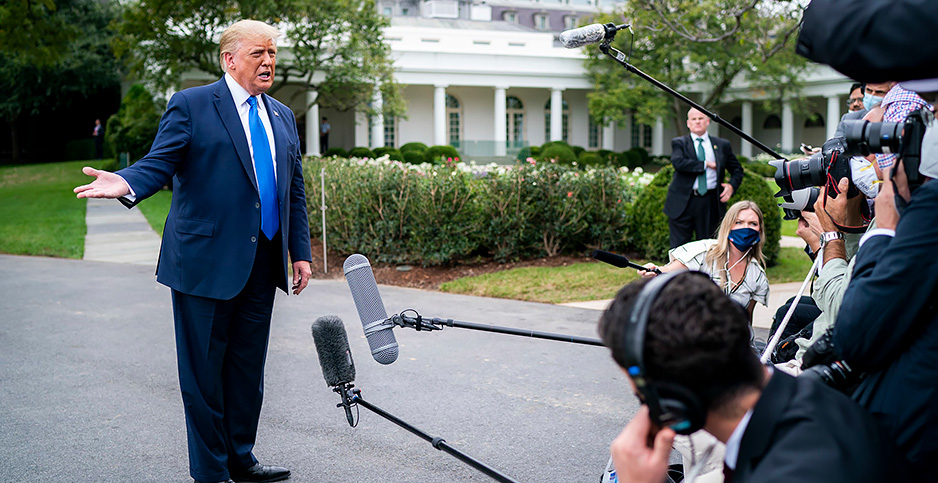 The outcome of the presidential election is expected to have a major impact on how the U.S. financial sector handles climate change, experts say — starting with the degree to which companies must report their vulnerability to global warming.

A victory by former Vice President Joe Biden, they argue, opens the door to new regulations that would force public companies to provide detailed information about the climate-related threats they face.

A second term for President Trump, meanwhile, has the potential to further stymie Wall Street’s efforts to identify the ways the financial sector is exposed to — and responsible for — climate change.

Recent actions by the Trump administration have pushed the U.S. in the opposite direction it should be moving, critics argue. The backsliding threatens the country’s long-term financial stability.

"It’s not just that the U.S. is on autopilot and not doing anything. It’s that the authorities are actively pushing back on efforts to make progress on climate, in particular through the financial system. That’s the thing that concerns me the most," said Graham Steele, who directs the Corporations and Society Initiative at the Stanford Graduate School of Business.

In April 2019, Trump issued an executive order that promoted investment in domestic energy infrastructure. It also directed the Department of Labor to assess the energy investment trends of retirement funds.

According to Heather Slavkin Corzo, who heads U.S. policy at the Principles for Responsible Investment, that was when it became "absolutely clear" the administration was intent on funneling capital to oil and gas companies. In just the last several months, she added, "the energy around these issues from the administration has picked up quite a bit."

The Labor Department in June, for instance, proposed a rule that would make it more onerous for private retirement plan managers to account for social and environmental risks while investing on their clients’ behalf.

Among other changes, the rule would require plan sponsors to prove in detail that any sustainable funds they offer would not cost workers competitive returns in comparison to more conventional retirement options (Energywire, June 29).

In a nod to skepticism about the financial wherewithal of so-called sustainable funds, Labor Secretary Eugene Scalia said in a statement that the proposal aims to clarify that "retirement plans are not vehicles for furthering social goals or policy objectives that are not in the financial interest of the plan."

The vast majority of plan sponsors and financial firms, however, opposed the amendments. They argued in public comments that acknowledging climate change is a risk management strategy — and that it can boost investor profits, rather than sacrifice them (Climatewire, Aug. 21).

The Securities and Exchange Commission, meanwhile, has in recent months focused its attention on overhauling the proxy system — a tool used by investors and activists to push public companies in a greener direction.

The SEC in July finalized new restrictions on proxy advisory firms that provide investors with independent recommendations on how to vote their shares during companies’ annual meetings.

And just last week, the independent agency raised the bar that determines which investors are allowed to propose shareholder resolutions at the companies in which they invest (Climatewire, Sept. 24).

Proponents of the rules said the changes would ensure shareholders have reliable information and a sufficient economic stake in a company before being allowed to propose or vote on major changes. Critics said the moves are a boon to corporate executives — and that they stymie demands by activist investors for information about companies’ exposure to social and environmental risks.

"Even as Europe is requiring more disclosure on these issues, requiring that institutional investors take these issues into account when investing, and developing standards for disclosure, the United States has done literally the opposite," said corporate and securities litigator Ann Lipton, a professor at Tulane Law.

"To the extent it can," Lipton added, the United States is "trying to impede institutional investors from using these criteria … and it’s hindered the only mechanism shareholders have been using to force disclosure."

It’s difficult to predict the impact a second Trump term could have on the regulation of climate risk in the United States.

The Commodity Futures Trading Commission, an independent markets regulator, on Sept. 10 released a landmark report that charted the financial threats of climate change — and laid out more than 50 recommendations for how the U.S. should address them.

Despite this alarm bell from a U.S. regulator, and similar warnings from regulators abroad, Lipton said, Trump’s first term has revealed prevailing resistance to the idea that investors have a legitimate interest in sustainability.

Asked about the implications of that skepticism moving forward, Lipton said, "I can’t say they’ve used all the tools at their disposal yet."

"The SEC has all kinds of powers at its disposal to regulate mutual funds’ fiduciary obligations in a way that would make it increasingly hard to engage on these issues. … I don’t know if they do want to use them, because that’s extremely heavy-handed, but I mean it’s certainly out there," she added.

Even without additional rules, the U.S. still could face major problems as a result of inaction.

Other countries have begun developing robust sustainability reporting systems. And because institutional investors and companies do business across borders, they would eventually become subject to disclosure requirements in other regions.

That could cause the U.S. to lose its grip on regulatory control in this space, experts say, and would likely hamper the competitiveness of U.S.-based firms.

Ultimately, the continuation of the Trump administration’s policies and approach could mean there "would be no federal or comprehensive attempt to prepare for the risks that climate-fueled destruction will be blasting over vast swaths of our country," said Sarah Bloom Raskin, an Obama-era Treasury Department deputy secretary.

"The way forward then," Raskin wrote in an email, "would have to rely purely on rigorously disciplined CEOs figuring out that the long term survival of their firms depends on their taking action by themselves, without guideposts or a level playing field."

Not a slam dunk

To be sure, a potential Biden administration wouldn’t necessarily be a slam dunk for sustainable finance.

"So regardless of who the president is," Steele said, "there is going to need to be an education process for the people who are traditional financial regulatory types to get them to understand the terminology, to understand the risk frameworks, to get them comfortable with the idea that this isn’t a narrow social issue."

Election aside, Allison Herren Lee, one of two Democratic SEC commissioners, said in an email that the SEC’s first step should be to develop standardized disclosure requirements that focus on climate risks and impacts.

Biden is on board with the idea.

According to his environmental platform, if he wins the White House, he would issue an executive order on his first day in office that would require public companies to disclose climate risks and their carbon footprints.

Steele said this would be a natural and feasible first move, in light of intensifying calls from investors for uniform information about the threats climate change poses to their assets. He added that he could see the Federal Reserve joining the Network for Greening the Financial System, an international group of banks and regulators that want to reconcile the finance world with the climate goals of the Paris Agreement.

Equally important in Lipton’s eyes is that a potential U.S. disclosure system be reconciled with Europe’s approach. Financial institutions also must be required to account for social and environmental issues — rather than be prevented from doing so.

Lee, who has opposed the commission’s recent rulemakings, agreed.

"Unfortunately, we have a very short window of opportunity if we are going to facilitate an orderly transition toward a carbon-neutral economy," she said. "This requires a coordinated global effort. Delay hampers the ability for U.S. investors to accurately price risk and drive capital, and it also means we risk falling behind international efforts and putting U.S. companies at a competitive disadvantage globally."