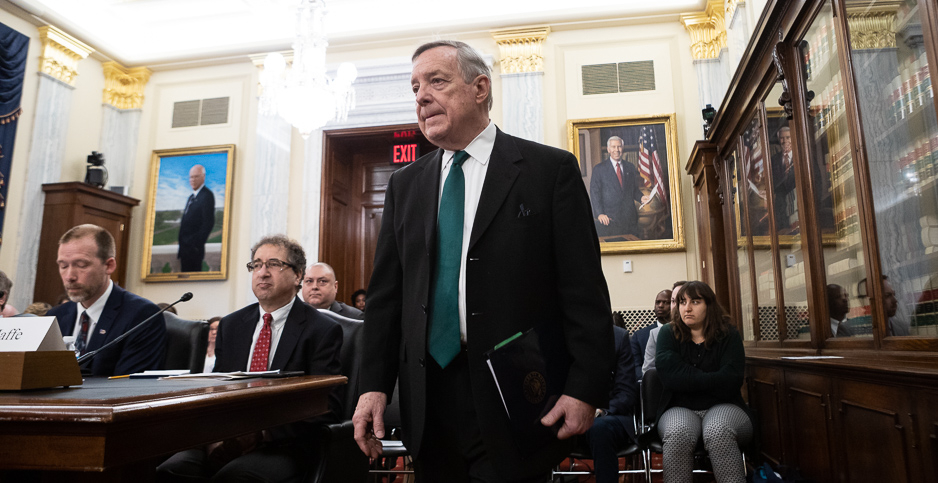 President-elect Joe Biden has signaled he’s ready to begin appointing federal judges soon after he steps into the White House next week.

And now that Democrats have won a pair of runoff elections in Georgia, Biden will have the assistance of a Senate narrowly controlled by his own party.

"This will make it easier," said Carl Tobias, a law professor at the University of Richmond. "It won’t be easy of course because it may be that a lot of votes are close."

The president-elect will have fewer opportunities to reshape the federal courts — as President Trump did over the last four years by appointing more than 230 judges, including three Supreme Court justices.

There are currently 45 vacancies in the U.S. courts and no immediate opportunities to appoint a new member to the nation’s highest bench.

"There currently just aren’t that many [judgeships] to fill," said Ilya Shapiro, a senior fellow in constitutional studies at the libertarian Cato Institute.

When Trump took office, there were more than 100 vacancies in the federal court system, including one open Supreme Court seat, after Senate Republicans threw up roadblocks to former President Obama’s judicial picks.

Under Trump, GOP leaders in the Senate have moved to fast-track judicial appointees, sometimes despite objections over young nominees’ basic qualifications to hold lifetime positions on a federal court.

Some liberal advocacy groups are calling on Supreme Court Justice Stephen Breyer to step down from the bench to make space for Biden to appoint a younger replacement. At age 82, Breyer is now the court’s oldest member.

The calls follow similar efforts during the Obama administration to get Justice Ruth Bader Ginsburg to step down from her post.

Ginsburg died last fall at age 87 just as voting had begun in the 2020 general election. Trump, aided by Senate Republicans, moved swiftly to install Justice Amy Coney Barrett as Ginsburg’s replacement, cementing a 6-3 conservative majority on the court potentially for decades to come.

"Justice Breyer’s service on the court has been remarkable, and history will remember him even more fondly if he ends up playing a critical role in ensuring the appointment of the first Black woman to the court," Brian Fallon, executive director of Demand Justice, said in a recent statement.

If he has the opportunity to select a Supreme Court justice, Biden has said he would choose a Black woman.

"Timing his retirement in the coming year would guarantee that opportunity," Fallon said of Breyer, "and it would be wise to do so because the window may prove a narrow one."

Not all liberal groups have joined the call, with many noting that judges and justices uphold themselves as nonpartisan, independent thinkers.

"Justice Breyer’s going to make his own decision about his future," said Ben Driscoll, judiciary program director for the League of Conservation Voters, which is not joining the push for Breyer’s retirement.

In the lower courts, Biden will have an immediate opportunity to fill as many as three circuit court seats, including one on the powerful U.S. Court of Appeals for the District of Columbia Circuit.

Biden has selected D.C. Circuit Judge Merrick Garland to serve as his attorney general, potentially opening up a spot on a bench that often has the last say on environmental rules from EPA and other agencies.

The president-elect is reportedly expected to appoint Judge Ketanji Brown Jackson of the U.S. District Court for the District of Columbia to replace Garland. Jackson, who is Black, could add diversity to the federal circuit, Driscoll said.

"We’re really looking forward to seeing some people who bring some additional experience and background," he said.

Diversity is particularly important on the D.C. Circuit, which hears a lot of disputes over federal rules that carry high stakes for minority and low-income communities located near industrial activity, Driscoll added.

"It’s important we have judges who have understanding of those real impacts," he said.

Jackson has also been floated as a potential Supreme Court pick for Biden: Her name was in the mix for the high court seat that Obama eventually tapped Garland to fill.

Senate Republicans blocked Garland’s confirmation to replace the late Justice Antonin Scalia, claiming that Obama shouldn’t be allowed to select a Supreme Court nominee once the 2016 primary election had begun.

Those claims came back to haunt GOP leaders during the confirmation process for Barrett, which took place much later in an election year.

Once Biden is in office, some federal judges could choose to take senior status, opening up an opportunity for the incoming administration to select their replacements.

But the pool of judges eligible for semiretirement is limited and consists of jurists appointed by both Democrats and Republicans, Shapiro noted.

"That would not be enough to shift the majority on any circuit that’s currently majority Republican appointees," he said.

Now that Jon Ossoff and Raphael Warnock have won Senate seats in Georgia, Democrats will have a slim lead over Republicans in the upper chamber.

Both parties have 50 members, and Vice President-elect Kamala Harris would step in to serve as a tie-breaking vote when necessary.

Harris’ vote will be important for any potential "marginal candidates" Biden appoints to the courts who might not have garnered support from moderate Republicans like Lisa Murkowski of Alaska or Susan Collins of Maine, Shapiro said.

Democrats will lead the Senate Judiciary Committee, and any tied committee votes on judicial nominees would still move ahead to the Senate floor.

It’s unclear whether the committee will return to a practice that was used during the Obama administration that allowed home-state senators to block circuit court nominees by failing to return blue slips to the Judiciary Committee.

Then-Judiciary Chairman Chuck Grassley (R-Iowa) said at the start of the Trump administration that he would move forward with appointees regardless of blue slips.

"Democrats will have to decide one by one," said Tobias, the University of Richmond law professor. "It may be that they have to leave these broken norms in place until they rebalance the appellate courts."

Demand Justice urged the committee’s incoming Democratic leadership not to reinstate blue slips. Illinois Sen. Dick Durbin (D), who has expressed interest in serving as the panel’s chairman, has shown a "commitment to not playing by one set of rules under a Democratic president and another under a Republican president," Christopher Kang, chief counsel for Demand Justice, said in a statement.

"As part of that commitment," Kang continued, "we look forward to him bypassing the archaic blue slip process to make sure Senate Republicans don’t get to veto President-elect Biden’s judicial nominees."

It’s also unclear what Biden could do with his promise to convene a bipartisan commission to study options for reshaping the federal courts.

The president-elect has ducked questions on whether he would add seats to the Supreme Court, a practice known as "court packing."

Demand Justice and other groups this week called on the Biden team to use the bipartisan commission to take a serious look at Supreme Court reform.

"With great hope and optimism, we look forward to your administration working to restore our democracy and tackle big challenges including racial inequality, climate change, economic justice, and access to affordable healthcare," the groups wrote in a letter obtained by Politico. "We also know, as you do, that the current Supreme Court is a threat to progress on any of those issues and many more."

Biden could potentially add judges to the federal district courts, an idea that has received bipartisan support in the Senate (E&E Daily, July 1, 2020).

"There’s a huge backlog for these federal courts," said Driscoll of LCV. "That has real consequences for people trying to get their cases heard."

Biden has declined to publicly offer his list of potential judicial nominees, but the president-elect has called on Senate Democrats to identify public defenders and civil rights lawyers in their states who they think would bring diversity to the federal bench, according to a letter obtained by HuffPost.

Driscoll said he’s optimistic that the Biden administration will look beyond white and male lawyers and jurists to fill out any court vacancies that do occur over the next four years.

Increasing the diversity of the federal courts could be one of Biden’s most lasting legacies in reshaping the judiciary, Driscoll said.

"A lot of people don’t see justice when they look at the justice system," he said.

Correction: An earlier version of this story misattributed a quote by Ilya Shapiro.