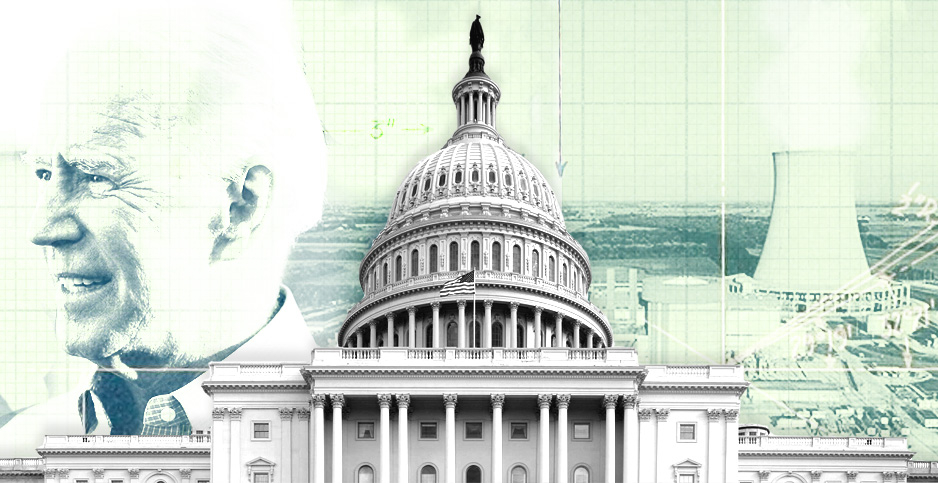 The word "renaissance" is still barely a whisper within the leadership of the U.S. nuclear industry.

But more than a dozen years after expectations for nuclear power sparked and then flamed out, industry hopes are rising with President Biden’s endorsement of subsidies for old reactors and new designs as vital contributors to unprecedented federal clean energy goals.

"We’re not just talking the talk," she added, citing the $1.8 billion requested in Biden’s fiscal 2022 budget for nuclear energy, up 50% from last year’s enacted levels.

"That starts with preserving our existing fleet" — the 93 reactors at 55 plants that now provide 20% of U.S. electricity and more than half of the carbon-free power, she said. "We have to find more ways to keep them up and running."

The answer the Biden administration has backed is a new federal incentive — a production tax credit patterned after the tax benefits that accelerated wind power’s growth in the United States over the past two decades. Several versions of a PTC that would include nuclear are pending in Congress.

Biden’s energy plan also promises increased backing for a crop of smaller reactors, some with radically different technologies, whose designs complement a surge in wind and solar installations.

The administration’s support has made an impression on Clay Sell, chief executive of X-energy, a Rockville, Md.-based company that won an $80 million Department of Energy grant to help it get a pilot version of its high temperature reactor running by 2027.

Sell told the NEI conference that he and other industry executives had just met with Biden administration leaders. "They couldn’t have been stronger in declaring the absolute, essential requirement that we get a massive build-out of nuclear power in order to achieve their decarbonization goals," he said.

"This is the most exciting time in the history of our industry, period," added Sell, a 20-year veteran of the nuclear business. Other executives at the conference echoed Sell’s optimism about the opportunities ahead.

To strengthen their political case for subsidies, nuclear industry leaders are promoting the location of new reactors on the sites of coal power plants that are being forced to shut down because of their greenhouse gas emissions.

NEI President Maria Korsnick, in her conference remarks, said that new reactor projects on the graves of closed coal plants should qualify for special incentives.

"In many cases, next-generation nuclear reactors could literally be built on fossil fuel sites. Much of the infrastructure connecting these plants to the grid is already there," she said.

In some cases, the steam systems used by coal power plants could be adapted for reactors, cutting perhaps a quarter of construction costs, according to Korsnick, who added that Wyoming, Montana, North Dakota, Utah and West Virginia are interested in attracting nuclear replacements.

Even Christopher Hanson, chairman of the Nuclear Regulatory Commission, echoed a measure of optimism at the conference. "We have a regulatory role and not a promotional role, as everybody knows," Hanson told the NEI audience Tuesday. He added, "I look at there being a really bright future for the industry as a whole and for the NRC and the role that we get to play."

But some environmental groups and industry critics have questioned whether nuclear power — with its radioactive waste and potential safety hazards — should qualify as "clean" energy in Biden’s agenda. And others at this week’s conference also pointed to history’s hard lessons for the industry.

Southern Co.’s Plant Vogtle in Georgia — the only nuclear plant under construction in the United States — is years behind schedule and billions over budget. The Summer nuclear project in South Carolina failed unfinished in 2017, and two top executives of one of the project partners, Scana Corp., have pleaded guilty to fraud charges of concealing spiraling costs from regulators and customers. A third executive at another V.C. Summer contractor pleaded guilty yesterday to making false statements to law enforcement officials.

Southern recently said that challenges with a key test at Vogtle’s first reactor mean it likely will not start up until the first quarter of 2022, missing a November deadline. But a team of consultants said that project developers have underestimated the amount of time it will take to complete all the work and inspections needed and that it’s more likely that Vogtle’s first unit won’t start up until next summer.

In sharply worded testimony filed with state utility regulators this week, members of the Georgia Public Service Commission staff and Vogtle’s independent monitor said a "vast amount of work" needs to be completed before loading fuel into the reactor, among other issues.

What’s more, it may take another $2 billion to finish both of Vogtle’s reactors, which already are roughly twice their original $14 billion budget, one consultant said.

In a statement to E&E News, Southern’s Georgia Power unit said it is still planning for a January 2022 completion date for the first reactor, but "risks remain on the project and it is possible that the cost estimate could increase in the future."

"The company’s inability to accurately forecast the start of major milestones has been well documented over the history of the project," they said.

"How do we know it’s going to be different this time?" asked Stoddard, whose company bought Scana. "We have to prove we can execute. We have a great window of opportunity. We need to seize that opportunity."

History’s second warning is the resistance among progressive lawmakers to nuclear power. Sen. Bernie Sanders (I-Vt.), for example, celebrated the 2013 closure of the Vermont Yankee nuclear power plant and has called for moving to "safer and more economical sources of sustainable and renewable energy" like wind and solar.

John Kotek, vice president of policy development at NEI, noted at the conference that there is bipartisan support in the Senate for a "technology neutral" tax credit for clean energy sources that would include nuclear plants, but the opposition is tougher in the House.

"There’s some hope we’re at least making headway in the Senate," Kotek said. But House members controlling tax legislation "just haven’t wanted to include nuclear alongside other carbon-free generation. So we have a fight on our hands there."

The debate on whether — and how much — to support nuclear plants to address climate change began a half-dozen years ago and expanded to a handful of states whose governors were seeking deep cuts in their power plants’ greenhouse gas emissions. In states where nuclear, fossil and renewable generators compete daily to supply the cheapest energy, nuclear reactor operators found themselves losing out to natural gas and wind generation. Now, many states are pouring money into aging reactors that are helping lower emissions.

New York committed nearly $1 billion in multiyear subsidies in 2016 to keep open three upstate reactors whose electricity was critical to the state’s clean energy goals. Illinois and New Jersey followed with support plans of their own.

Illinois provides $235 million annually to Exelon Corp. to keep its Quad Cities and Clinton nuclear plants running, and it must decide whether to pay additional support to preserve Exelon’s Byron and Dresden plants.

"Without urgent action we are going to lose vital zero-carbon energy sources that provide billions of dollars of economic value to Illinois families and businesses as well as thousands of jobs," Exelon said in April.

In the same month, the New Jersey Board of Public Utilities approved $300 million to come from ratepayers to fund zero-emission subsidy credits to forestall the threatened closure of three nuclear plants in South Jersey. It was the second set of payments, covering three years of operations.

The subsidy adds about $4 a month on the bill of an average residential customer.

Opponents said the Public Service Enterprise Group, the plants’ owner, had failed to show financial need for the assistance. "The BPU sold out the ratepayers and renewable energy today by going along with this unnecessary nuclear subsidy," the New Jersey Sierra Club stated. "This giveaway is about greed and not need."

But the Clean Air Task Force noted the two reactors at the Salem nuclear plant and the Hope Creek reactor collectively provide 94% of the state’s zero-carbon emissions, crucial to achieving the state’s goal of 100% clean energy by 2050.

Matt Crozat, NEI senior director of policy development, said he expects a federal PTC, if enacted, would be about the same level that states have approved.

Sen. Ron Wyden (D-Ore.), chair of the Senate Finance Committee, joined by 25 colleagues, has introduced the "Clean Energy for America Act," which would consolidate 44 different energy tax subsidies into a general clean energy tax benefit that would include nuclear plants. Operators of clean electricity generation could receive up to 2.4 cents per kilowatt-hour or an investment tax credit of up to 30%.

The state support levels "have been successful in keeping these plants in operation," Crozat said, and similar federal credits would be "a tailwind" for the industry.