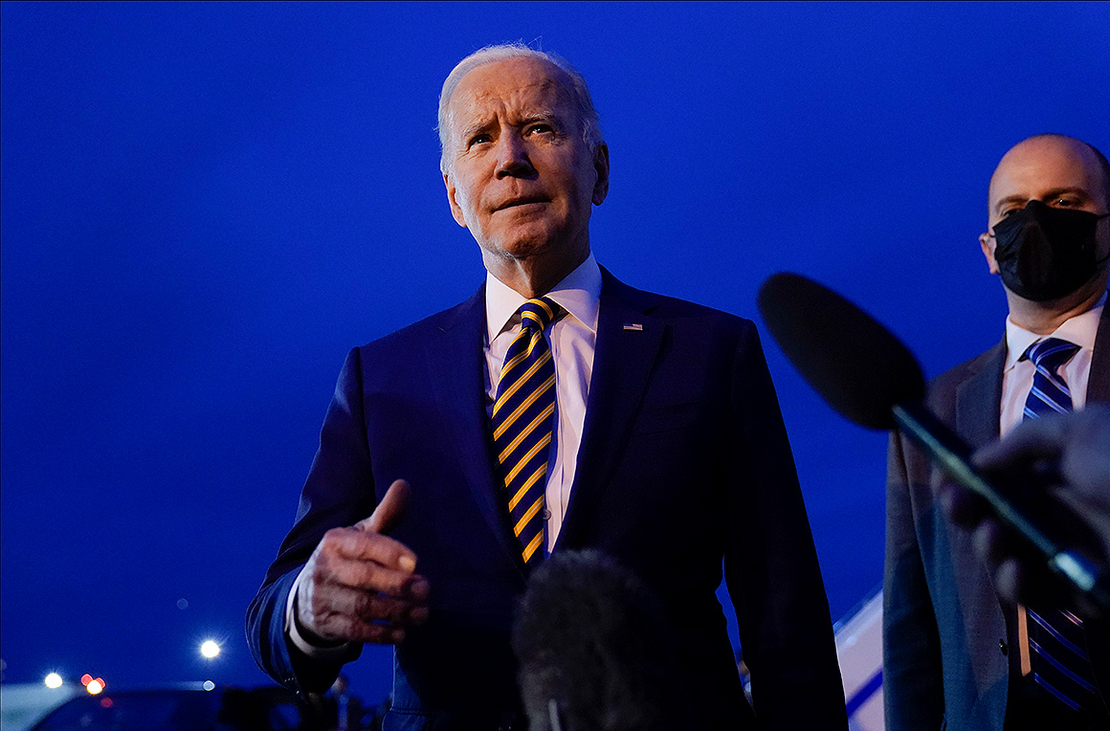 President Biden speaks to members of the media before boarding Air Force One. AP Photo/Carolyn Kaster

President Biden’s executive order to decarbonize federal agencies last week left unanswered questions about which energy industries — including emerging technologies like hydrogen — will benefit most and how federal agencies will go about complying.

Because of the federal government’s sheer size, the order — which covers everything from federal buildings’ level of energy efficiency to the fuels they use for space and water heat — could reshape the economics of building energy policy in the public and private sectors for years to come. That, in turn, could influence debates over banning the use of natural gas, which continue to roil statehouses and city halls across the country. It also could sway emissions, considering buildings are a significant source of U.S. greenhouse gases.

"The main thing this [plan] will do is to help show, by example, that building electrification is possible," said Amy Turner, a senior fellow for the Cities Climate Law Initiative at Columbia University’s Sabin Center.

The federal government, with its over 300,000 buildings, "may be able to benefit from economies of scale" when it buys clean heat technologies, she said.

The order called for the federal government to halve greenhouse gas emissions from its own buildings by 2032 — then hit net zero by 2045. That goal was packaged into a broader directive for federal agencies to stop buying vehicles and electricity that emit carbon, at varying dates in the future.

A top priority, according to the Biden administration, will be ditching fossil fuel equipment in new and existing buildings in favor of electric-powered technologies — an idea that has spurred bitter debates between climate activists and gas utilities in states and cities across the U.S.

But the administration’s plans didn’t prescribe electrification in all cases, leaving room for other technologies to meet its definition of “net-zero” emissions.

That means the natural gas industry’s favored alternative fuels, like hydrogen or biomethane, could presumably play a role at some point in the future. The definition of "net zero" also allowed for some amount of offsets, including through natural carbon sinks, carbon capture and storage, and direct air capture.

When asked about the plan, Karen Harbert, president and CEO at the American Gas Association, said the nation’s gas utilities and gas pipeline systems would be "essential to meet any net-zero goal."

"Eliminating natural gas and our delivery infrastructure forecloses on current and future innovation opportunities," she said.

Stephen Comstock, vice president of corporate policy at the American Petroleum Institute, struck a similar tone, saying his group would "continue working with the administration" on climate policy.

He encouraged policymakers to incorporate "a wide range of technologies and energy sources" into the implementation of the buildings goals, rather than issuing "prescriptive mandates."

The economics of electric heat pumps and water heaters also may not be immediately favorable when compared with natural gas, since the technologies lose efficiency in colder climates.

Still, the concept of replacing natural gas with huge volumes of cheap, low-carbon hydrogen and biomethane, and channeling them through a retrofitted system of pipelines, remains mostly untested.

Victor Olgyay, a principal with the carbon-free buildings team at RMI, reckoned that electricity would supplant natural gas for nearly all federal buildings’ heat, over time.

"Hydrogen has a place, probably, in more industrial applications," he said. "But it’s really a little bit of cutting butter with a chainsaw to think that’s what’s necessary in buildings."

"I think, in general, the default of using either high-carbon electricity or using natural gas for heat is probably on its way out," he said.

The executive order and accompanying strategy documents also call for the first federal performance standard for buildings’ energy efficiency as well as more on-site generation of renewable electricity, and deep retrofits on at least 30 percent of existing facilities by 2030.

The order also convenes a new seven-agency working group to figure out how to implement the net-zero goal. And it requires all federal agencies to submit their compliance plans to the Council on Environmental Quality and Office of Management and Budget.

The plan calls for the federal government to use its procurement power to bring down the price of clean technologies.

Electric heat pumps may be the most important of those, given that they’re used for heating spaces — typically the top source of energy demand in buildings.

If federal agencies start buying heat pumps in bulk, it’s likely to help develop the market for them, by bringing down costs for private sector building owners and creating a skilled workforce for installations, Turner said.

"That would be a good thing, because then the government may be able to prove the market," said Turner.

Biden’s order might not immediately change the politics at stake in local natural gas ban fights around the country, however.

In 2019, the city of Berkeley, Calif., passed the nation’s first law banning the use of natural gas in homes.

That strategy subsequently spread throughout California and isolated cities in other states. Last week, environmentalists and City Council-members in New York City announced they had enough votes to pass a law banning gas in most new buildings starting in 2023, for example.

Gas utilities, however, have fought back, helping enact "preemption" laws in 20 states that prohibit cities from restricting natural gas use, according to a tally by the American Gas Association.

While a federal government shift to net-zero buildings could change the technology market, states and cities tend to control most aspects of buildings policy.

Those city- and state-level debates may grind on, regardless of Biden’s executive order, said Turner.

Over the long term, however, developing the markets for clean tech will change the terms of those debates, making it likelier for policymakers to support a shift away from natural gas, she added.

"I don’t think the executive order itself will push [local] policymakers to change their minds," she said.

But “if the effect of the executive order is helping develop the market, then cities and states will say, ‘Oh, we’ll do this, too.’”

The Biden administration’s push to use federal buildings as a test bed for decarbonization mirrors to some extent what the Obama administration tried — and failed — to do.

A 2015 executive order from Obama, for example, called for federal buildings to derive 25 percent of their total energy consumption from clean energy sources and cut energy use by an annual 2.5 percent.

In 2018, however, those goals were revoked by former President Trump, who replaced those specific percentage reductions with vaguer orders to use less energy.

Last January, Biden revoked what Trump had put in place, before laying out the broader plan for net-zero building emissions last week.

Over the past decade, the energy use of federal buildings has come down only slightly, according to performance data from CEQ.

The U.S. government also has blown past the date by which it was supposed to have achieved a 30 percent improvement in per-square-foot energy efficiency, under a 2007 law signed by former President George W. Bush.

That law, known as the Energy Independence and Security Act (EISA), called for 3 percent reductions in energy use per year, through fiscal 2015. As of 2020, it still hadn’t hit the mark sought for 2015.

Obama’s goals for clean energy met a similar fate. Renewable electricity, or certificates purchased for renewable electricity, made up 9 percent of federal facilities’ consumption in 2020 — a higher percentage than the year when Obama signed his executive order, according to the CEQ data.

Emissions from creating federal buildings’ heat and hot water, as well as from their "stationary combustion," have also remained level in recent years, the data shows.

"There’s been progress made since 2007, but for people like me it’s not fast enough," said Olgyay of RMI, in reference to decarbonization of buildings.

EISA, with its mandates for drawing down federal agencies’ energy use, remains on the books, he noted.

"Now, this executive order gets us closer to that."