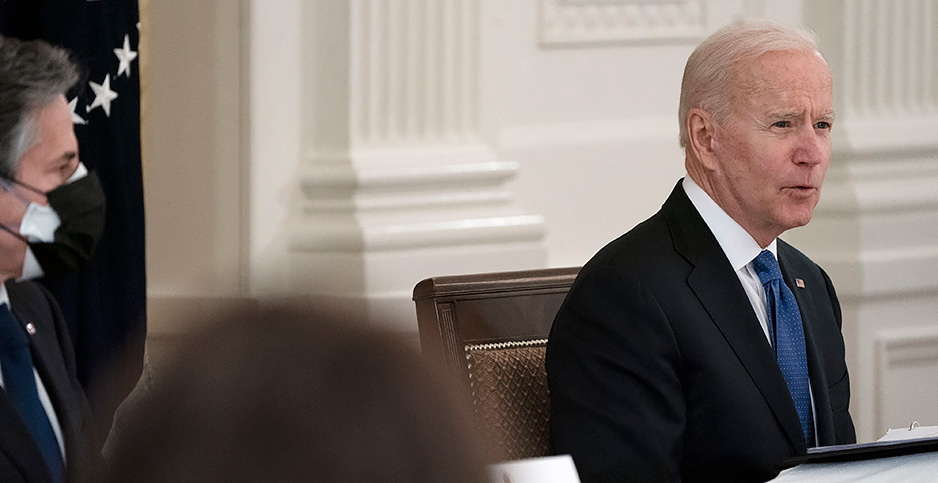 President Biden has pitched the clean energy portions of his $2.2 trillion infrastructure proposal as offering a break from past energy policies that harmed or ignored historically disadvantaged communities. ABA/Newscom

The Biden administration’s $2.2 trillion infrastructure plan promises to seed a transformation toward a more democratic energy system, but its embrace of "next-generation" technologies may spark environmental justice battles, analysts say.

In his proposal to Congress last week, President Biden pitched his request as a break with the country’s history of exclusionary energy policies, particularly those biased against people of color.

"Like great projects of the past, the president’s plan will unify and mobilize the country to meet the great challenges of our time: the climate crisis and the ambitions of an autocratic China," Biden’s proposal said. "But unlike past major investments, the plan prioritizes addressing long-standing and persistent racial injustice."

The American Jobs Plan is peppered with ways to promote fairness across lines of race and class in energy policy, in topics including the electric grid and public transit.

But it also contains a handful of ideas that are facing pushback over whether they’d address pollution in historically disadvantaged neighborhoods.

As part of his plan for America’s power infrastructure, the Biden administration outlined building "next-generation industries in distressed communities." Among those are 10 demonstration projects, dubbed "pioneer facilities," that would test carbon capture systems on steel, cement and chemical production plants.

Other pilots might include "decarbonized" hydrogen — a term that would leave room for renewable hydrogen as well as "blue" hydrogen — paired with a newly created production tax credit, the plan said. "Blue" hydrogen is produced from natural gas and uses carbon capture.

Those projects could be spurred partly by public funds. The language proposes $15 billion in demonstrations for "[research and development] priorities" that include carbon capture and hydrogen.

However, many of the proposals were panned by environmental justice advocates and left-leaning environmentalists, who said the ideas would undermine Biden’s aim of "building back better" and fail to address legacies of inequality.

"To say that an investment in carbon capture is benefiting a [distressed] community is misguided thinking," said Basav Sen, co-chair of an energy democracy work group for the Climate Justice Alliance, a national environmental justice umbrella coalition.

Similarly, Jim Walsh, a senior energy policy analyst at Food & Water Watch, said the inclusion of renewable hydrogen in Biden’s plan was an attempt at "subsidizing dirty energy development and propping up the fossil fuel industry."

Carbon capture retrofits applied to natural gas power plants and gas-fueled hydrogen production wouldn’t prevent releases of harmful pollutants — particularly nitrogen oxides (NOx) — that can affect nearby residents’ health, Sen and other advocates said. NOx exposure has been linked to an increased prevalence of asthma, according to EPA.

Nor would carbon capture and storage retrofits combat emissions of methane, a global warming agent that can leak during fossil fuel extraction and transportation, advocates argued.

Carbon capture proponents say that view is unfair, arguing that a ramp-up of CCS across the country will lead to improved systems to neutralize local contaminants like NOx as well as CO2.

"The solution is to deploy carbon capture, address the CO2 emissions and some other pollutants, and then take specific measures to address the other pollutants that remain," said Brad Crabtree, director of the Carbon Capture Coalition, in an interview last week. "That’s how we need to look at this.

"We can do both, and we have a moral obligation to do both," he added.

In a January memo to Biden’s climate team, the Carbon Capture Coalition — a group of over 80 organizations backing the technology — also addressed environmental justice concerns, while noting the challenge of making generalizations about carbon capture’s impact on pollutants.

"You foul the carbon capture systems if you do not manage for other, non-CO2 pollutants," said Crabtree.

The White House did not respond to a request for comment, but the American Jobs Plan states that the 10 proposed CCS pilots would ensure "that overburdened communities are protected from increases in cumulative pollution."

Cleaning up industries like steel and cement would lead to better air quality for local communities, NRDC analysts wrote in a blog post. Early-stage demonstration projects like the ones called for by the president would be "critical to jumpstarting industrial decarbonization as facilities are otherwise reluctant to take the risk of being the first plant" to adopt new technologies.

The BlueGreen Alliance was more cautious. "This is a historic first step, and yet we know this and more will be needed to deliver the scale of investment needed, particularly in disadvantaged communities and for workers and communities impacted by energy transition," the group wrote in a statement Wednesday.

Julie McNamara, an energy analyst at the Union of Concerned Scientists, struck a similar note, saying in an interview she was "glad to see the Biden administration reckoning with industrial sources of CO2 emissions," while cautioning that more comprehensive plans would be needed for local communities and industrial decarbonization as a whole.

Some environmentalists aren’t just opposed to CCS and hydrogen produced from fossil fuels, though. They also express concerns that "green" hydrogen, made by splitting hydrogen from water using wind or solar power, could release high levels of NOx. That could be the case, say researchers, if the hydrogen is combusted directly — to create electricity, for example — instead of being fed into a fuel-cell system, as in hydrogen cars and trucks.

In a few states, local environmentalists have drawn lines in the sand and taken a mostly critical approach toward "green" hydrogen. In New York, for example, some advocates have branded it a "false solution" for climate change.

New demonstrations of hydrogen and carbon capture would provoke local opposition in states across the country, he predicted.

"I won’t speak for them everywhere, obviously, but there seems to be concerted unity among environmental advocates that we don’t want false solutions," he said.

The debate over whether hydrogen and CCS will feature heavily in Biden’s environmental justice plans may play out within the administration itself.

Biden has pledged to carve out 40% of all clean energy "benefits" for disadvantaged communities, and he has created advisory councils of environmental justice advocates to define what that pledge should mean and how it can be translated into concrete policy.

Those councils are just beginning to meet, and they have months until their final report comes due. It’s unclear what role hydrogen and CCS may have in their vision.

The Department of Energy has also hired its first-ever deputy director for energy justice, Shalanda Baker, whose job is focused on making sure communities aren’t left behind or harmed by energy projects.

Baker — then a law professor at Northeastern University — was among the authors of a 2020 Center for Progressive Reform report on environmental justice that raised a warning flag about carbon capture, calling on policymakers to give "lower priority to carbon reduction strategies that increase harmful co-pollutants."

The study noted that carbon capture and sequestration "could, according to some studies, increase co-pollutant air and water emissions, in part because CCS is itself energy-intensive."

DOE’s fossil energy division has acknowledged criticism that carbon prolongs the life of fossil fuels but says the administration is committed to incorporating environmental justice into its plans.

Talati, a former senior policy adviser at the nonprofit Carbon180, which advocates for carbon removal technology, stressed the importance of "recognizing that carbon capture isn’t just for fossil fuels; it’s for the industrial sector, it’s for mitigating emissions on the path to net zero. On our path to transitioning from fossil fuels, we have to have a way to eliminate those emissions, and that’s what point source carbon capture offers."

With the addition of Baker, Talati said, "DOE for the first time has hired a deputy director of energy justice, who is focused on justice issues, and we are working with them to integrate these kinds of considerations as we think about demonstration and deployment for carbon capture."

The latest hydrogen and CCS details are part of a Biden proposal that calls for investing hundreds of billions of dollars in other clean energy technologies, like electric cars and battery manufacturing. And although the plan faces an uncertain path in Congress, technology demonstrations — particularly those for fossil fuels — have often drawn support in the past from Republicans and moderate Democrats.

Biden climate advisers John Kerry and Gina McCarthy have courted the fossil fuel industry as well, partly by emphasizing the possible role of emergent technologies like hydrogen. And large utilities are pushing for policies to boost hydrogen, including types that would use carbon capture.

"[The coalition’s] members believe that clean hydrogen has a critical role to play across all sectors if we are to achieve decarbonization objectives," wrote Shannon Angielski, spokesperson for the group, in an email to E&E News. She added that the group looked forward to working with the administration and Congress on legislative details.