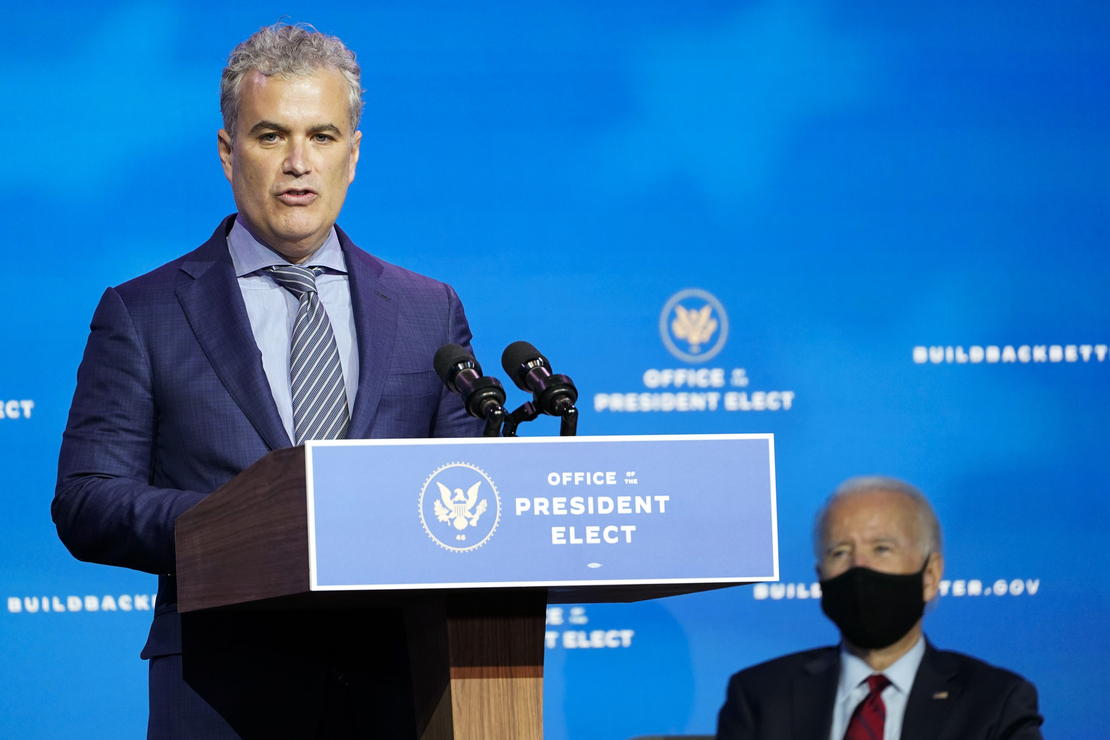 Jeff Zients speaks during an event with President-elect Joe Biden at the Queen theater in Wilmington, Del., on Dec. 8, 2020. AP Photo/Susan Walsh, File

If Jeff Zients had gotten his way, the federal government would look very different by now.

Zients, who’s now expected to take over as Biden’s next White House chief of staff, became the first federal chief performance officer in 2009. Obama announced in January 2011 — just after Republicans took control of the U.S. House — that Zients would lead a major effort to streamline and modernize the government.

Zients’ big plan, announced with much fanfare in January 2012, would have merged six agencies focused on business and trade, the Small Business Administration, and other business and trade functions across the government with the Department of Commerce. He proposed moving NOAA — housed under Commerce — over to the Interior Department, sparking a backlash from some environmentalists (E&E News, Jan. 13, 2012).

“The government we have is not the government we need,” Zients said during a news conference at the time. “The last major reorganization of the whole government was done more than a half-century ago, led by Herbert Hoover. Since then, agencies have been layered on top. Rarely has an agency been downsized or eliminated.”

That government reorganization plan was the first of a series that would come from Obama, Zients said at the time. The administration asked Congress to grant the president special authority to consolidate government programs.

That never happened. Republicans in Congress weren’t interested in bolstering Obama’s authority and Zients moved from Obama’s budget office to lead the White House National Economic Council. Government experts say the plan was a long-shot to begin with, noting that sweeping plans to streamline the government are often discussed but almost never completed.

As Biden’s incoming chief of staff, Zients is poised to become one of the most powerful people in the federal government. He’ll be in a position to sway everything from agency reorganization efforts and budget negotiations to the president’s efforts to limit greenhouse gas emissions through executive actions.

The former businessman and management expert is well-equipped for the chief of staff role, particularly as the administration focuses on implementing major pieces of legislation, said Max Stier, founding president and CEO of the Partnership for Public Service, who has known Zients for about 14 years.

White House chiefs of staff are often experts on legislation, politics and communication, Stier said. “The fact that Jeff has so much experience in government and so much experience on the management side, I think will do him and do our country a lot of good.”

Zients is set to take over for Biden’s chief of staff Ron Klain, whose White House legacy includes working to help secure the passage of the massive climate and energy law known as the Inflation Reduction Act. That law includes nearly $370 billion in federal investments for climate and renewable energy programs.

As Klain prepared to enter the White House as chief of staff in January 2021, he told incoming Biden aides that climate change was one of four “overlapping and compounding crises” that the nation faced, along with Covid-19, an economic crisis and a racial equity crisis. Klain told staffers in a memo that Biden would move swiftly to “address the climate crisis with the urgency the science demands and ensure that science guides the administration’s decision making.”

In a tweet Friday summarizing Biden’s accomplishments during his first two years on the job, Klain referenced the “most sweeping legislation enacted by any govt on Earth to combat climate crisis.”

Zients isn’t nearly as prolific on Twitter as Klain, and his views on energy and climate policies aren’t as well known in Washington policy circles. But some climate and clean energy advocates expect that the Biden team will stay the course on its environmental policies with Zients in the chief of staff’s office.

A “handoff from Ron Klain to Jeff Zients will ensure that climate remains at the top of the president’s agenda,” said David Hayes, who served as Biden’s special assistant for climate until last fall.

“The first two years of the administration have set the course for climate — both administratively and legislatively,” Hayes said. “Now it’s all about execution, and protecting the wins. There’s no more worthy successor to Ron Klain than Jeff Zients to oversee and guide that effort.”

The White House press office did not respond to a request for comment about Zients’ role in the Obama-era government reorganization effort or about his likely role in shaping Biden’s energy and environmental policies.

Zients will become chief of staff as the administration is focused on rolling out the climate law in a way that maximizes emission reductions. He’ll work closely on that effort with John Podesta, another veteran of the Obama White House who joined the Biden team last fall to oversee the climate law’s implementation.

Biden’s incoming chief of staff also worked closely during the Obama years with Brian Deese, who is now director of Biden’s National Economic Council. Zients and Deese co-wrote an op-ed in 2016 titled, “Enlist the Market in the Climate-Change Fight.”

As deputy director of the Obama Office of Management and Budget, Zients was called up to Capitol Hill to testify before lawmakers surrounding the bankruptcy of the Solyndra solar company that went bankrupt after receiving a loan guarantee from the Energy Department (E&E News, Sept. 14, 2011).

Zients has critics, including Jeff Hauser of the watchdog group Revolving Door Project, who warns that Zients’ track record as a businessman and investor make him unfit for the job. “The Biden administration has been at its best when it has been on the attack against corporate excesses that wide majorities of Americans find abhorrent,” Hauser said in a statement.

Still, Zients appears to have Biden’s full confidence. “He is a man of service and an expert manager,” Biden said last year as Zients was stepping down from his post leading the administration’s Covid-19 response.

“There is no one better at delivering results than Jeff,” Biden said.