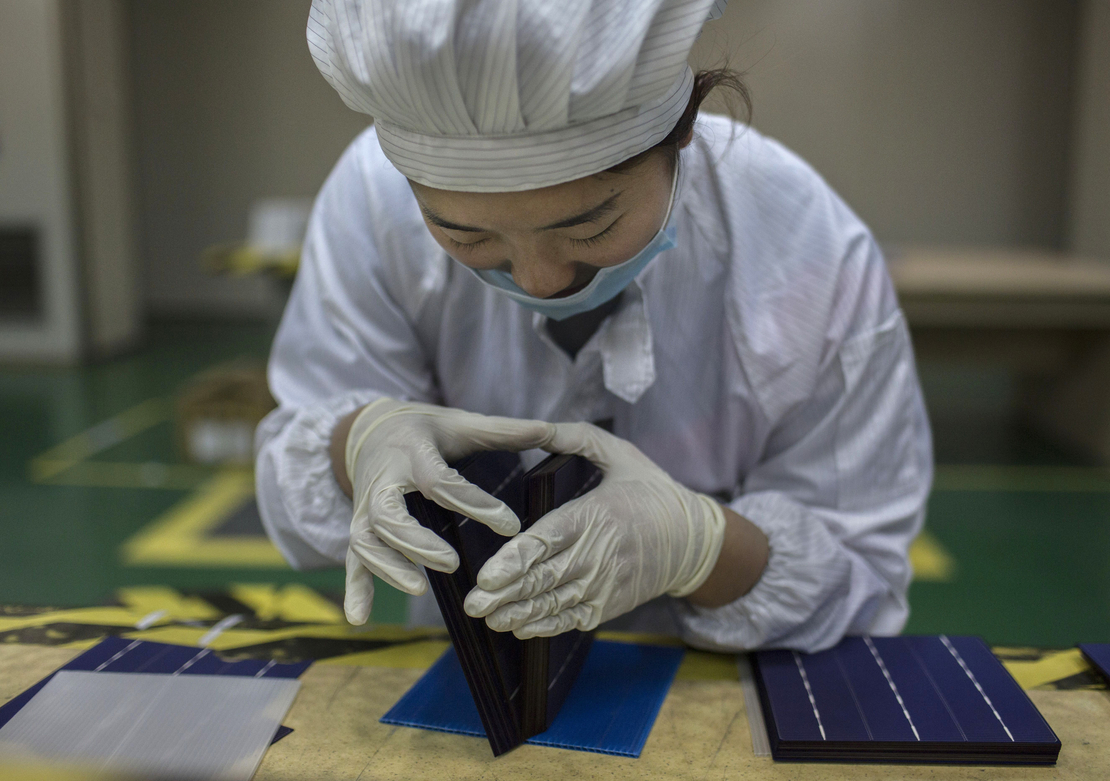 A technician in China checks a cell used in solar panels on a production line in Hebei province. Kevin Frayer/Getty Images

The Biden administration has pushed for renewable energy to be made in America as a way to address climate change and create U.S. jobs at the same time.

But when it comes to solar power, the plan may make cutting emissions a lot more expensive.

So suggests a landmark study in Nature that concludes it may be “difficult or impossible” for the United States to comply with Paris climate goals if it tries to break away from Chinese-made solar supplies in favor of American manufacturers.

While the analysis does not focus on President Joe Biden specifically, it highlights a debate about whether policies aiming to boost domestic manufacturing could dampen the effectiveness of the climate law. It also comes as questions rise about U.S. strategy on alleged human rights violations in the Chinese region of Xinjiang, a global production hub for the solar industry.

According to the study, if three major countries — the United States, China and Germany — impose “strict nationalistic” policies for solar power, it could cause the average cost of a panel to be 20 to 25 percent higher by 2030 than it would be otherwise.

“What this study tells us is if we’re serious about fighting climate change, policymakers need to implement policies that promote collaboration across global value chains with regard to scaling up low-carbon energy technologies,” said John Helveston, the lead author of the paper and an assistant professor of engineering management and systems engineering at George Washington University, in a statement. The analysis is the first to quantify the cost savings of a globalized value chain for the solar industry, the researchers said.

About 78 percent of the world’s solar panels and cells were produced in China in 2021, according to European researchers. For some precursor components, China’s share of the global market climbs even higher, into the 90th percentile.

That has resulted in large part from the “free flow” of Western resources into China such as financing for startups, collaborations with Chinese researchers and innovative lab-scale technologies, the study said.

Federal officials are currently weighing new tariffs on Chinese solar imports, a strategy they have employed periodically over the past decade to boost domestic manufacturing. The Nature research team also examined ideas that have only surfaced under Biden, such as the use of the Defense Production Act to guarantee contracts for domestically produced solar equipment. Additionally, the paper considered the effect of policies such as restrictions on cross-national research and development as well as barriers to cross-border investment.

If the United States and other countries were to enact such policies, they could lead to slower “learning processes,” referring to how the solar industry learns from experience to sell power more cheaply while using better technologies, according to the authors.

“The world needs costs to continue to fall for these critical components, and placing restrictions on their use in the U.S. could jeopardize those cost reductions,” wrote Helveston in an email.

The findings are equally true for wind power, electric vehicles and other forms of low-carbon energy, the authors said. As policymakers plan ways to achieve carbon neutrality by 2050 as called for by the Paris Agreement, “they should recognize that these aspirations may be difficult or impossible to achieve without globalized low-carbon supply chains,” the study said.

Some advocates of made-in-America solar policies were critical of the study’s methods, however.

Todd Tucker, director of industrial policy and trade at the Roosevelt Institute, a progressive think tank, said the analysis is wrong in presenting two types of markets — national and global — as polar opposites.

“They create a very stark contrast between two states of the world that just aren’t reflective of reality,” he said.

In doing so, the authors were excluding “intermediate solutions” such as diversifying the world’s base of solar manufacturing while continuing to import from around the world, including from countries considered more friendly to the United States, added Tucker.

He cited projections suggesting that the Inflation Reduction Act would get the United States about two-thirds of the way toward its Paris goals (Climatewire, Aug. 11). “This [study’s] argument would have been a little more persuasive a few months ago” when the passage of major climate policy seemed doubtful, said Tucker.

Continuing to rely on solar imports, by contrast, risks “exposing the nation to supply chain vulnerabilities while simultaneously losing out on an opportunity to increase the number of good paying jobs that come from the energy transition,” she added.

China’s dominance as a solar manufacturer has already affected the price of panels in the U.S. and other countries.

The Nature study authors concluded that American solar developers were able to save $36 billion from 2008 to 2020 as a result. Solar modules would have been more than twice as expensive for American companies, if the United States, China and Germany had all sought to protect local manufacturers, the study found.

But the solar industry’s tight links to China may be on the verge of loosening: The Biden administration and both parties in Congress have treated China’s manufacturing muscle as something to be countered.

For Republicans, the industry’s links to China — in particular, to forced-labor programs that press Uyghur detainees into jobs at solar-equipment factories — has served as a line of attack on the administration’s clean-energy ambitions (Energywire, Oct. 5).

The Biden administration has ramped up customs enforcement since the summer of 2021, blacklisting one Chinese solar producer and confiscating shipments of panels suspected of links to forced-labor systems.

But it has also repeatedly described U.S. solar manufacturing as a source of green jobs for American residents and a means of protecting the country’s energy security from geopolitical disruptions. The administration has either backed or is considering a much wider array of made-in-America policies that were criticized by the study’s authors.

For instance, a Sept. 15 order from Biden directed a special committee of trade officials to review whether a foreign firm’s investments in U.S.-based clean energy would be detrimental to national security. That is an example of something that “would create barriers to cross-border investment” needed to scale up solar, said Gang He, a study co-author and assistant professor in the Department of Technology and Society at Stony Brook University.

New tariffs on solar imports could have negative effects on prices as well, said Michael Davidson, a study co-author and assistant professor at the School of Global Policy and Strategy at the University of California, San Diego. The Commerce Department is considering new duties on solar panels and cells coming from four Southeast Asian countries, with an initial decision due in late November. The Treasury and Commerce departments did not comment on the record for this story.

Tucker of the Roosevelt Institute said past rounds of solar tariffs had come with flexibility for developers via carve-outs and loopholes.

“I’m not that worried about the solar deployment industry not having the imports it needs to meet its goals,” he said. “Policymakers know they have to walk and chew gum at the same time.”

Will the climate law work?

The Solar Energy Industries Association, a trade group dominated by developers, has fought bitterly against new import tariffs, arguing that they would hurt growth in installations.

But the group has praised new incentives for U.S. solar manufacturers in the Inflation Reduction Act, including the first production tax credits for U.S. producers of panels, cells and a long list of panel components. The credits could jump-start as much as 50 gigawatts of new production capacity for made-in-America solar products, according to SEIA. That amount would multiply current production levels several times over (Energywire, Aug. 19).

John Smirnow, vice president of market strategy and general counsel at SEIA, responded to the Nature study by saying it was “entirely possible” to create “balanced solar supply chains … without the kind of cost increases that would jeopardize the world’s climate ambitions.”

“There is no question that a stronger U.S. solar supply chain will offer our country a measure of energy and economic security, but there will always be a place for an ethical globalized low-carbon solar supply chain,” he said in a statement.

The Nature study team was generally supportive of the climate law’s tax credit policies for solar, including for manufacturing. Davidson of UC San Diego said the incentives mirror “some of the pillars of China’s solar industry success.”

Yet he and his co-authors looked less favorably on policies that make tax credits available to solar developers and electric vehicle manufacturers that use a certain percentage of American-made products. Davidson called those EV requirements “problematic” in an email to E&E News.

Jones-Albertus from the Energy Department said the climate law has led to billions in new U.S. solar-factory investments, “showing the growing enthusiasm” for domestic manufacturing.

The law’s tax credits would allow U.S. producers to sell modules and components at prices low enough to compete with imports, she argued.

As a result, “solar supply chains will be diversified without costing consumers any more to buy U.S.-made solar modules,” said Jones-Albertus.