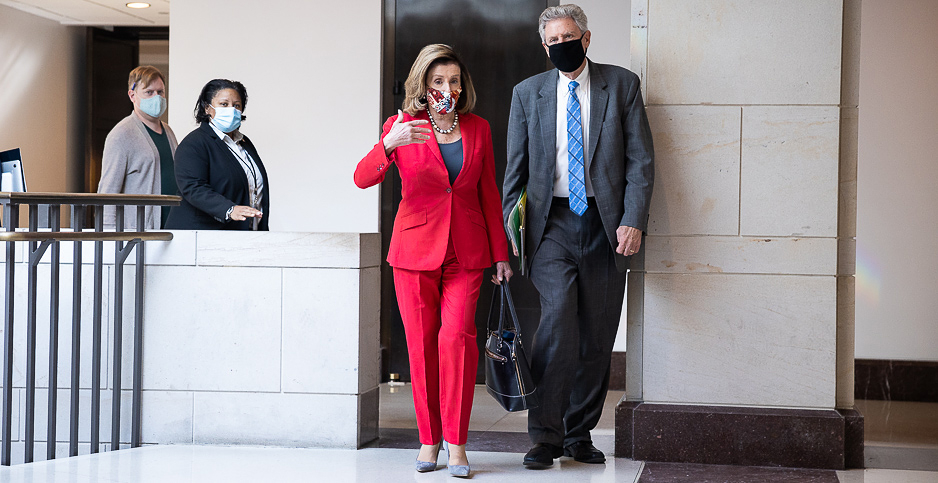 The sweeping $2 trillion infrastructure and clean energy recovery plan laid out by President Biden yesterday borrows heavily from a familiar assortment of Democratic climate proposals in recent years, while flipping the script on the long-standing tradition of tapping user fees to pay for roads and bridges.

The "American Jobs Plan" detailed by Biden in Pittsburgh yesterday adopts a multitude of Democratic clean energy and climate policies that have been percolating on Capitol Hill, a move that may ease the assembly of the massive package in the months ahead.

"The House is already at work to advance a transformational infrastructure package," noted House Speaker Nancy Pelosi (D-Calif.) in a statement that praised Biden’s plan as a "visionary, once-in-a-century investment in the American people and in America’s future."

But the White House proposal to pay for the ambitious plan by raising corporate tax rates and limiting companies’ abilities to shift profits overseas represents a marked departure from the tradition of dedicating certain user fees and taxes to fund infrastructure projects.

It’s a political gambit that is already drawing pushback from the business community and Republicans, raising the stakes for efforts to win bipartisan buy-in for the centerpiece of Biden’s early climate agenda.

Rep. Sam Graves (R-Mo.), ranking member of Transportation and Infrastructure Committee and one of a handful of Republicans who huddled with Biden in the Oval Office last month to talk infrastructure, blasted the plan as "a multitrillion-dollar partisan shopping list of progressive priorities, all broadly categorized as ‘infrastructure’ and paid for with massive, job-killing tax increases."

Graves said in a statement, "Such tax hikes couldn’t come at a worse time, with the economy fighting its way out of this pandemic."

The infrastructure plan has gotten generous praise from Biden’s fellow Democrats, and that may be because it reinforces climate action already pitched in Congress.

Rather than offering a brand-new framework, Biden opted for a package built upon legislative proposals that have floated on Capitol Hill for the past few years.

The presidential package acts more as an endorsement for existing legislation than White House-centric climate ambitions.

A top example of that is the White House’s embrace of a clean energy standard. Biden included that policy in his campaign platform along with a host of other clean energy infrastructure and carbon pricing ideas.

Democrats on the House Energy and Commerce Committee, however, have zeroed in on the standard as the best policy lever to transform the country’s economy to reach net-zero emissions by 2050.

Biden’s pitch remains vague on what a clean energy standard should look like, leaving room for Democrats to fill in the blanks.

"I commend the president for including a national Clean Electricity Standard in his plan that meets the same aggressive targets of the CLEAN Future Act and the investments necessary to make it a reality," E&C Chairman Frank Pallone (D-N.J.) said in a statement, referencing the committee Democrats’ climate bill (E&E Daily, March 19).

"The rest of the world is already embarking on a major transition to clean technology, and this plan positions us to not only compete but to lead the pack," he said.

The White House proposal also raises the profile of a "Clean Energy and Sustainability Accelerator" through an allotment of $26 billion for the clean energy financing tool.

That idea has circulated around Congress for years, with Rep. Debbie Dingell (D-Mich.) leading the legislative effort in the House and Sen. Chris Van Hollen (D-Md.) in the Senate.

Congress passed massive spending authorization boosts for clean energy research and development as part of the first comprehensive energy bill to pass the chamber in over a decade late last year.

The Biden plan would infuse $35 billion — or five times DOE’s annual research budget — in clean energy and innovation R&D. For the House’s top energy appropriator, that came as welcome news.

The plan would extend for a decade the renewable production and investment tax credits, currently slated to lapse under a 2015 tax deal.

Biden’s plan would also create a new investment tax credit for energy storage — a top priority of Democrats and multiple clean energy interests in recent years — as well as an expansion of the 45Q tax break for carbon capture and sequestration, and a new incentive for building transmission lines.

In a nod to a growing call from lawmakers and advocates, Biden’s proposal would allow a direct pay option for a host of energy taxes to ease financing woes brought on by tax equity markets frozen by the COVID-19 pandemic.

While incorporating a host of clean energy tax ideas from lawmakers from both parties, the White House proposal is notably silent on a top priority of Senate Finance Chairman Ron Wyden.

The Oregon Democrat has a plan to scrap much of the existing energy tax code in favor of three technology-neutral incentives for electricity, transportation and efficiency.

In a statement, Wyden noted areas of agreement between himself and Biden, including eliminating fossil fuel subsidies and providing incentives for clean energy production and manufacturing.

Still, Wyden made clear he will press forward with his own strategy. "I will continue to push my comprehensive energy tax overhaul, which would scrap our hodgepodge of 44 energy tax breaks and replace them with a technology-neutral, emissions-based system," Wyden said.

"This proposal is key to achieving our climate goals and should be the linchpin of our efforts in the Senate," said the Finance chair.

Biden’s proposal deviates significantly from the user-fee model that has historically paid for surface transportation programs through the Highway Trust Fund.

There’s been bipartisan backing — and support from the business community — for increasing the federal gas tax for the first time since the 1990s, but Biden’s plan instead calls for raising corporate tax rates to 28%.

The president also wants new limits on companies’ ability to shift profits abroad to tax havens and other tax avoidance mechanisms, and is calling for the elimination of unspecified fossil fuel tax breaks.

Both the U.S. Chamber of Commerce and the National Association of Manufacturers (NAM) applauded Biden’s plan for going big on infrastructure investments but took issue with the proposed pay-fors.

"Properly done, a major investment in infrastructure today is an investment in the future, and like a new home, should be paid for over time — say 30 years — by the users who benefit from the investment," Bradley said in a statement.

On Twitter, Bradley noted that 31 states since 2013 have increased user fees to finance infrastructure, adding that electric vehicles should contribute as well.

NAM also pointed to user fees and bond financing as preferable pay-fors. "Raising taxes on manufacturers would fundamentally undermine our ability to lead this recovery," said NAM President and CEO Jay Timmons in a statement.

Biden’s plan to raise $2 trillion to pay for the plan over 15 years also represents a departure from the long-established practice of using 10-year budget windows for scoring, which may complicate the parliamentary calculus if Democrats use budget reconciliation to advance the package, as expected.

While defending the plan’s pay-fors, a senior administration official told reporters Tuesday that the president is open to other funding mechanisms.