How ‘Big Solar’ jumped from rooftops to farm fields 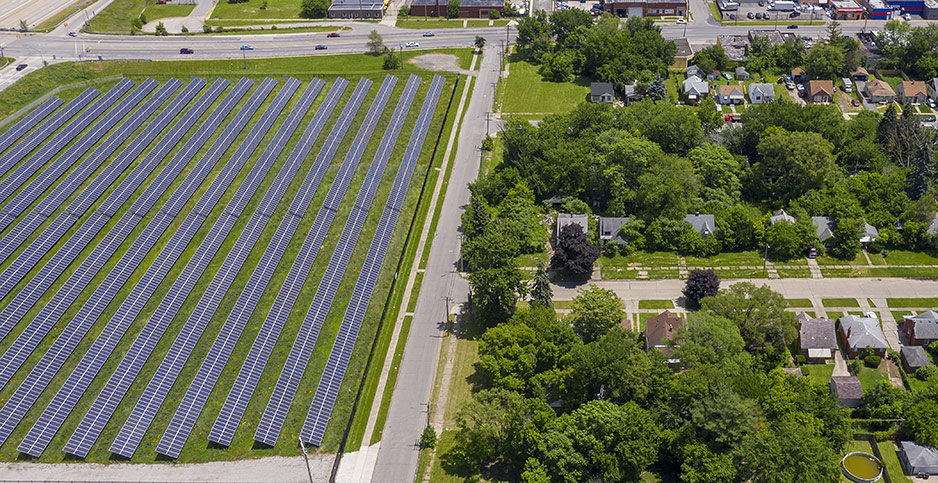 A 2-megawatt solar installation was built on vacant land in Detroit, making it one of the largest urban solar facilities in the U.S. The fast pace of solar's growth has created friction in some communities. Jim West/Zuma Press/Newscom

First in a three-part series.

The town council of Midland, N.C., was facing what it felt was a bizarre and costly invasion in April 2017. Solar energy companies were planting arrays of solar modules on nearby farmland, and the council was trying to stop it.

One 40-acre project had already been permitted by Cabarrus County, which surrounds Midland (population 3,692). Now a second company had arrived, proposing a 627-acre solar farm. One Midland councilman, Darren Hartsell, described that as a "tremendous footprint." He worried about "safety of the people who live close by and the valuation of their homes."

Another councilman, Rich Wise, agreed with him. "People don’t want to build [homes] on property that close to a solar farm."

Midland’s complaints fell on deaf ears. Cabarrus County officials were looking at a $130 million project that promised as much as $265,000 in annual tax revenue. They found no safety hazards to neighbors, in part because almost no one lived nearby, and the county issued the permit in June 2017.

Eighteen months later, the solar farm was up and running. The facility, built by Recurrent Energy LLC, was feeding enough electricity to an area utility to supply 12,000 homes. Then, last month, Recurrent Energy sold the farm to an investment firm and went back to work on a backlog of other utility-size solar photovoltaic projects it’s developing in the U.S.

All told, the speed was phenomenal when compared with financing and building conventional power plants fueled by natural gas or coal.

Welcome to the exploding world of what some people are calling "Big Solar."

The possibility of making electricity from sunshine by using materials such as silicon was first expressed by Edmond Becquerel, a French physicist, in 1839, but global development of the solar industry required the longest windup in modern energy history.

The industry finally emerged in earnest at the beginning of this century, catapulted forward by concerns about climate change. In almost every year since 2007, the progress of selling large-scale solar farms to utilities and other major corporations has been record-breaking. The efficiency of solar technology has increased and its costs have plummeted, now reaching the point in most sunny areas of the world where it is equal to or cheaper to make electricity from sunshine than it is from coal. Solar is also becoming competitive with natural gas.

According to a study by Wood Mackenzie, a U.S. energy consulting firm, by the end of this year, the global demand for solar power will crack 100 gigawatts for the first time. That goal seemed like an impossible dream, even to scientists, a decade ago.

"Everyone in the field is just stunned about how low the costs have come down. Now it costs just 20 cents a watt to make a solar panel. … It used to cost 50 cents around the 2011-to-2012 time frame. There’s a lot of competition, and that’s driving things," said Wyatt Metzger, a physicist and principal scientist at the Department of Energy’s National Renewable Energy Laboratory.

"Solar was considered this small, dreamy market, but around 2007 a lot of people began to see this as a real business," Metzger explained in an interview.

Before then, one of the prime materials for making solar panels — silicon — was viewed as being more valuable for making semiconductor chips used in computers and other electronic devices. The fledgling solar industry often used recycled materials and relied on buying used equipment from companies making computer chips to build the modules for solar arrays.

Then demand for modules began to explode. By 2015, as more countries and companies grew interested in solar power, the outlines of Big Solar began to appear as demand for utility-size solar farms, which can supply thousands of homes, surpassed the collective demands for rooftop solar arrays.

The U.S. solar sector now employs twice as many people as coal does, according to Metzger. The impact of clean energy is most pronounced in five states, led by California, which gets about 20% of its electricity from solar, followed by Nevada and Hawaii, each of which gets over 10%. They’re followed by a number of states like Vermont and Massachusetts that are approaching that level of solar power.

Metzger and other close observers of the solar industry believe that the 2019 growth still marks early days for the global growth of solar, as surprising as that may seem. "Where we are in 2019 at 100 GW of solar will seem like a tiny speck 10 to 20 years from now."

Mike Arndt, managing director of development for Recurrent Energy, which developed the solar project in Cabarrus County, agreed that the future is brighter than the present. He started his career in renewable energy selling wind power and recalled that the business was driven by renewable portfolio standards, subsidies set by each state for a certain amount of renewable energy.

"For 15 years there has definitely been skepticism over the value of renewables," Arndt said. That period, he thinks, ended with the falling price of solar, making it an economic decision by states and communities about how competitive they want to be with other markets that offer low-cost electricity.

He said there are a "few handfuls" of large companies like his that can develop big projects quickly, obtain agreements from major utilities to buy solar energy and then sell the completed solar farms to investor groups, such as the British firm that recently bought the Cabarrus County solar farm.

Recurrent Energy is based in the U.S., but it’s owned by Canadian Solar Inc., an Ontario-based company that gets over half of its solar modules from manufacturing and research facilities it owns in China. At this point, China leads the world in solar module production.

One of Recurrent Energy’s latest projects is intended to multiply the competitive power of solar power against other ways of producing electricity, Arndt said. That’s because it will connect a large solar farm to big lithium-ion batteries that can store electricity. The move is intended to make solar more competitive with conventional utilities.

"In California, there is so much solar power generated in the middle of the day that it amounts to overgeneration. That’s why storage makes sense. With batteries you can dispatch it at night when people come home from work, turn on their TVs, turn up their air conditioning a little bit. At that point in the day, we’re seeing traditional solar power starting to drop off, but if you have batteries, you can bridge that gap," Arndt explained.

The Slate "photovoltaic-plus-storage project" being built in Kings County, Calif., will connect two community utilities to enough solar energy to power 37,500 homes during the day. When it is completed in 2021, it will have batteries designed to store and supply an additional four hours of solar electricity, filling power needs until around 10 p.m., after which electricity demand falls off sharply.

"Storage makes sense in a lot of markets," Arndt said. "It’s a carbon-free solution that produces energy when needed. It’s easy to install. With the addition of storage into the solar market, you take all of the questions about when can solar electricity be generated. That all comes off the table, and this industry will continue to grow in the next 10 to 20 years."

Arndt said he believes the biggest opportunities for Big Solar and energy storage will appear in Texas, a state that has never offered subsidies or quotas for solar energy the way California has. Texas is one of the nation’s biggest states for wind power "and soon will be so for solar, and it’s all going to be based on economics," Arndt said.

Will a subsidy-free market be part of the next growth spurt for solar energy? China, which leads the world market, has begun to cut government subsidies for the production of solar modules. So have a number of European countries as production costs have dropped.

This could happen in the U.S., as well. At the end of this year, an investment tax credit for solar projects that Congress created in 2006 begins to phase out. Initially designed to reimburse buyers for 30% of the cost of a new solar array, the incentive will shrink to zero for owners of residential systems and to 10% for owners of commercial systems by 2022.

In November, the House Ways and Means Committee proposed a five-year extension of the 30% solar ITC and new incentives for energy storage.

In a statement, Abigail Ross Hopper, president of the Solar Energy Industries Association, said that since the 2006 subsidy was established, the U.S. solar industry has grown by more than 10,000%, "creating hundreds of thousands of jobs and investing billions of dollars in the U.S. economy."

Next: How China created "Big Solar."