How carmakers are crafting the EV-charging experience 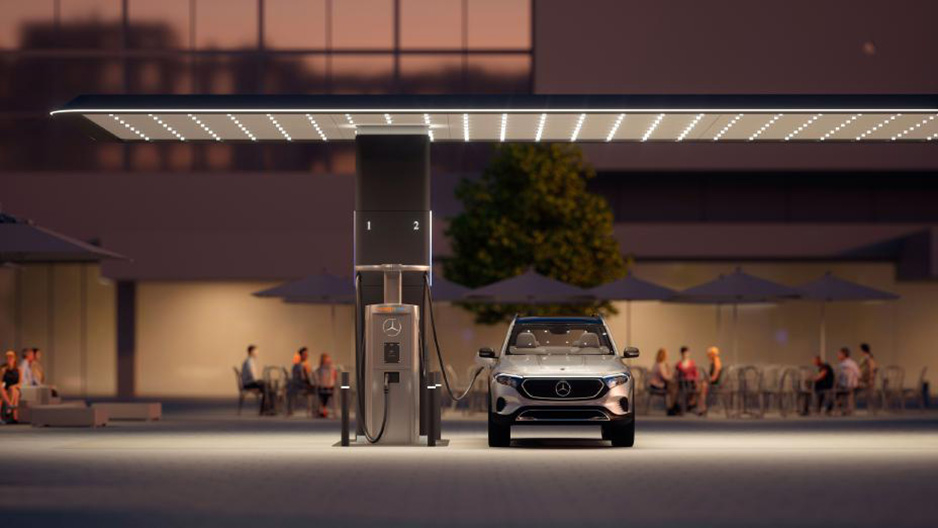 Mercedes-Benz wants to build 400 electric vehicle charging plazas across North America, becoming the latest automaker to wager that relevancy in the EV age means putting your name on the charging block.

The network, announced Thursday at the CES technology show in Las Vegas, adds Mercedes-Benz Group AG to a roster that includes General Motors Co., Volvo and Rivian Automotive Inc. — and of course Tesla Inc., which predates them all.

If all the Tesla followers make good on their plans, by the end of the decade tens of thousands of public charging points across North America will be linked to car companies. The carmakers’ actual role in the charging experience is minimal, but they share a common intent: building trust in the charging network in general, and their brand in particular.

“They recognize that they want to create an experience that’s going to compete in the marketplace,” said Ben Prochazka, executive director of the Electrification Coalition, a nonprofit EV advocacy group.

He added that Mercedes, which trades on a luxury image, “is demonstrating that premium brand, but in an electric way.”

All of these charging networks follow the playbook of Tesla, which since the company’s early days has created a premium experience for its drivers through its Supercharger network.

Unlike Tesla’s plug plazas, which bar other users and are intended only for Teslas, these chargers are meant for use by any EV — though drivers of the right kind of car will have an experience that’s just a bit better. Mercedes, for example, went to pains to point out the advantages that will accrue to Mercedes owners.

“The charging network will focus first and foremost on Mercedes-Benz customers, who will enjoy preferential access via a reservation function and other benefits,” Mercedes said in its announcement. “However, it will also be open to drivers of all other brands with compatible technology.”

The Mercedes stations are also meant to be a cut above, if computer renderings are to be believed. The company distributed images of stainless-steel charging pedestals emblazoned with the Mercedes’ three-pointed star, situated under a canopy with solar panels on top and tasteful LED lighting beneath.

Mercedes left little doubt that the charging station is nearly as much an ambassador of the brand as the car itself.

“The company believes this strategic move will significantly enhance the usability and convenience of its new generation of electric vehicles, differentiate the Mercedes-Benz ownership experience and accelerate the EV transformation,” the company said.

This kind of industry sponsorship is enthusiastically endorsed by EV advocates, who realize the charging network needs all the funding it can get to enable an economywide switch to electric vehicles.

“Every single new charger deployed right now is crucially important to the task of accelerating this transition,” Al Gore III, the new executive director of the Zero Emission Transportation Association, a Washington, D.C.-based EV trade group, said in a statement to E&E News. “The benefits of these investments are enormous and extend well beyond simply unlocking sales.”

Most automakers are not taking the lead in actually building the banks of chargers that bear their names.

That task usually falls to a charging equipment provider, which does the work of finding a host; brokering the legal and real estate arrangements; working with a power company to wire the site; building the station; and handling the customer financial transaction, repairs and customer service.

Volvo last year opened the first of a chain of fast-charging locations that will stud the route from Seattle to Denver at Starbucks coffee shops. The heavy lifting is being done by ChargePoint Holdings Inc., a charging provider that is also the lead partner on Mercedes’ network.

The automaker provides some level of funding for the stations, which can cost upward of $300,000 each. In return, it often gets access to charger usage data, which can help an automaker fine-tune its future cars to the emerging fueling network.

Mercedes and virtually every other automaker have said they intend to seek help from the federal government in building at least some of their stations.

The prime source of funds is the $7.5 billion that Congress approved in 2021 in the Infrastructure Investment and Jobs Act. The first priority of that program is to build out a comprehensive highway charging network, followed by sites in cities.

Datz wouldn’t share the details of Volvo’s arrangement with ChargePoint and Starbucks, but he was clear on what the chargers were meant to communicate.

“We thought we’d send a message that we’re going to put these chargers in a … place that is safe and familiar and comfortable,” he said.

The size and type of locations of automaker-affiliated networks in North America vary depending on the ambition of the company and the flavor of its brand.

The biggest planned non-Tesla network is that of General Motors. With a large family of brands that run from budget to upscale — from Chevrolet to Cadillac — its network is intended for many types of customers.

For fast chargers, which are meant to mostly fill a battery in half an hour or less, GM has committed to help build more than 5,200 charging stalls across the country. More than 3,000 of those are in cities and suburbs, while 2,000 are intended for highway service stations affiliated with truck stop operator Pilot Flying J.

Alongside that, GM has said it will propagate 40,000 chargers through a “Community Charging” initiative with its dealer network. These chargers, meant to exist at highly visible sites in the dealership’s service area, will in many cases be slower chargers, which are much cheaper to build and take many hours to recharge a car.

The Mercedes commitment is the next biggest.

The German automaker intends to put more than 2,500 charging plugs at over 400 locations in North America by 2027.

The locations are “key cities and urban population centers,” and sites near highways as well as retail centers and Mercedes dealerships, according to its announcement. Each station will be capable of delivering 350 kilowatts of electricity, as fast as the quickest chargers now available on American roads, and beyond what most EVs on the road today are capable of accepting.

Mercedes said the project will cost €1 billion, or about $1.07 billion. It is splitting that cost 50-50 with MN8 Energy, a solar and storage provider created by the Wall Street giant Goldman Sachs Group Inc.

Meanwhile, new electric truckmaker Rivian Automotive Inc. is building a network that focuses on outdoor destinations and the routes to those sites. Rivian’s goal is to install 3,500 charging points at 600 locations.

None of those projects approaches the scale of Tesla, which has 1,800 fast-charging stations in the U.S., according to the Department of Energy’s Alternative Fuels Data Center.

To date, charging stations have been more financial liability than asset. Low usage combined with expensive bills from electric utilities have meant that most lost money.

Yet Mercedes seems convinced that its charging stations will not be an albatross, but an advantage that will accrue to its shareholders. The “global reach and prime locations of its charging network means it is also likely to become an asset in its own right,” Mercedes said.

One assumption is that the combined value — of charging provider plus retail establishment plus automaker — can provide a benefit for each player, even if the charger itself isn’t making much money.

“You can make more money on a $7 caramel macchiato than the charging session,” said Pasquale Romano, the CEO of ChargePoint, when asked a few months ago about his company’s arrangement with Volvo.

“You don’t need to make all site profit” on charging, he said.