How clean tech is molding a modern indigenous community 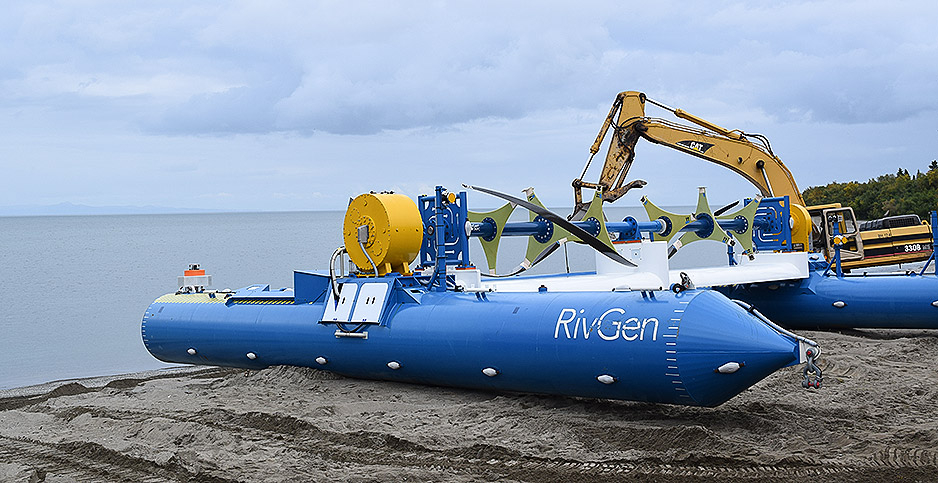 IGIUGIG, Alaska — A state-of the-art, twin-turbine, river-bottom hydroelectric generator sat on the beach at the wild end of North America.

Pulled onto the sand for repairs, the RivGen Power System resembled a catamaran — two bright yellow and green turbines attached to two blue, 50-foot pontoons. Sunk back into the Kvichak River for the winter, the machine will send power to shore via medium-voltage cable. At a depth of 16 feet, the turbines have yet to affect salmon, a dietary staple and spiritual talisman for the people of Igiugig.

The RivGen is just part of Igiugig’s high-tech fight to save an ancient way of life.

The village sits nearly 250 roadless miles southwest of Anchorage, where Iliamna Lake — Alaska’s biggest body of fresh water — funnels into the Kvichak, the source of more red salmon than anywhere else on Earth.

In Yup’ik, Igiugig means "like a throat that swallows water."

Igiugig Village Council President AlexAnna Salmon has learned the language of her elders is deeply rooted in the place where her ancestors have lived for millennia.

Home, however, is changing.

The tundra transforms with climate change as Costco items flown in from Anchorage invade freezers once stuffed with salmon and caribou. Rural Alaska has always been a harsh place to live, but for decades, jobs and the convenience of the outside world have shrunk Alaska Native villages.

Seventy people now live in the village, double the population of the 1980s.

Salmon and her sister, Christina Salmon-Bringhurst, who both hold multiple elected offices, are among a small group of villagers who have dedicated their lives to creating a self-sufficient, modern and indigenous community.

"We’re the norm," said Salmon, a Dartmouth College graduate who sits on the borough planning commission, directs a 13-village cultural program, and leads Yup’ik language education and preservation. Her sister is the village’s ace grant writer. Both work for the Igiugig Native Corp., which is responsible for development on 66,000 tribal acres.

Igiugig is connected by a few gravel roads and a dirt airstrip. Like most of rural Alaska, the village relies on diesel generators. It features one lonely gas pump, but "fuel ladies" top off every family once a month.

"This way nobody runs out in the middle of winter," said Salmon-Bringhurst.

Diesel must be flown in thousands of gallons at a time, driving prices up to $7 a gallon. Necessity has made renewable energy, like the RivGen project, appealing.

In June, Igiugig became the first tribal entity to receive a Federal Energy Regulatory Commission permit for a non-dam hydroelectric pilot project, a decade after it partnered with Ocean Renewable Power Co.

The Maine-based company spent years designing and testing prototypes to withstand the mighty, icy river, buoyed in 2018 by a $2.3 million grant from the Department of Energy.

"Get it in the water and things happen that you didn’t expect, and so you modify it," said Karl Hill, Igiugig Village Council vice president and a board member for the regional Bristol Bay Native Corp.

The RivGen project is just part of Igiugig’s push for a sustainable microgrid.

Options are limited. Long, dark winters make solar panels difficult. With a multimillion-dollar grant from the Gordon and Betty Moore Foundation, Stanford University and the University of Alaska, Anchorage, selected the village to test experimental vertical axis wind turbines, but no design has withstood winds that whip up to 100 mph off Iliamna Lake.

The goal, Hill said, is still a turbine array big enough for most of the village.

"Before we do that, we want to make sure that they’re not going to be big lawn ornaments," he said.

The town already has plenty of junk cars, boats and the main forms of village transportation — snow machines and four-wheelers. Each vehicle made the long, expensive trip by barge across Cook Inlet from Homer, Alaska, over a 15-mile road and then back onto a barge across Iliamna Lake.

"Once something gets shipped out here, it’s not getting shipped back," Salmon-Bringhurst said. "When things are broken down, everything is saved for parts."

‘We can already tell’

With only a few barges landing a year, the village beach is mostly a playground of kayaks and paddleboards.

"If you ever need to find the kids in the summer, they will all be here swimming," Salmon-Bringhurst said, looking out across the crystalline expanse of Iliamna Lake.

Running water came to Igiugig only in recent decades — "I hand-washed a lot of clothes," Salmon-Bringhurst said — but everyone still fills coolers from the lake and river.

"It’s so delicious, no one can drink chlorinated water," Salmon-Bringhurst said.

A major portion of the daily diet in Igiugig comes from the water. Fish are such a central part of life that little red salmon swim across the village seal.

Subsistence is also necessary when the alternative is flying in food from Anchorage.

On top of work, village residents must carve out time throughout the year for caribou and moose hunting, berry picking, and collecting tern and seagull eggs. "Somehow the village still runs," Salmon said.

Climate change has begun to wrench those natural cycles.

This summer, triple-digit temperatures caused fish kills in the Ugashik River on the other side of Bristol Bay, and drought conditions led to several rare wildfires, including one just south of Igiugig.

The village received $80,241 in federal Bureau of Indian Affairs
resilience funding this year to conduct a climate adaptation assessment. Wildfire was identified as a top threat. The village has also tapped into University of Alaska, Fairbanks, climate modeling data.

"We’re partnered with them for technical assistance to give us an idea of how our climate is changing here, but we can already tell," Salmon said.

The timing of salmon runs, berry blooms, bird migrations and even insect seasons is off. Iliamna Lake, once a winter highway, has not frozen over in several years. Less snow and more rain stymies critical snow machine traffic.

In Igiugig, the tundra itself has changed. "If you look at a picture of our old village site from 1919, there were no trees," Salmon said.

Caribou, which ate and trampled vegetation down to lichen and brush, have moved elsewhere, replaced by moose.

"The climate’s effect on our subsistence way of life is the biggest change we’re going to be facing," Salmon said.

Along with harnessing renewable energy, Igiugig has started to grow its own food to supplement subsistence.

What started as a community garden has become a greenhouse, farm and chicken coop, powered by horizontal wind turbines.

Produce sales are on Fridays; elders get free eggs, and the rest are sold. Residents must drop off their compost. Salmon-Bringhurst’s husband, Jeff, runs the operation.

He arrived in town as a schoolteacher, an outsider fresh off a stint teaching in Port Heiden to the south. "I’d heard great things about this place," Bringhurst said.

Schools are the lifeblood of rural Alaska, providing steady jobs and community, but if enrollment drops below 10, state funding is cut. School closures often lead to abandoned villages. But Igiugig School is up to 20 students, enough to fill two classrooms and "No-See-Ums" basketball teams.

"That’s big for us," Salmon-Bringhurst said.

Her father, Dan Salmon, a New Yorker who stumbled across Igiugig working for the Alaska Department of Fish And Game and never left, was a big reason for the decades of steady growth. He died in a bush plane accident in 2008.

"Christina and AlexAnna picked up the torch," Bringhurst said.

With four kids of his own, he has stopped teaching but has no plans to leave Igiugig. Beyond the greenhouse, he works as a commercial fisherman with Hill and serves as a handyman on any project his wife helps bring to town — all of them intended to sustain a vibrant, indigenous community.

"It didn’t take me very long to wish I could clone the Salmon sisters and a few other people and transplant them to some of the communities we have in the area," he said. "Capacity and leadership is something that we struggle with."