How co-ops are bringing solar power to rural America 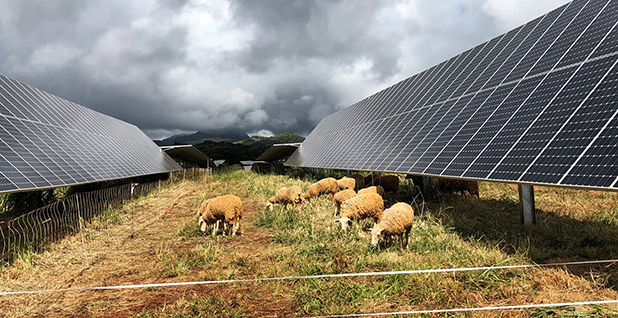 The second in a two-part series. Read the first story here.

In 2014, the National Rural Electric Cooperative Association studied what some of its members saw as a touchy subject: local electricity powered by the sun.

NRECA, based in Arlington, Va., is the trade association for 900 local rural electric co-ops that came to life in 1942, when its members were dependent on coal. Many derived 70 percent or more of their power from coal, while just 1 percent of co-ops had gone beyond experimenting with solar as late as 2013, according to a survey at the time.

Only 20 percent of its 42 million members seemed interested in having more solar power.

But things began to change quickly.

By 2015, as Donald Trump was launching his political ambitions with a promise to revive the U.S. coal industry, multiple co-ops were building larger solar arrays and finding innovative ways to get communities to plug into them. This year, the solar footprint of U.S. co-ops will have grown 10 times as large in four years, a journey NRECA describes in a recent report titled: "The Solar Revolution in Rural America."

It began as a tough slog. Polls showed that co-op members viewed solar as exotic, difficult to manage and, above all, too expensive on a communitywide scale. As one member of a co-op focus group insisted: "Signing up can’t result in a net loss to my wallet."

The coal dependency started during the Great Depression and was reinforced in the 1980s when the co-ops built a system using co-op wholesalers. These are centrally located coal-fired power plants with long-distance transmission lines that spread electricity over 56 percent of the nation’s land mass. The system is financed, in part, by very long-term power contracts that limit local co-op power production to 5 percent or less.

But these contracts began to grate on local co-ops. Some of them were inviting outside companies to help them develop local renewable energy, particularly solar. One co-op based in Taos, N.M., waged a yearlong struggle with its wholesale co-op supplier, Tri-State Generation and Transmission Association Inc. of Westminster, Colo., to break its contract and replace it with a commercial power provider and a communitywide solar program.

The dispute had some nasty moments and involved $150 million worth of damage claims by the co-op power supplier, which accepted $37 million in a legal settlement. Jim Spiers, a newly arrived vice president at NRECA in charge of business and technology strategies, had been an executive at Tri-State and was involved in the early stages of the Taos matter, which he recalled as "part of a family discussion."

But imposing limits on local renewable energy has recently triggered discussions outside the co-op "family." Last month, Colorado’s Public Utilities Commission said it would look into a complaint by another local co-op, the Delta-Montrose Electric Association of western Colorado. It asserts that Tri-State’s limit on local solar energy is unfair.

Tri-State has responded by suing Delta-Montrose in local court, asking it to enforce the contract.

"These issues all come down to how our members relate to one another and share costs within the association," explained Lee Boughey, a spokesman for Tri-State. He said the contract was a private matter between Tri-State and its 43 local co-ops.

Meanwhile, Virginia’s General Assembly has waded into the issue by raising a cap imposed on local co-ops, going from 1 percent on local solar energy to 7 percent.

Another co-op "family discussion" has been to find paths to more renewable energy at all levels. Under Spiers, NRECA’s 2014 study of solar power morphed from an exploration into a "big education project," he said.

It was aimed at what might be needed if the price of solar-powered electricity came down. NRECA began working with a small group of local and wholesale co-ops. It published training manuals like "The Communicator’s Toolkit," which suggested ways to minimize the risk of using solar while capturing its benefits.

That was timely because in 2015 the price of solar energy began to crash. "We happened to be in the right place at the right time to pull together our co-ops," Spiers explained in an interview.

Previously, the niche for solar in rural areas was mainly individuals putting rooftop solar on their homes. The new goal that emerged among co-ops was to connect as many local members as possible to nearby arrays.

Some members lived in apartments without solar. Co-ops developed "virtual net metering," which meant customers could still buy access to a solar project and get credit on their utility bill without connecting to the array.

Meanwhile, Tri-State has built the largest wholesale solar supply system serving co-ops in the United States, even as it has tried to limit the amount of solar that co-ops can generate. Another wholesaler, Great River Energy of Maple Grove, Minn., built 19 solar arrays that served co-ops across the breadth of the state.

Then Great River had to figure out how to manage its system to cope with cloud patterns that slowly drifted across the state, cutting electricity at one co-op and increasing it at another.

The Poudre Valley Rural Electric Association in northern Colorado built two solar arrays that were quickly sold out. Then it developed a cheaper third array by bringing in an outside group called Grid Alternatives that used volunteers and donated materials. That helped Poudre attract more low- and moderate-income families and nonprofits.

Finding cleaner, closer power sources has helped trim NRECA’s traditional reliance on coal from 54 percent in 2014 to 40 percent in 2017.

The champion in this race to innovate is probably Kauai Island Utility Cooperative in Hawaii, which began its peculiar journey of discovery in 2002. That was when a local group bought the Kauai power plant from a Connecticut company and turned it into a rural electric cooperative.

The buyers wanted local control and ownership of the island’s power system. At the time, over 90 percent of its electricity was generated by diesel fuel imported from the continental U.S. That tied electricity bills to the global price of oil, gyrations that gave the island the most expensive electricity in the United States.

Hawaii enjoys legendary amounts of sunshine, but the cost of turning it into electricity by 2008 still seemed prohibitive. Nonetheless, the co-op’s board of directors rolled out its strategic plan. It was to reach 50 percent renewable energy by 2023. "That was a stretch. Nobody knew how we are going to get there at the time," explained Beth Tokioka, communications manager for the co-op.

The co-op started with a trickle of hydroelectric power and then began burning wood from eucalyptus trees to generate steam. By 2014, the price of solar energy began to drop. That gave it room to maneuver. Kauai scrambled to build small solar arrays. By 2016, the co-op had built enough to provide 100 percent solar-generated power during the peak of the day.

As the price for solar kept dropping, the Kauai co-op began bidding on solar storage batteries, which were expensive but not nearly as expensive as power made from imported diesel. Tokioka said Kauai operates the world’s first solar storage system applied to a community power grid.

The 29,000-member co-op built two of them and is developing a third storage system now. This year it will hit its 50 percent renewable goal for day and nighttime power, three years ahead of the time it predicted in 2008.

Kauai is now moving to add a more exotic source, a pumped storage facility. It will use solar-generated electricity during the day to pump water up to the top of a mountain. At night, the water will drop down into generators, spinning them to create electricity. That could push the island’s renewable power into the 90 percent range. (Pumped storage is popular because the project has opened up more of the island’s land for agricultural uses, Tokioka noted.)

Banking on its homemade renewable energy, the co-op is beginning to flourish, going from an almost 100 percent debt to a 30 percent equity position. The state of Hawaii has recently set a goal of developing 100 percent renewable energy by 2045. Kauai will now hit 90 percent in four to five years and reach 100 percent over a 24-hour cycle "well before 2045," predicted Tokioka.

"But who knows how technology is going to evolve in the meantime?" she added.