How coal failed in the Texas deep freeze 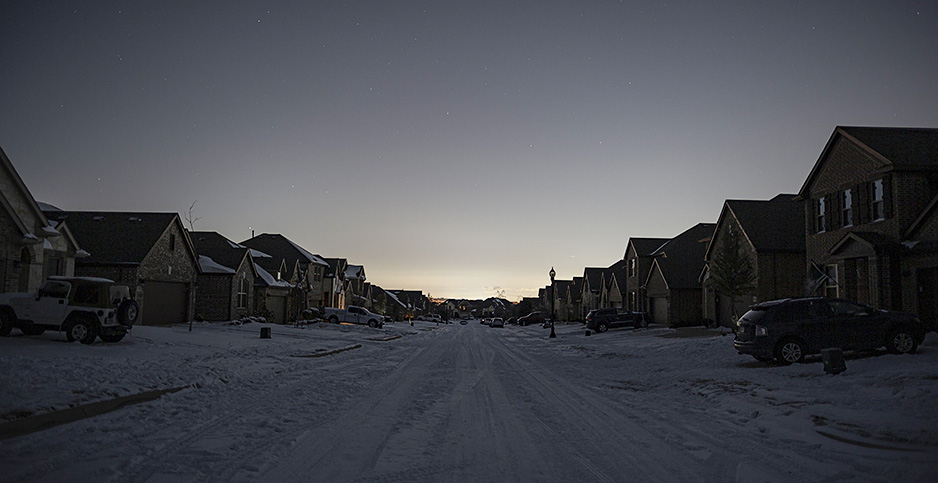 A large number of coal-fired power plants had to shut down during the deep freeze in Texas last month. Dark houses line a neighborhood street in Argyle. Chris Rusanowsky/ZUMAPRESS/Newscom

W.A. Parish is one of the largest coal plants in America and a longtime workhorse for the Texas power grid. But when arctic temperatures descended on the Lone Star State last month, the plant’s four coal boilers were mostly missing in action.

The massive facility wasn’t alone. When electricity demand surged on Feb. 15 and 16, about a third of the coal capacity in Texas’ primary power grid was unavailable.

At W.A. Parish, one 610-megawatt unit was already offline when the deep freeze arrived. Another was shut down for planned maintenance. That left just two operable units. Both struggled to keep going in the cold, with each going dark for more than 24 hours during a crisis that saw more than 4 million homes and businesses without power.

"The main reason that coal plants are sticking around is to provide power when we need it the most: the coldest times of winter and the hottest times of summer," said Daniel Cohan, an associate professor who studies the power sector at Rice University in Houston. "And yet, again and again and again, when there was a disaster to strike in Texas, the coal plants haven’t been there for us."

Those problems point to a struggling industry. As competing fuels have eroded coal’s economic advantages in recent years, the industry has claimed that coal is more reliable than natural gas and renewable energy during extreme weather events because it’s stored on-site.

But the disaster in Texas shows that is not always true.

In planning for winter demand peaks, the Electric Reliability Council of Texas (ERCOT), the grid operator, estimated it would have roughly 13.6 gigawatts of coal power available during an extreme winter event.

But 3.8 GW of coal capacity was offline at 11 a.m. Feb. 15, when electricity demand surged to roughly 76 GW, according to preliminary ERCOT outage figures.

During a similar surge in demand the next morning, the number of coal outages grew to 4.5 GW. Neither of those figures include the extended outage of the 610-MW unit at W.A. Parish. That means about 32% of ERCOT’s coal was unavailable on the morning of Feb. 15. The next day, as Texas continued to reel under frigid conditions, the amount of offline coal rose to 38%.

Coal plants have long formed the backbone of the state’s power grid, along with gas. But growing competition from gas, wind and solar has increased the number of coal retirements in recent years.

Those challenging economics help explain why Texas coal plants were ill-equipped for the cold.

"No one would think about investing money to winterize a coal plant, particularly if you think it is going offline somewhat soon," said Joshua Rhodes, a research associate with the Webber Energy Group at the University of Texas, Austin.

Coal was hardly alone in its struggles. Gas plants, which provide about half of the state’s electricity, struggled with fuel deliveries as wellheads froze and pressure in gas pipelines fell. The gas system’s failures have been a primary focus of inquiry for Texas policymakers investigating the crisis.

The reasons for coal plant shutdowns during the crisis were varied.

At Oak Grove, a coal plant completed in 2011, coal piles froze solid, according to Vistra Corp., the plant’s operator. Oak Grove’s two 855-MW units tripped offline the evening of Feb. 15 and were unavailable for most of the following day, according to ERCOT data.

NRG Energy Inc.’s Limestone plant suffered a large frequency event, the company said in testimony to lawmakers. One of Limestone’s 836-MW units was offline for 10 hours on the morning of Feb. 15 and operated at roughly half capacity from Feb. 16 until Feb. 18, according to ERCOT data.

NRG also operates W.A. Parish, the massive coal plant outside Houston. The company said two of Parish’s coal units were down for about 24 hours because of "weather related issues." An NRG spokesperson declined to elaborate. ERCOT data shows one unit went down on the morning of Feb. 15 while the second went dark on the afternoon of Feb. 16.

The state’s primary grid operator continues to investigate plant outages across its system. ERCOT CEO Bill Magness told state lawmakers Tuesday that a number of generating units went offline on the night of Feb. 14 and the morning of Feb. 15. The rest of the week was no different. Units were lighting up and going dark like lightning bugs.

"There was a tremendous amount of instability in the system," Magness said. "And, again, the causes for that we’ll be looking at as we get more and more data."

But it’s unclear how many coal plant operators would participate, given the economic and regulatory uncertainty facing the coal industry. At the same time, more coal plant closures could leave Texas more reliant on natural gas during extreme weather events.

"We are replacing a lot of assets that can perform when you ask ’em to with renewables," he said. "We’re investing in renewables. I don’t have a problem with it. But when you do that, in any market, you actually need more reserve margins."

In recent years, Texas has seen fossil fuel plants close while renewable facilities have come online, Morgan said. He likened the dynamic to "watching a train wreck happen" in slow motion, though he acknowledged that power plants hadn’t "knocked it out of the park" during the February crisis.

Others took a different view. Cohan, the Rice professor, said Texas could easily replace its coal capacity with a mixture of wind, solar and storage "if the gas system functioned as it is supposed to."

"There is no reason coal has to stay around to keep the lights on," he added.