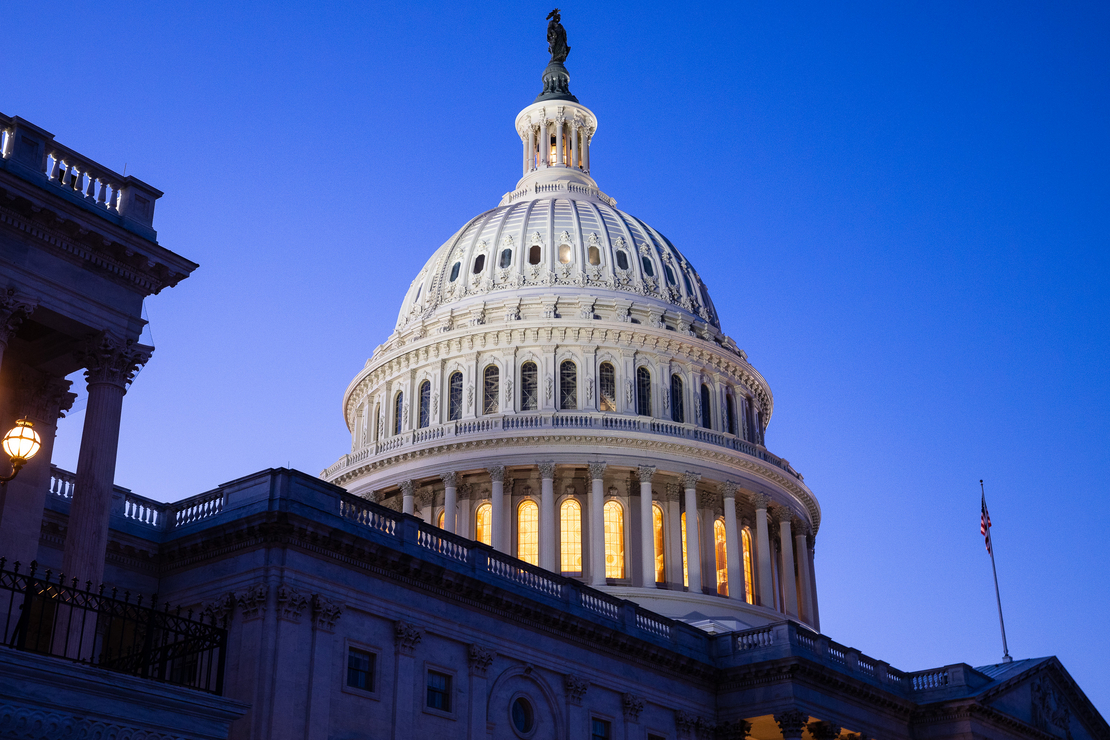 Even as its fate remains unclear, House Democrats’ ambitious effort to decarbonize the electric grid spurred a wave of attacks and counterattacks yesterday as it stirred debate over what it would mean for the myriad players in the nation’s power system.

Glick’s comments came two days after members of the Federal Energy Regulatory Commission tussled on Capitol Hill over the feasibility of the Clean Electricity Performance Program (CEPP), which would offer grants to power providers that increase clean energy generation by 4 percent each year and fine those that do not. The proposal in the embattled House reconciliation package is the centerpiece of President Biden’s efforts to tackle climate change and achieve a carbon-free electricity sector by 2035.

At FERC’s annual grid reliability conference, Glick defended the measure and pushed back against Republican Commissioner James Danly, who likened it during a congressional hearing this week to “dropping an H-bomb” into the energy market (Energywire, Sept. 29).

“We don’t have time to get into the absurdity of comparing a program aimed at addressing climate change to a weapon of mass destruction,” Glick said yesterday. “Climate change and extreme weather are obviously the big threat toward grid reliability, and we need to do something about it.”

Glick’s remarks came amid ongoing disputes about how the CEPP as currently envisioned would affect the utility industry and electricity mix.

For example, a collective of local power companies that the Tennessee Valley Authority sells electricity to warned in a letter to House and Senate leaders yesterday that the CEPP would leave them with the obligation to add new clean power, but withhold from TVA “the very tools it would make available to all other utilities in the nation in order to finance these resources.”

Doug Peters, the head of the Tennessee Valley Public Power Association (TVPPA), a utility trade group that buys electricity from TVA, raised concerns that the 150 local electric companies would be on the hook under the plan for meeting the 4 percent annual increase in clean energy, something they cannot do because most do not generate their own electricity.

“TVPPA and its members are not opposed to congressional action to unlock resources needed to manage a transition to a cleaner grid,” said Peters.

However, without changes, he said, 10 million customers in the Southeast “will be at a significant disadvantage to achieving the bill’s goals.”

TVA is the nation’s largest public power utility and sells electricity to more than 150 local power companies across a seven-state Southeastern region. The broad-brush approach to the CEPP currently exempts TVA and other wholesale providers from complying because it doesn’t directly deliver power to homes and businesses (Energywire, Sept. 17).

That puts the local electric companies at the mercy of TVA’s future electricity mix, including paying penalties if they don’t meet the annual clean energy growth targets. What’s more, it’s up to the shareholders, not customers, to pay those fees; however, when it comes to public power, those are one and the same.

To be clear, investor-owned utilities have shareholders to foot the bill, even if the cost of the investments that these electric companies make wind up in customer bills. Public power companies, including municipalities and cooperatives, don’t have that option.

“Local power companies have no choice but to recoup the costs of any penalties or compliance credits from anyone other than their end-use customers,” Peters wrote.

In the letter, TVPPA asks that local power companies and other electricity suppliers that do not have control over their generation mix — and do not have shareholders — be exempt from paying such penalties.

For its part, TVA is targeting a 70 percent reduction in CO2 emissions from 2005 levels by 2030 and an 80 percent reduction by 2035. Its board also approved a contract provision to let the local power companies generate up to 5 percent of its load behind the meter.

Behind-the-meter electricity is generation that directly powers a home or business. This could include distributed solar, small wind turbines, battery storage and gas-powered generators.

“TVA is focused on supporting progress in clean energy through the shared successes of our customers, stakeholders and communities,” the utility said in a previously emailed statement to E&E News. “While we do not engage in the legislative process, we look forward to continuing to partner with others to support a clean energy future for our Tennessee Valley region and the nation.”

“We believe the electric power industry and the regulatory frameworks in which they operate are well-prepared to implement the CEPP while maintaining the high levels of reliability that are critical for our human, societal and economic well-being,” the letter said.

Other electricity leaders also have spoken out in favor of the CEPP.

Ralph Izzo, the president and CEO of Public Service Enterprise Group (PSEG), said last week during a webinar that work in Congress around the CEPP was “wonderful news” and could help propel clean energy.

Energy Secretary Jennifer Granholm, meanwhile, in a podcast that aired yesterday called the clean electricity plan the “long pole in the tent” for President Biden’s efforts to tackle climate change.

“It is more than just renewables,” she said on CBS News’ “The Takeout” podcast. “It is also nuclear, making sure we have clean, dispatchable baseload power.”

What the program would mean for nuclear, however, is a source of disagreement.

The program would count nuclear as a clean fuel and a pro-nuclear group cited the proposed clean electricity program in an analysis this week, arguing that it could make it even more expensive to close the Diablo Canyon nuclear plant in California.

The Breakthrough Institute wrote that shuttering the state’s largest nuclear power facility, could cost between $500 million and $1.5 billion in penalties and potential federal payments.

But the Breakthrough Institute wrote that policymakers should consider that in addition to the costs of decommissioning the plant, PG&E would “very likely” pay a penalty for losing a major source of clean energy.

“Unfortunately, PG&E is planning to decommission the Diablo Canyon nuclear generating plant that is responsible for approximately half of their current clean energy generation in 2024 and 2025 (with one of the two generating units retiring in each year),” Breakthrough Institute analysts wrote. “This will very likely result in PG&E paying a penalty under the CEPP, though the magnitude of this penalty depends on the extent to which Diablo’s generation can be replaced by other clean generation in the year it retires.”

Analysts have suggested that the plan could boost nuclear power by increasing the demand for clean energy regardless of the source.

Nuclear “is being valued as clean energy the same as any other clean energy,” said Meghan Hammond, an associate with the Pillsbury Winthrop Shaw Pittman law firm.

She noted that utilities that already use nuclear power would be able to factor that into their certified clean electricity percentage, giving them a motivator to keep nuclear power running.

Analysts say it could boost future nuclear development as well by sending a message to the investment community.

Southern Co.’s Georgia Power subsidiary is the only electric utility in the nation currently building a nuclear plant.

The Plant Vogtle expansion project would see a CEPP grant for its clean energy build-out, according to an analysis from the Southern Alliance for Clean Energy.

The regulated electric company owns a 45.7 percent share of Vogtle’s twin, 1,100-megawatt nuclear reactors that are scheduled to start producing electricity in 2022 and 2023.

Southern has not commented publicly on the CEPP.

Jacopo Buongiorno, a professor of nuclear science and engineering at the Massachusetts Institute of Technology, said he expects the plan could provide “direct and essential help for the existing fleet” of nuclear reactors.

It could also provide a “boost in image, confidence for the wave of advanced reactor technology” that is expected to happen in the coming years, he said.

But he said that if they were given a green energy boost of $10 to $20 per megawatt-hour, they would “become very, very financially sustainable.”

If the boost is that much, “it could directly save many plants that otherwise would shut down because they’re not profitable,” he said.

Buongiorno said he is uncertain whether the CEPP would provide that, but that its aim is to boost green energy sources.

Other concerns have bubbled up from many facets of the electric utility industry over the CEPP.

One of the nation’s largest power providers, American Electric Power Co., said in a letter this month that the program would “adversely impact the reliability and resilience of the electric grid” (Climatewire, Sept. 15).

And competitive energy suppliers — particularly large renewable developers — are concerned that regulated, investor-owned utilities will opt to build all the clean energy projects themselves so they can recoup the cost of those capital investments plus earn a profit.

“It may not look exactly as it looks right now,” Granholm said. “But I believe, for their constituents, they want to see something significant happening.”

She dismissed worries that Biden’s presidency could be mortally wounded if the package doesn’t pass Congress.

“I do think that it’s very important to get his agenda through, but I also think that most of us have a memory as long as that of a gnat, this is year one of a four-year term,” she said, adding that it was nevertheless important to move quickly before the 2022 election. “You want to have something solid in that first two years of an administration.”

Still, the outlook for the clean electricity provision is cloudy. Manchin told reporters yesterday that natural gas has to count as part of a clean energy standard, potentially putting it at odds with the House version.

“I’m all for clean energy but I’m also for producing the amount of energy that we need to make sure that we have reliability,” Manchin said. “I’m concerned about that.”

While the House version of the CEPP does not bar the use of any electricity source, it defines clean electricity as generation with a carbon intensity of less than 0.1 metric ton of carbon dioxide equivalent per megawatt-hour — effectively ruling out natural gas on its own. Gas could still count as a clean power source under the House plan, but only with the adoption of technologies like carbon capture and storage.

Manchin, though, suggested the technology isn’t up to task: “We don’t have the tech because we haven’t really gotten to that point, and it’s so darn expensive that it makes it almost improbable to do.”

The coal state Democrat’s remarks came as POLITICO obtained a July memo in which Manchin told Senate Majority Leader Chuck Schumer (D-N.Y.) that he’d agree to a $1.5 trillion reconciliation bill — with several caveats, including that the Senate Energy and Natural Resources Committee he chairs would have sole “jurisdiction on any clean energy standard.”

Correction: An earlier version of this story misattributed quotes from a letter from grid reliability experts.