How do Exxon and State line up on human rights? 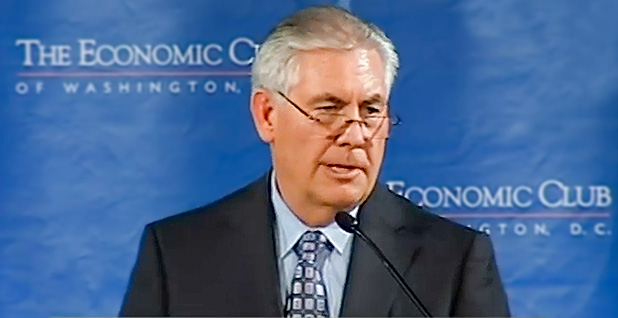 When President-elect Donald Trump announced the nomination of Exxon Mobil Corp. CEO Rex Tillerson to be his secretary of State, Tillerson was painted as a master dealmaker. What Trump’s team didn’t talk about is how well the choice at State matches up with the department’s role as the public face of the U.S. human rights agenda.

Exxon deals with dozens of countries and leaders around the world in political environments ranging from liberal democracies to corrupt autocracies. What does Tillerson’s Exxon suggest about the priorities of a Tillerson State Department?

"Exxon faces conflicts around the world, and many of those conflicts are grounded in human rights," said Carroll Muffett, president and CEO of the Center for International Environmental Law, a nonprofit whose mission includes the promotion of human rights.

Muffett pointed to charges that Exxon faces in Indonesia, where security forces at a sprawling Exxon gas project there allegedly tortured and killed villagers in the province of Aceh in the late 1990s. Exxon disputes the charges. A U.S. district court judge ruled last year that the plaintiffs in the case against Exxon could sue the company in the United States because of allegations that top company officials were aware of the abuses.

Exxon is also a target of an investigation in the Philippines, where multinational energy companies are charged with violating the human rights of local populations now affected by climate change, Muffett said.

The cases raise questions about whether Tillerson will take a strong position on Indonesian human rights abuses or come down hard on Philippine President Rodrigo Duterte about the execution of drug users, Muffett said.

"These are emblematic of the sorts of conflicts that Exxon has faced worldwide," he said. "If the U.S. State Department is led by someone who spent his career at a company that is accused of human rights abuses, then the strength of their voices will definitely be impacted by this."

‘If they commit, they will deliver’

Bennett Freeman was a deputy assistant secretary for democracy, human rights and labor at the end of the Clinton administration in 1999 and 2000 and since then has worked with a range of human rights nonprofit groups and in the socially responsible investment world.

Freeman described Exxon’s human rights record as "not as bad as it sounds," though far from good.

Freeman recounted how Exxon, around the time that it was merging with Mobil to form the company that exists today, refused to participate in a State Department-led process to establish the Voluntary Principles on Security and Human Rights. That framework lays out how oil, gas and mining companies should operate in conflict zones and how to structure arrangements with security and police forces in ways that minimize the risk of human rights violations.

Shell Oil Co., Chevron Corp. and other Exxon competitors at the time chose to participate in the process.

When Exxon reconsidered the program in 2002, Freeman said, it took what many people describe as a typical approach for Exxon: It launched a deep, methodical process to integrate the voluntary principles into the company’s business practices.

"The thing that’s important to know about Exxon is that the process is very important to them," Freeman said. "If they don’t want to do something, they won’t do it, but if they commit, they will deliver."

Exxon has been serious about environmental health and safety issues since the Exxon Valdez oil tanker spilled 11 million barrels of crude into Prince William Sound, Alaska, in 1989, Freeman noted. "That culture is both the company and Rex Tillerson," he said.

Still, Freeman said the company has not committed to important efforts to improve the oil and gas industry’s human rights record. One of those areas is transparency. Exxon has fought measures to make the voluntary principles agreement more accountable by requiring member companies to report publicly each year.

More broadly, Freeman pointed to the conflicts that inherently arise in an industry where resources are pursued wherever in the world they appear. Often, those resources are found in countries where corruption and human rights abuses are already a problem.

Indeed, there’s a political science hypothesis known as the "resource curse" that explains that countries naturally abundant in non-renewable resources tend to have less-democratic institutions and more limited economic growth, stemming from a disproportionate focus on resource extraction instead of on human development and institution-building.

"In order to get [business] deals, they’re dealing with countries with varying degrees of corrupt and oppressive governments" like those in the Middle East, Kazakhstan and Russia, Freeman said. "From that perspective, it’s easy to be critical of them."

For a concrete example of the issue, Freeman points to Equatorial Guinea, a small country on Africa’s west coast where oil was found in 1995, and that has since become a textbook case of the resource curse. Freeman chairs a small nonprofit organization called EG Justice that advocates for the rule of law and human rights in the country.

Freeman said Exxon "plays by the book" in Equatorial Guinea, observing the Foreign Corrupt Practices Act, a U.S. law that bans the payment of bribes to foreign officials. But the company is by far the largest revenue source for the government there, which is considered the most oppressive and corrupt regime in sub-Saharan Africa, he said.

"They’ve got the GDP of Italy, one of the wealthiest countries in the world, but 90 percent of the population lives on less than a dollar a day," Freeman said.

EG Justice points to the results of a Senate investigation published in 2004, before Tillerson became Exxon’s CEO, that found hundreds of millions of dollars had been paid by several oil companies, including Exxon, to Equatorial Guinea by way of a U.S.-based bank account. The money ended up funding the president’s family’s spending habits rather than reaching government coffers, the report concluded.

Tutu Alicante, EG Justice’s director, said last week that without Exxon’s support, the country’s ruling family would not have been able to maintain control. "Exxon definitely has enabled a government that once upon a time was very repressive but didn’t have the resources to keep itself in power," Alicante said, adding that, "For just about anyone who cares about transparency in [the] extractive industry, this is a devastating pick."

In an email, Exxon spokesman William Holbrook pointed to the company’s engagement with the voluntary principles process and its alignment with the U.N. Global Compact, which he said are "foundation policies" of the company despite a decision not to become a signatory to the agreement, which addresses ethics, human rights, labor standards, corruption and other issues.

"Respecting human rights in conjunction with our business activities consists of several core elements that include adhering to corporate policies and expectations, complying with applicable host country regulatory requirements and universally recognized principles, and engaging with external organizations," Holbrook said by email. "It also includes appropriate assessment and monitoring of labor and working conditions and people’s access to basic necessities. As we develop oil and gas resources, we also work to contribute to the economic and social development of the countries where we operate."

At the State Department, the commitment to human rights as a distinct policy area dates back at least to the Carter administration when the Bureau of Democracy, Human Rights and Labor was formed, according to Freeman, who said the level of attention to that facet of the organization has varied over time with the priorities of the president and the secretary.

"Some secretaries give more emphasis to human rights. Some give more explicit or implicit emphasis. Some care more, some care less," he said.

Whether Trump and his secretary of State put a prominent emphasis on human rights diplomacy or not, Freeman said, the mission has strong bipartisan support on Capitol Hill. "No secretary of State is going to eliminate, or try to eliminate, and I hope not cripple, the bureau," he said. "It’s a bureau whose mission and mandate should not vary from administration to administration, though the policies that guide it, to some extent, vary."

Asked about concerns that Tillerson’s appointment would detract from U.S. credibility, Freeman put the ball in his court. "I’d like to think that he will have a degree of self-awareness that that will be a serious perception and therefore a serious problem," Freeman said.

Reached last week, a State Department employee who works on human rights issues but didn’t want to be identified expressed "shock and disappointment" with the announcement of Tillerson’s selection, saying that among those who work on the issue, "it’s definitely a depressed atmosphere."

"It’s hard to think much beyond major challenges to doing my job," the person said. "Trump has talked about reinstituting waterboarding, which is torture. And part of my job is to tell other governments, or to strongly encourage other governments, to not torture people."

Muffett, who leads the Center for International Environmental Law, noted that the United States has a "long and complicated history" with human rights. It’s both a leader and a laggard among developed countries in signing onto international agreements.

"The American public has been trained to believe that we don’t need human rights because we have the Constitution," Muffett said.

"The truth is that the Constitution protects many human rights but not all of them, and not in the same way those rights are protected in other regions, particularly in Europe," he said.

Trump’s appointments so far reflect "profound disdain" and a "threat" to the agencies they will be in charge of, Muffett asserted. "I’d say the nomination of Rex Tillerson is not just emblematic of that pattern, but almost the culmination of it," he said.