How do you talk to Pruitt about climate change? 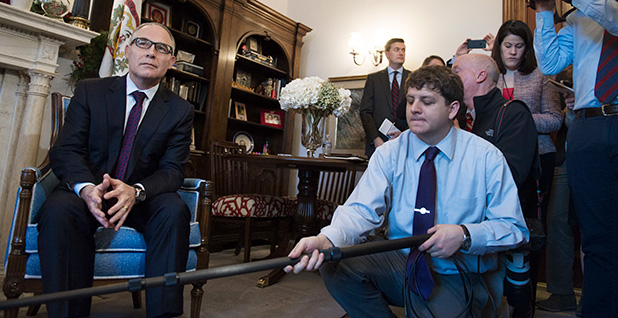 U.S. EPA boss Scott Pruitt is skilled at sticking to his talking points, particularly when it comes to climate change.

For journalists covering that issue, pushing Pruitt beyond his rhetoric has become more important as the EPA chief has become one of the Trump administration’s highest-profile officials casting doubt on mainstream climate science.

Over a year into his tenure at EPA, Pruitt has offered a rotating selection of statements on his views about climate change. Since his confirmation hearing, he has said the degree of human responsibility cannot be measured "with precision." At least once, he has suggested climate change may even be a good thing for humans. His message has shifted somewhat depending on his audience, but his public statements regularly question the extent to which carbon dioxide emissions are affecting the planet.

Given his reliance on the same statements, researchers who track climate change communication think the media ought to change their approach when questioning the administrator.

For one thing, reporters could focus more on challenging Pruitt’s comments, rather than pressing him to articulate his beliefs on climate change, said John Cook, a research assistant professor at the Center for Climate Change Communication at George Mason University who studies the spread of misinformation on climate change.

"What we’ve found is you can inoculate people against misinformation by explaining the techniques used to distort the facts," Cook said.

As an example, he pointed to Pruitt’s press conference last year after President Trump announced the U.S. plan to eventually withdraw from the Paris climate agreement.

Other researchers suggested different questions journalists and others could ask Pruitt to circumvent his prepared statements on climate change.

Reporters could instead focus on economics, shared values and principles of stewardship, said Max Boykoff, director of the Center for Science and Technology Policy Research at the University of Colorado, Boulder.

Recently, Pruitt has spoken publicly about his belief — inspired by his religious faith — that mankind should be stewards of the land.

"If you get confrontational, you get shut down and you don’t get to ask any more questions. So it is a very intricate dance, if you will. Part of the problem is it takes sustained engagement. It takes the opportunity to ask more than just one zinger," he said.

This mirrors the approach recently adopted by the Franciscan Action Network’s executive director, Patrick Carolan, who sat down with Pruitt for well over an hour a couple of months ago to talk about the intersection of faith and environmentalism (Climatewire, March 15).

Rather than challenging the administrator on science, reporters could ask Pruitt about climate risk management, specifically about what a climate insurance policy might look like, Dana Nuccitelli said in an email.

Nuccitelli is an environmental scientist who writes a London Guardian column, "Climate consensus — the 97%," and blogs for Skeptical Science, a website that challenges climate skeptics’ arguments. He noted that so far EPA has only reversed steps to create such climate insurance policies within the United States.

"Pruitt has suggested we don’t know Earth’s optimal temperature and that perhaps continuing global warming might be beneficial. These positions are contradicted by a vast body of climate impacts research, but the range of possible outcomes varies from bad to catastrophic," Nuccitelli said in an email. "While Pruitt doesn’t believe the outcome will be terribly bad or catastrophic those outcomes are nevertheless in the range of possible scenarios, based on the body of research."

Nuccitelli warned against trying to debate climate science, because individuals who question the widely accepted research behind its causes are basing their statements in ideology and tribalism.

"Rejection of science is just a red herring to avoid discussing policy solutions. As a scientist that is a bit frustrating, but sometimes I think we just need to look past science denial and find the root of opposition of climate policies," he said.

Cook also described Pruitt’s statements on climate change as echoing those of "run-of-the-mill denialists" on the internet. He and his colleagues found statements questioning mainstream climate science tended to fall into five main themes: Climate change isn’t real, it isn’t us, it’s not bad, there’s no hope, and general attacks on science and climate. These categories mirror the main ways those who favor climate action discuss the issue. Pruitt’s comments on climate have focused on each of these five themes over the past year, according to Cook.

"You see this exact same pattern of behavior amongst anonymous bloggers or anonymous commenters. It’s kind of striking that you have the head of the EPA regurgitating talking points you find on the comment threads on blogs," he said.

The public may soon have more tools for analyzing climate change arguments from Pruitt and others within the administration, thanks to Cook’s research.

He and his colleagues at George Mason are currently training a machine to recognize and flag misinformation on climate change. To do this, they are scraping what he described as "climate denialist" blog posts and conservative think tank posts. He is aiming to have it ready later this year.

"Eventually we’re hoping this can be used to also inoculate against misinformation," Cook said.

Several reporters who cover Pruitt closely backed up researchers’ concerns about how their colleagues were addressing climate change. At least two reporters noted that Pruitt tends to get the same questions about climate change but doesn’t face much follow-up during interviews. They asked to not publish their names to speak freely about their beats.

"[Pruitt] talks in sound bites, he makes a stump speech for every interview," one environmental reporter told E&E News. "If you have been following closely, then you are prepared to challenge him on those talking points. Even Michael Barbaro at "The Daily" [a New York Times podcast] is not prepared to challenge Pruitt. I generally feel that’s strategic on the part of EPA’s political team, that’s why he’s on Fox News so much."

The reporter noted that Barbaro specifically didn’t challenge Pruitt’s claims that the administrator had been tough on polluters, or follow up that much of the enforcement action EPA was now claiming credit for had been initiated under the Obama administration, something reporters who focus on EPA would have already known.

However, Bobby Magill, the president of the Society of Environmental Journalists, a professional organization for environmental reporters, praised the media’s efforts to press the administrator.

"From what I’ve seen, [reporters] take a lot of opportunities to be very confrontational to him. The problem is it doesn’t resonate very well," he said. "I think ultimately the best way for reporters to do their jobs is to report the erroneous information he presents and document that and report the facts."

Of course, getting better answers on climate change depends on Pruitt giving access to reporters, something his press shop allows sparingly.

Emails obtained by E&E News showed agency staff had prevented media access to a roundtable discussion during Pruitt’s "state action tour" (Greenwire, Jan. 25). In another instance, EPA spokesman Jahan Wilcox shot down a proposal for a local Alaska radio station, KDLG, to interview Pruitt or another EPA official about the Pebble mine. "NO WAY, it’s a liberal station in Alaska," Wilcox wrote in an email (Greenwire, Feb. 28).

"The EPA press team has been so antagonistic of environmental reporters or refusing to release information. They aren’t getting the access they need, let alone getting interviews with Pruitt," said Lisa Hymas, director of the director of the climate and energy program at Media Matters for America, a progressive media watchdog group.

A recent analysis by Media Matters found that in his first year as administrator, Pruitt appeared 16 times on Fox News, compared with twice on ABC News and CNN, and once on MSNBC, CBS News and NBC News. Outside of television, Pruitt has strongly favored conservative talk radio or Christian media. He sat down for interviews with radio show hosts who challenge mainstream climate science, such as Brian Kilmeade and Michael Savage.

An example of one of these interviews was Pruitt’s appearance on Fox News in September 2017. As "Fox & Friends" tracked the impending landfall of Hurricane Maria, the hosts invited EPA to talk about whether climate change was a factor in the storm.

"With climate we know certain things, we know the climate is always changing, we know humans contribute to it in some way. To what degree, to measure that with precision is very difficult, but what we don’t know is are we in a position where it’s an existential threat. Is it unsustainable with respect to what we see presently?" Pruitt said.

The administrator went on to talk about potentially hosting a public debate about climate science and noted that the United States had already made great strides in cutting emissions through technological advances.

"You would think that people would be happy with that, but many in Hollywood and many on the left aren’t," host Kilmeade said in response to Pruitt’s remarks.

Pruitt also does speak with major national publications. In addition to his interview with "The Daily" podcast, Pruitt has also sat down with Reuters, USA Today, The Washington Post, Time and other outlets. Some of those interviews have been conducted by general political reporters, rather than the environmental reporters who follow Pruitt closely, said Hymas.

Hymas noted that TV networks focused on whether Pruitt believed in climate change but put much less emphasis on specific policies like repealing the Obama-era Clean Power Plan.

"I think overall the focus should be more on what he is doing, more than on what he believes," said Hymas. "I’d love it if bigger outlets [that] were thinking of [interviewing Pruitt] say, ‘Let’s have our climate reporter do it.’"

Cook of George Mason has his own questions he’d like the EPA administrator to answer.

"If I personally got to ask Pruitt a question, it would be, ‘Why if he believes there’s so much uncertainty over human’s role in causing global warming, then why is he so certain that humans are not the primary contributor?’ This is a hallmark of science denial: emphasis on uncertainty while being so certain in their own position," he said.