How does Texas keep the lights on? It’s complicated 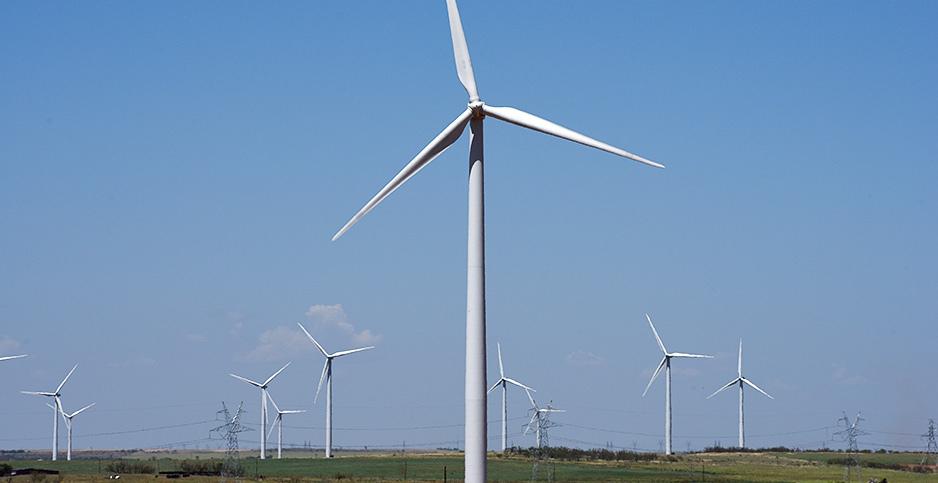 The Texas grid has posed a concerning riddle: How does a state with the nation’s thinnest margin of backup electricity and the largest installed wind capacity manage to keep power humming in a heat wave?

The question popped up last week when temperatures blasted past 100 degrees and air conditioners pushed the electric supply to its limits.

Texas’ policies worked again, bringing on remaining reserves and cutting demand to get past peak power demand surges, although spot prices for electricity soared to a cap of $9,000 per megawatt-hour (Energywire, Aug. 16).

The idea that there’s something strange about Texas’ main grid was broached last month by Jim Robb, chief executive of the North American Electric Reliability Corp. (NERC), the grid’s security overseer. Robb told a regulatory conference that based on the state’s low percentage of power reserves, "there’s no way in hell they can keep the lights on." Then he added, "And yet they do," concluding "there’s something in the soup" (Energywire, July 8).

The Electric Reliability Council of Texas, the state’s main grid operator, projected in May that its summer planning reserve margin would be only 8.6% this summer. ERCOT has discussed a 13.75% target in the past, but the preferred level has been a point of debate in recent years.

The answer, of course, isn’t something on a menu, but rather the sprawling state’s unique status as top producer of renewable and fossil fuels, with a huge contingent of energy-hungry refiners and petrochemical plants and a one-of-a-kind system for managing emergency shortages, Texas grid experts say.

"This summer was a good test with a really low reserve margin," said Pat Wood III, a Houston-area resident, past Texas utility regulator and former chairman of the Federal Energy Regulatory Commission. He said the industry and ERCOT have performed very well this summer — and he trusts ERCOT’s projections that reserve margins should widen the next two summers.

Yet worries remain about Texas and whether the lights will stay on during peak times. Ed Hirs, a University of Houston energy economist, referenced a busy Houston street to make his point.

"Just because a blindfolded drunk can cross Westheimer Road unharmed in the middle of traffic once doesn’t mean he can do it again," Hirs said.

ERCOT was prepared last week for the heat wave’s impact, according to spokeswoman Leslie Sopko.

"The wholesale market is working as designed, encouraging generators to make themselves available when operating reserves are low," Sopko said.

Unlike some other U.S. electricity markets, ERCOT doesn’t create a separate bucket of "capacity" payments to incentivize power generators to keep some generation offline as reserves to deal with unexpected shortages.

Instead, it pays producers for power as needed but allows spot prices to escalate dramatically during shortages. That’s a different version of incentivizing backup supply and prompting some customers to temporarily cut back their demand when prices take off.

"There has to be a reason for power plants to stay in the market" with backup supplies, said Joshua Rhodes, a research associate at the University of Texas, Austin, and a senior energy analyst at Vibrant Clean Energy, a grid planning consultancy.

Texas’ wholesale electricity prices should average $30 a megawatt-hour this year, the federal Energy Information Administration says. But in high-stress situations like last week’s heat wave, an ERCOT pricing formula called the Operating Reserve Demand Curve pumps up spot prices with a premium that increases as reserves shrink, up to a breathtaking $9,000 MWh.

Higher prices reflect the rising value of power when there’s a higher possibility of rotating outages. Buyers short on supply have to pay a higher wholesale power price when it’s in place.

That’s a powerful inducement for them to reduce power demand by activating conservation programs, such as paying industry to temporarily shut down some operations while the peak prices are in place, Rhodes noted.

"If you go from Houston to Corpus Christi, there’s a lot of petrochemical and refining production," Rhodes said. "For a high enough price, they’ll stop production."

Refiners or plants that have their own generating units may sell power back into the grid, as well, he added. Texas industry delivers a huge volume of carbon emissions, but its industrial base helps it through shortages.

"Whenever the grid is peaking, that’s not only being attacked on the generation side. Demand is trying to reduce itself, too," Rhodes said. "I think that is a beautiful market."

Although the strategy worked last week, Rhodes doesn’t see a consensus around Texas that the approach is the best one.

"Some people don’t like the risk" of higher power prices or the sharp price swings that follow shortages, he said. "They want more certainty."

Texas has the highest amount of wind energy output of any state, the result originally of an unusual political alliance between ranchers and farmers in the state’s sparsely settled western counties who wanted turbine farm royalties and city residents who wanted wind’s clean energy.

The state greenlighted a program that has spent nearly $7 billion to construct some 3,600 miles of new transmission lines to deliver wind power eastward to cities, a leap that other states struggle to make because of residents’ opposition.

Texas is able to draw on the nation’s largest production of natural gas to power-peaking units that are typically called on to meet afternoon surges in electricity demand.

There’s a lot of ability to move gas-fueled generation up and down as needed, Rhodes said.

In a heat emergency, wind power from West Texas turbines can tail off at the worst possible time, in the afternoon just as power demand reaches a daily peak. But that’s also when wind turbines along the Texas Gulf Coast can pick up, Cohan noted.

"In the summer afternoons between 2 and 6 p.m., when the supply is tightest in Texas and the air conditioning is really cranking, that’s when we most often see strong wind conditions in along the coast," Cohan said. "Looking at wind maps on those days, it really helped us dodge a few bullets to have the sea breezes come in when Texas needed it the most."

While proponents of holding to more coal generation in Texas say the hot weather stress makes their case, Cohan draws the opposite lesson.

Texas could add invaluable insurance against shortages by building more solar power in western counties, he said. Then, when demand is hitting its late afternoon highs in Dallas, the sun would still be at its peak an hour earlier in the west, he added.

At ERCOT, the summer planning reserve margin is estimated to climb to 15.2% in 2021, then fall below 8% in 2024. ERCOT also noted that much of the new generation projected to come online to meet growth in electricity demand is coming from wind and solar, pressuring the state to ensure it can deal with the intermittent output of its renewable energy supplies.

Hirs with the University of Houston argued in a recent op-ed that "Texas should leave its Soviet-style ERCOT market in the dustbin of history" and switch to a traditional capacity market, or it should return to a fully regulated market that guarantees a rate of return to all power companies. Hirs told E&E News the ERCOT market is poorly designed.

"Eventually it will reach a situation where we have blackouts," he said, and high costs to "step in during these disasters to ensure reliability."

ERCOT declared emergency alerts twice last week, but it didn’t have to resort to rotating outages.

Yesterday, Texas power provider NRG Energy Inc. told E&E News the grid held up well given the stress it faced for a number of days. The company also said it asked customers to conserve at times last week.

Elizabeth Killinger, an NRG executive vice president, said customers on the company’s fixed-price plans don’t have to worry about the price of power rising during a given month, though bills could be higher because of more power consumption.

"Our commercial expertise makes it better for our customers," Killinger said, adding that NRG wants to "power and protect" customers.

Griddy Energy LLC is one power company that’s in the spotlight. It allows customers in ERCOT to try to save money by riding the ups and downs of the wholesale market for a monthly fee. This week, the Houston Chronicle and other news outlets told of customers stung by high prices.

The Texas Public Utility Commission said it has received more than 200 complaints about Griddy this month. The company said it’s giving back its August membership fee, but it remains to be seen what the fallout will be for Griddy from consumers and regulators.

Griddy maintains it’s still saving members money — if they’ve been with the company for all of 2019 — when compared with EIA’s average power price for Texas.

Wood, the former regulator, said he remains a Griddy customer. It provides the electric freedom he’s promoted for years. He said customers who go that route should at least have a smart thermostat to help adjust demand when needed.

"The real silver bullet for us as a country and as a world is to have real-time price information," Wood said, "so people know not just what the power costs over an average of a year, but what it’s costing right then."