How ‘draining the swamp’ backfired spectacularly in Va. 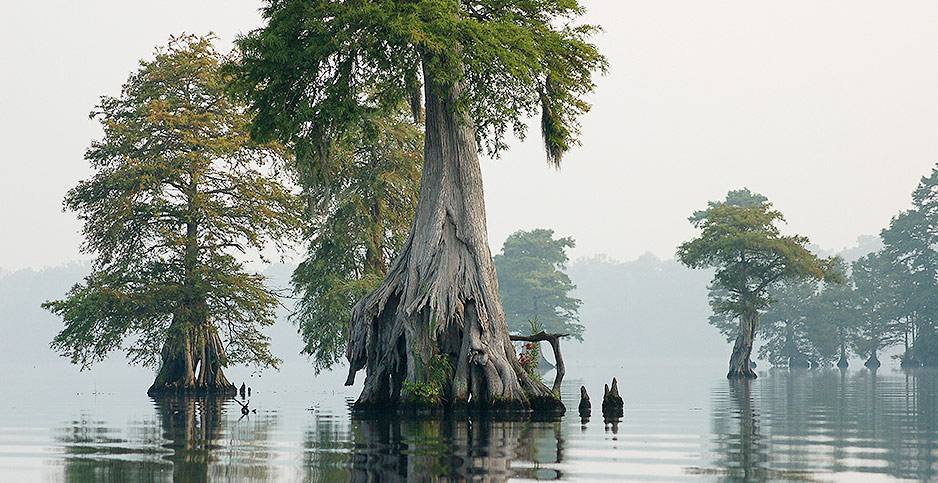 The swamp, a 112,000-acre tangle of lush vegetation and dark soil with a name out of a fairy tale and a history that dates back to George Washington, has seen better times. After centuries of being drained and logged, the swamp, straddling the Virginia-North Carolina border, has transformed from a moist wetland to a dry mass of peaty soil that’s constantly emitting carbon and frequently sparking wildfires.

But Lowie, the manager of the Great Dismal Swamp National Wildlife Refuge, thinks he’s figured out a way to bring it back to normal: by controlling its water flow.

Lowie’s solution is simple. It hinges on a network of aluminum dams — what Lowie calls water control structures — fitted into the ditches that crisscross the swamp and drain out its water. By placing them in the right spots and operating them in the right way, the managers of the refuge can control how water flows under and through the swamp, keeping the soil wet and preventing it from spitting out carbon on a daily basis.

The water control structures comprise metal frames and a series of bars that can be dropped to prevent water from passing through or raised to allow more to flow. The entire project, funded with a $3 million grant from the Department of the Interior provided under a 2013 act that funded Superstorm Sandy relief work, includes 14 of these structures. Twelve have already been installed across the ditches of the northeastern part of the swamp. The last two will be completed this summer, and when it’s done, said Lowie, water can be routed through the swamp to reduce the risk of wildfire and carbon release.

The ditch, a 26-mile-long canal that runs from a lake tucked inside the swamp, was initially constructed as a source of water to the nearby city of Portsmouth, Va. Now, it’s a strip of black sludge and water — dark because it’s been steeped in peaty soil for so long — and clogged with leaves and some fallen branches. When it rains over the swamp, the canal fills up quickly but then drains water into a larger canal, from which it flows out of the swampland.

"We can put these boards in and stage the water up as high or low as we want," explained Byrd. "We can control where the water’s going, both to wet the land again and to prevent floods. It allows the refuge to more actively and effectively manage the water levels to restore the wetlands."

Scientists aren’t sure exactly how much carbon the swamp contains. Ken Krauss, an ecologist with the U.S. Geological Survey, is part of a team trying to figure it out. He said all wetland ecosystems suck in carbon dioxide during photosynthesis and then convert it to carbon below the ground — sort of like a sponge that’s pulling in greenhouse gases from the air.

"On a small scale, that doesn’t matter too much, but when you multiple that across the world, wetlands are a significant sink for carbon dioxide," he added.

The Great Dismal Swamp was first drained in the 1700s by a company set up by George Washington, with the intention of converting it into agricultural land. It dug a network of ditches into the soil, drawing away the water and changing the hydrology of the swamp completely. But when the company found that the land still wasn’t suitable for agriculture, logging companies moved in and began to profit off the trees in the wetland.

The new water management system could help prevent that by offering refuge managers something they didn’t have before: control.

"Essentially, what we’d be doing is increasing the residence time of the water," said Lowie. "That means that if I drop an orange in a ditch up here, it’ll take longer to get down here. Right now, the ditches are all funnels, but if we can move the water where we want, we can let the wetland be a wetland."

"What releases the carbon is the chronic decomposition of the peat, as well as fire. This can reduce that risk, so you don’t have that acute, immediate release of carbon," said Lowie.

Lowie and Byrd have worked with a hydrologist to identify a sort of baseline level to keep the water at — one that will keep the land hydrated but prevent flooding. Once the last structure is in, they plan to start feeding and stopping water in the canals of the swamp to keep it at that approximate height. It’s a conservative estimate, but Lowie is wary of filling the ground with water after centuries of remaining dry.

"If you permanently flood a wetland, you open it up to greater methane emissions," he explained. "Methane is roughly 25 times more potent than carbon dioxide in terms of its ability to warm the environment. What you don’t want to do is manage the swamp in a way that takes up a lot of the carbon in the soil, but in the process emits a lot of methane."

The system should be up and running this summer, the refuge managers say, who are planning to unveil it in the second week of May. Once that’s done, they can start monitoring how the control structures are working. To do so, they’ve set up a network of surface water gauges and groundwater wells that track the level of water both above and below the ground and have received funding to continue the monitoring for the next five years.

"This is both for today and for the future," he said. "Today, it’s about reducing the impacts of fires and flooding. For the future, it’s about doing something good for the habitat, rewetting the peat and allowing the swamp to be a swamp."