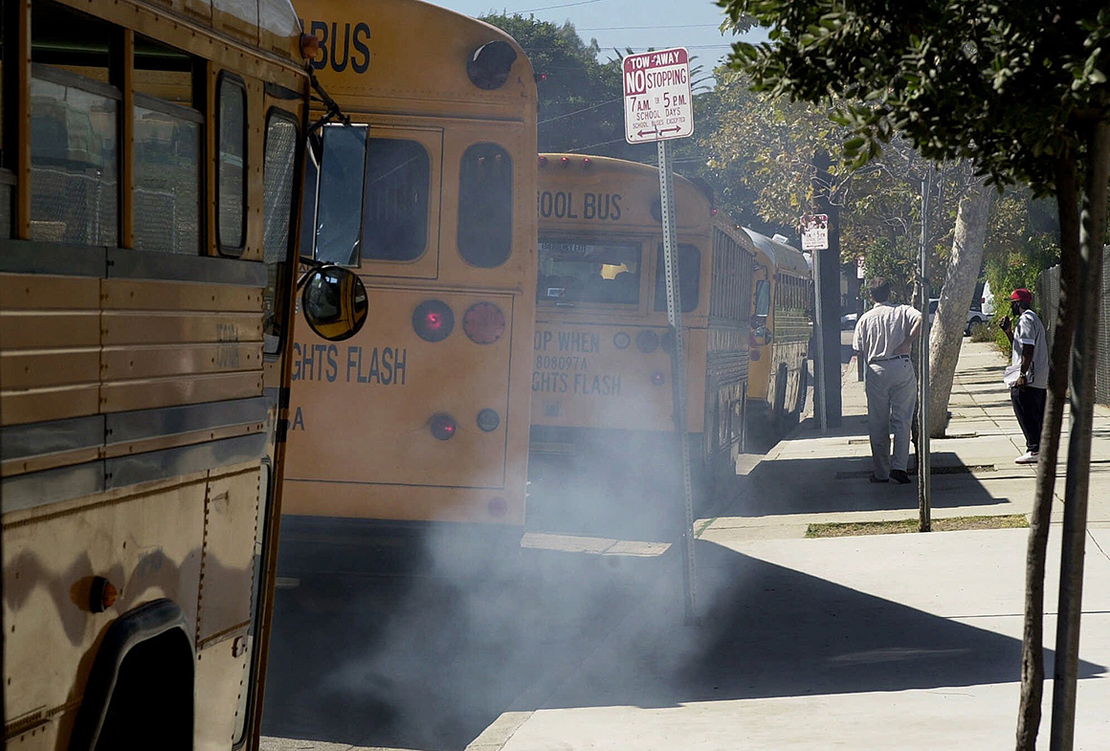 High school senior Anika Gupta has always ridden the bus to school, but a trip she took last month in northern Virginia was different. Not only was EPA Administrator Michael Regan along for the ride, but the bus was electric.

Regan spoke with Gupta, 17, and a few other students about his agency’s new program to electrify school buses across the country.

“It was a great ride,” Gupta said. Better than the diesel-powered vehicles she’s used to, where “the bus smell is very strong, especially after school when all the buses are parked in front of the school and everyone goes and finds their bus and it just smells like gas.”

That odor could be harming Gupta and her fellow students. Diesel exhaust has been classified as a human carcinogen, and it can lead to and exacerbate respiratory conditions. Those health conditions are exactly what EPA’s new Clean School Bus program aims to address.

“Transitioning to a clean transportation future means cleaner air and less pollution,” Regan said during the event. “It means healthier kids and a greater focus and productivity.”

Transportation is the single-largest source of greenhouse gas emission in the United States. And while diesel-powered vehicles are a small fraction of the country’s fleet, they spew the vast majority of planet-warming emissions and harmful air pollution, such as nitrogen oxide and particulate matter.

In an effort to protect children and the planet from harmful pollutants, the bipartisan infrastructure package enacted last November included up to $5 billion for the Clean School Bus program.

The health benefits could be exponential.

Of the roughly 480,000 school buses across the country, less than 1 percent are electric, and 95 percent run on diesel fuel, whose exhaust includes very fine particles of carbon and a toxic mixture of other gases, including benzene, which is known to cause cancer.

Other components of the exhaust can damage genetic information in cells, and inflame and irritate airways, leading to asthma and difficult breathing.

But it’s not just those living and walking along bus routes that have to worry about the pollution. A slew of studies conducted 20 years ago found that the exhaust is actually far worse inside the bus, meaning the 25 million children who ride the bus to school each day and their bus drivers are breathing in fumes at 10 times the rate compared to outside the bus.

And diesel exhaust exposures can be huge when considered over a child’s entire school career.

A child who rides the bus a half-hour to school and another half-hour back each day would be exposed to diesel exhaust for 180 hours a year. Over 12 years of schooling, that child would experience the equivalent of 90 full, 24-hour days of diesel exhaust exposure.

One study, from Yale University, found fine particulate matter was often five to 10 times higher inside school buses than outside.

Another study, conducted by the Natural Resources Defense Council in coordination with researchers at the University of California, San Francisco, measured diesel exhaust levels on buses and determined they would likely result in an additional 23 to 46 cancer cases per million children exposed.

Gina Solomon, now a principal investigator at the Public Health Institute, helped lead that study. She remembers being inspired to study fumes inside buses by a mother who came up to her following a talk Solomon gave about the dangers of diesel exhaust.

“She told me she had accompanied her child on a field trip in a bus and that it had smelled strongly of diesel and made her sick to her stomach,” Solomon recalled. “And that really struck me because if you can smell it, it is very likely at a level that is harmful.”

The NRDC-UCSF team decided to investigate. They rented four school buses and had them drive on real bus routes in Los Angeles. A sedan with monitoring equipment drove in front of the buses, and the buses themselves were also “tricked out.”

It was the first time Solomon had ridden a school bus since she was a kid, and what she found was surprising. Consistently, whether the bus was driving or stuck in traffic, or going up hill or downhill, pollution was worse inside the bus. Closing the windows only made the pollution worse, leading researchers to conclude that the diesel fumes were coming up into the bus through the floor.

“We were surprised at just how bad it was,” she said.

Now, 20 years later, Solomon said she is happy the Biden administration is helping to get kids out of diesel buses and into electric ones.

“Kids are the most vulnerable,” she said. “Diesel exhaust is strongly associated with asthma risk, and it causes inflammation in the airways and the blood vessels. None of these are things we want to have happen to kids on their way to school.”

‘A small fraction of what’s needed’

While the $5 billion in electric bus funding is historic, it is significantly less than what President Joe Biden initially sought. And without a sizable and strategic infusion of cash, advocates worry zero-emission school buses — which currently cost as much as three times more than gasoline-powered ones — could be distributed unevenly, potentially leaving behind low-income families and students of color who already bear the brunt of environmental pollution.

“The school districts that have less resources in lower-income communities are often the places where air quality is the most problematic,” said Matt Casale, director of environment campaigns for the U.S. Public Interest Research Group. “So we want to figure out ways to make sure that all of these school districts can take advantage of the money.”

Under the new program, electric school buses will receive $2.5 billion, enough for approximately 6,000 to 11,000 zero-emission buses. Another $2.5 billion is set aside for zero- or low-emissions buses. Biden’s original proposal aimed to electrify 96,000 school buses, or about 20 percent of the U.S. fleet.

While EPA is still crafting program guidance, which will determine exactly how the $5 billion is spent, the agency has said it plans to roll out a rebate program by the end of this month. That will allow school districts that have already purchased electric buses to receive some federal support.

“And that has some equity implications, because there are a lot of districts that just aren’t able to put this money down upfront and then apply for rebates,” Rauch said.

“The rebate program is designed to be a straightforward process for applicants with a short application form to complete, compared to a multi-page grant proposal, and we expect interest in the program from these priority groups,” Carroll said in an email.

The agency will also be utilizing grants and contracts to “ensure resources reach the communities most in need.”

While one electric bus can cost as much as $400,000, compared to $100,000 for a diesel-powered one, costs are beginning to come down. Battery technology has advanced fairly rapidly in the last few years, and school districts are increasingly placing large orders for electric buses, which has a ripple effect on production costs. A large injection of federal funds could further shift the market.

“And then, over time, the cost comes and you don’t need the same level of federal grants because it’s just worked into normal procurement,” Casale said. “So $5 billion from the federal government is not insignificant.”

Even without federal support, school districts are ramping up electric bus procurement. In the last six months, the number of committed electric school buses increased over 50 percent to a total of more than 1,800, according to WRI. Thirty-six states have procured or announced plans to procure electric school buses, with California, Maryland and Florida leading the way.

And most recently, Montana announced it will use EPA funding from the American Rescue Plan for electric school buses, which will bring the total count to 37 states.

“In Montana, kids are spending, especially if they’re student athletes, sometimes five hours on a bus,” Michelle Uberuaga, who helped launch the Moms Clean Air Force chapter in Montana, said during a recent webinar. “The opportunity is huge for rural school districts when we make this transition, and the savings can actually be quite large.”

There’s no research to know exactly how immediately kids riding diesel school buses would see health benefits once they are placed in electric vehicles instead, according to Solomon. “I would love to do that study,” she added. But she said she thinks a “fairly rapid” improvement might occur, especially in children already suffering from respiratory conditions like asthma.

“It would be really interesting to see if their symptoms improve and they are less likely to need to use their inhalers,” she said. “It’s certainly something I might expect to see.”

While it may be too late for Gupta to personally benefit from an electric school bus, she said she thinks the EPA program is a step in the right direction.

“It’s very gratifying to see that they are taking this seriously, but it’s not like every school is going to get [an electric bus], so I hope they’re able to expand it in the future,” she said.

For her part, Gupta has applied to college and is planning to study environmental science.

“I am going to try to do my best to help the planet, but there’s only so much I can do,” she said. “So it’s kind of stressful.”