How EPA methane rule hits energy, from pipelines to politics 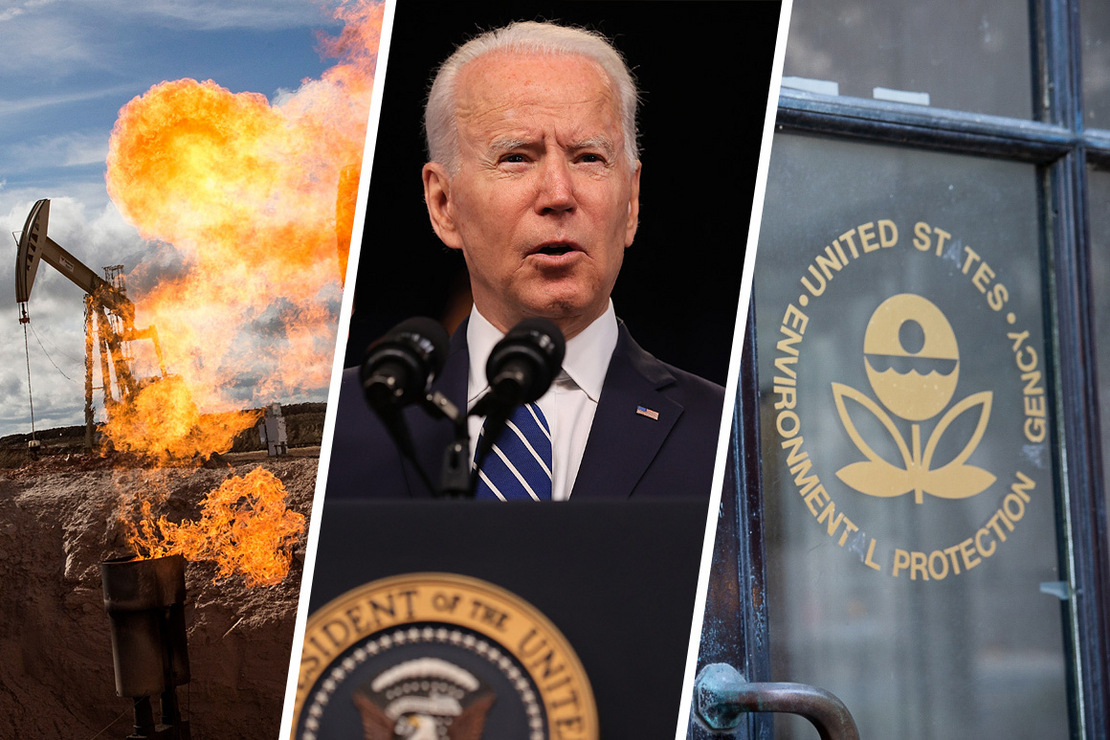 The Biden administration’s plan to reduce methane emissions announced yesterday may spark state clashes even as it was called "extremely costly" and drew criticism for allegedly not doing enough to cut oil and gas pollution.

The heart of the proposal is an updated EPA regulation on methane from the oil industry (Greenwire, Nov. 2). While it would cover a broader range of sources than current rules — including an expansion to include existing wells along with new ones — the proposal wouldn’t crack down on most flaring, the process of burning natural gas rather than piping it to market. It also won’t apply to many low-producing wells.

A separate plan teased yesterday by the Interior Department, to be introduced later, would crack down on flaring and venting — the release of gas directly to the atmosphere — from operations on federal land. A Transportation Department proposal also would address emissions from certain pipelines that have been linked to deadly explosions.

The EPA plan would allow new types of technology for detecting methane leaks, potentially boosting a budding new industry but also raising questions about the effectiveness of the rules, according to analysts (Energywire, Oct. 25).

Some sections of the industry, along with some oil-producing states, said they were unhappy with the plan. Environmentalists, too, are gearing up for a second bite at the apple as EPA finalizes the rule. The agency is gathering comment on yesterday’s proposal and said it could introduce a supplemental rule next year to reduce emissions further.

Green groups said they will use that to press for a crackdown on gas flaring and requirements to rein in emissions from older wells.

"We recognize that more can and will need to be done," said Rosalie Winn, a senior attorney at the Environmental Defense Fund who monitors methane from the U.S. oil and gas industry.

Methane, the main ingredient in natural gas, is responsible for about a fourth of the increase in average global temperatures since preindustrial times, according to climate scientists. It’s a far more potent heat-trapping gas than carbon dioxide, although it doesn’t last as long in the atmosphere.

In the United States, the oil and gas industry is responsible for about a third of methane emissions. The Biden administration and climate activists have seized on regulating methane as a powerful way to help control global warming in the short term.

EPA’s proposal seeks to capture gas that would otherwise escape from wells and pipelines, strengthening Obama-era standards by adding new requirements and extending them to existing wells. It would also cover oil wells that also produce gas, which were not covered by the Obama rules.

It would require companies to inspect their equipment for leaks more frequently and would force them to stop using pneumatic devices that release gas to relieve pressure at wellheads.

Oil and gas well sites emitting more than 3 tons a year of methane would have to inspect the wells quarterly and repair any leaks within two months. EPA says that covers wells that account for about 86 percent of emissions.

For existing sources, states would have to submit compliance plans meeting standards for reducing emissions. There would be "presumptive standards" states could adopt for easy EPA approval. But states could also set their own requirements as long as they reduce methane sufficiently.

The agency estimates that the proposed rules would eliminate 41 million tons of methane emissions from 2023 to 2035, the equivalent of 920 million metric tons of carbon dioxide.

EPA also said it will issue the supplemental proposal in 2022 and finalize its regulations by the end of next year.

Some industry leaders thanked EPA for taking its concerns into account on flaring and small, low-producing operations, often called "stripper wells." Several groups have asked EPA to wait for the results of an Energy Department study on small wells’ emissions before regulating them.

"The agency has tried to be responsive to our concerns for improved cost-effective monitoring technology and recognizing the importance of addressing small business challenges," said Barry Russell, president and CEO of the Independent Petroleum Association of America, which represents independent producers.

And small producers in the West, which would be affected by the flaring ban on public land, took a harsher stance than the rest of the industry. Kathleen Sgamma, president of the Western Energy Alliance, said Biden is clamping down on production at the same time he’s asking OPEC nations to pump more oil.

But Robert Kleinberg, a senior researcher at the Center on Global Energy Policy at Columbia University’s School of International and Public Affairs, said expanding the type of technology used in detecting methane could have a far-reaching effect.

The current EPA rules allow a single type of camera, which uses infrared photography to spot emissions that aren’t normally visible. But testing with the first-generation cameras tends to be slow, since it requires workers to drive from site to site, and EPA’s own data show that leak detection with infrared cameras has only resulted in negligible reductions, Kleinberg said.

Several companies have developed aerial detection systems using laser-based scanners and other new ideas. Those systems can scan a far broader area much more quickly and at a lower cost — a crucial consideration for companies that operate older, existing wells. The proposal would encourage the new systems by allowing equipment that looks for larger leaks, on a more frequent basis.

“To have a guy with an optical gas imager going around to a million existing oil and gas wells would be burdensome,” Kleinberg said.

“To be able to fly over them, at much lower expense, looking for just the big stuff — that’s the way to go.”

The EPA proposal’s lack of a flaring standard would leave a patchwork of a state rules in place, opening the door to legal challenges.

Some oil-producing states, such as Colorado and New Mexico, have already proposed their own methane restrictions. Texas and North Dakota have looser rules on flaring and on emissions in general. The two oil-patch states filed individual suits challenging the Obama administration’s methane rules, and a coalition of other states also sued to block the old rules (E&E News PM, Aug. 2, 2016).

In an interview with an environmental group Monday on the sidelines of the climate conference in Glasgow, Democratic New Mexico Gov. Michelle Lujan Grisham said the states’ efforts should show the way on methane regulation.

"There’s some incredible things happening in the United States, and the federal government should harness that effort and make sure that they set the toughest, highest standards," Lujan Grisham said to the Environmental Defense Fund.

But the Republican head of another state, Gov. Doug Burgum of North Dakota, yesterday blasted the Biden proposal as costly and counterproductive.

"The way to address methane emissions is through innovation, not redundant and burdensome regulations that will only drive energy production overseas," Burgum said in a statement.

The Interior Department’s plan on flaring and venting would affect wells across the 710 million acres of the onshore federal mineral estate that it manages, from the Mountain West to Alaska. Those lands produced 7.6 percent of the nation’s oil supply and 9.1 percent of the country’s natural gas supply in 2020, according to a recent report from the agency.

The agency will release a proposed rule in the coming months, according to Interior communications director Melissa Schwartz.

Experts anticipate a narrowed approach from Obama-era rules that sparked litigation, which may ease the thorniest legal conflicts that had emerged over the extent of the Bureau of Land Management’s authority to regulate emissions.

BLM’s 2016 Methane and Waste Prevention Rule was released at the tail end of the Obama administration and represented the first comprehensive national regulation to try and curb practices like flaring in the federal oil patch.

The rule had many provisions like those in the EPA proposals released yesterday, such as requiring operators to use infrared technology to monitor and seal leaks from infrastructure and perform on-the-ground checks of pipelines.

After years of back-and-forth, a court last year upheld a state- and industry-led effort to overturn most of the provisions in the Obama plan. Parties have yet to file briefs in an appeal of that court decision.

An appeal of a separate court decision in California is on hold until the end of the year. It had delivered a win to environmentalists by striking the Trump administration’s attempt to weaken the BLM methane regulations.

As Interior tries again, the BLM and EPA rules could complement each other, said Jon Goldstein, senior director of regulatory and legislative affairs at the Environmental Defense Fund.

The EPA proposal announced yesterday, for example, doesn’t address routine flaring, which has been largely banned in states like Colorado and New Mexico, he said.

“That is definitely an opportunity for BLM to step up,” he said. “Flaring is clearly a large source of waste. It is just unconscionable that we’re burning off this resource to no one’s benefit.”

The lines have been linked to several deadly explosions (Energywire, Nov. 2).

The safety regulations would help reduce emissions, the proposal said, and the expanded reporting would help determine if more safety measures are needed in the future.

The newly regulated lines, rural gathering lines 8 inches in diameter or larger, would have to follow most of the rules that currently cover regulated gathering lines in more densely populated areas. Those include design and construction standards, markers and leak surveys.

That aligns with a 2019 recommendation by a federal advisory board that has been opposed by the industry’s largest trade group, the American Petroleum Institute.