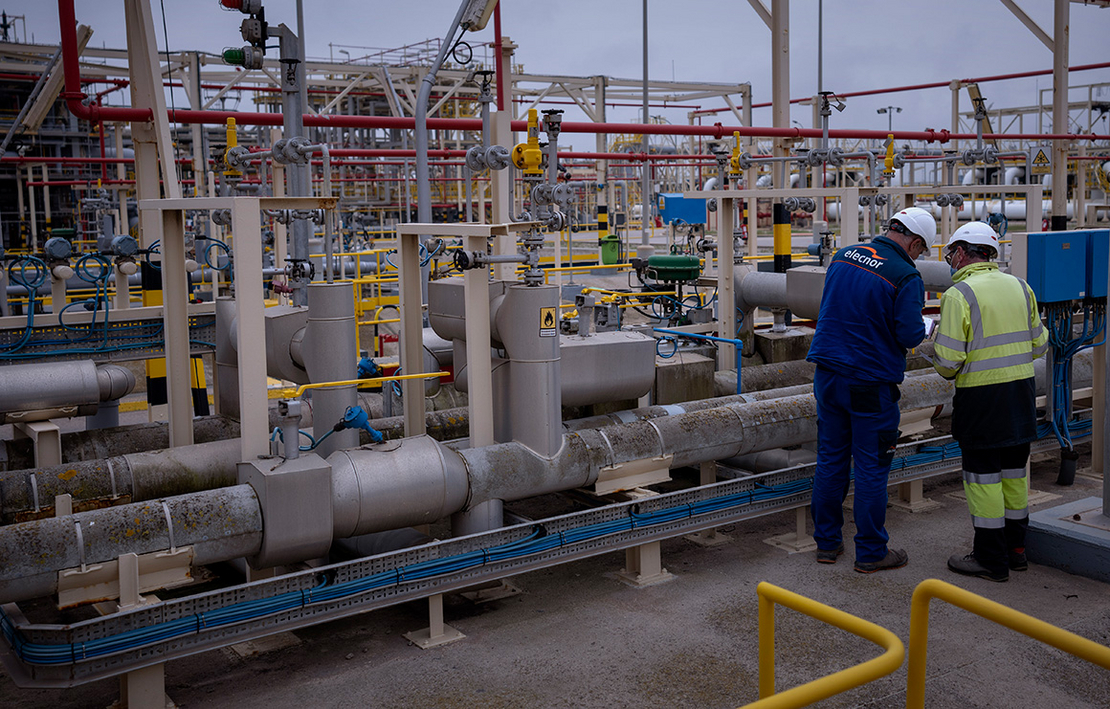 The first, a sweeping $315 billion proposal for weaning Europe off Russian gas, came in response to the invasion of Ukraine and called for measures ranging from doubling solar photovoltaic capacity in three years to a ramp up in renewable hydrogen. The “REPowerEU” plan from European Union officials also would advance the continent’s efforts to start importing more liquefied natural gas, but those increases must be “coupled” with efforts to reduce the venting and flaring of methane.

“To that end, the EU will cooperate with its fossil fuel supply partners to reduce methane emissions,” the plan stated.

The methane provisions could put pressure on U.S. producers exporting to Europe who have resisted tight restrictions on emissions, according to observers.

“The U.S. does not look especially good in this regard, so this should send an added signal to gas producers in the Permian and beyond to clean up their act,” said Peter Erickson, Climate Policy Program director for the Stockholm Environment Institute.

The U.S. energy industry ranks third in the world for methane emissions, according to the International Energy Agency. Methane is the main component of natural gas.

The U.S. released 17 million tons last year of the greenhouse gas, more than any country other than China and Russia (Climatewire, Feb. 23).

The RePowerEU package, which calls for more efficient use of fuels and a faster rollout of renewable power, is aimed at depriving Russia, the E.U.’s main supplier of oil, natural gas and coal, of tens of billions in revenue. But it also stresses strengthening E.U. climate policies.

“We are taking our ambition to yet another level to make sure that we become independent from Russian fossil fuels as quickly as possible,” European Commission President Ursula von der Leyen said in Brussels when announcing the plan.

The bulk of the spending is devoted to transitioning to new sources of energy, said Ruth Liao, LNG editor of the Americas for ICIS, a price-reporting agency. Only about $10 billion of the plan will be dedicated to gas and LNG projects.

Yet the plan acknowledges a need to import more natural gas for now to avoid sharp disruptions to Europe’s economy, even as it repeatedly stresses the strong desire to wean off gas much more thoroughly, if not entirely.

Reducing methane is particularly important for avoiding the worst effects of climate change as scientists say the Earth is heading for a tipping point in just a few years. The short-lived, but potent, greenhouse gas traps 80 times more heat in the atmosphere than carbon dioxide in the first 20 years after it is released.

The LNG industry in the United States has expressed hope and desire to ship more gas to Europe. But it’s unclear if yesterday’s plan will send a message that encourages the long-term investment those companies say they need.

“We continue to wonder whether European parties are willing to use this mechanism to ink contracts of sufficient duration to encourage LNG project final investment decisions,” ClearView Energy Partners LLC wrote Tuesday in an analyst note after a draft version of RePowerEU was published by POLITICO.

While it tracked closely with the an earlier agreement from the United States and Europe on LNG, those advocating for faster decarbonization expressed alarm at the amount of new natural gas infrastructure the plan suggested.

Research group Global Energy Monitor has said 22 LNG terminals, expansion projects and other gas projects have been announced, proposed or revived in Europe since February of this year. The projects would boost import capacity by at least 152 billion cubic meters per year, it said.

“This potential capacity increase is significantly at odds with recent analysis showing that the EU has enough gas import capacity — both operating and in development prior to the war in Ukraine — to get off Russian gas,” according to a post earlier this week from the group.

Others say the investment in new infrastructure is simply being realistic.

The plan, said Paul Bledsoe, a strategic adviser with the Progressive Policy Institute, “combines extremely ambitious renewable energy build-out goals with a recognition that Europe will need much more U.S. LNG to displace Russian gas and avoid increasing emissions from additional coal use.”

The methane element of the plan appears to be an attempt to dispel the idea that Europe will look past methane emission problems in order to kick its Russian gas habit. That issue arose prior to the Russian invasion of Ukraine, when French firm Engie SA stepped away from a $7 billion deal to buy LNG, reportedly over concerns about the methane emissions footprint of U.S.-produced natural gas. But earlier this month, it announced it is buying LNG from the same export project (Energywire, May 3).

Some have said criticisms of the United States for its methane emissions are hypocritical, considering Europe is dependent on Russia, where aging gas infrastructure can leak more methane than its U.S. counterpart (Energywire, May 13).

The methane provisions of the plan, included in a supplemental report, cited an IEA estimate that at least 46 billion cubic meters of natural gas is lost globally every year from venting and flaring.

It suggested that the E.U. might prioritize imports of gas that would have otherwise been vented, and said E.U. officials were willing to provide assistance to set up “you collect/we buy” schemes.

“I think when gas prices are $4.57 a gallon on average, that is the acceleration to clean,” Granholm said, appearing virtually at the start of POLITICO’s Sustainability Summit.

Granholm said accelerating the U.S. transition to clean energy is “not just for the climate,” but something that people see as “a national security imperative — that we have to be energy secure and using our own homegrown energy, and especially clean energy so that you’re not buying something on a global market, but you’re producing it at home, is the answer.”

On the heels of the European Union’s massive plan to diverge from Russian fuel reliance, several of its member countries yesterday also committed to a tenfold increase in offshore wind energy in the North Sea by midcentury.

It’s a goal that overshadows President Joe Biden’s more modest attempt to support offshore wind, but both Europe and the United States face many of the same hurdles, experts say.

Germany, Belgium, the Netherlands and Denmark will increase their offshore wind capacity to at least 150 gigawatts by 2050, leaders of the northern European nations announced yesterday. That’s enough to power 230 million homes — more than the current number of households in Europe.

“The EU must become independent from Russian fossil fuels as fast as possible and the best way forward is for the European countries to work together to scale up and speed up the buildout of renewable energy in the North Sea,” said Dan Jørgensen, Danish minister for climate, energy and supply, in a statement.

The countries have an interim goal to reach at least 65 GW by the end of the decade. They also committed to creating an additional “energy island” in the North Sea, a man-made hub for energy production offshore. Denmark committed to building the first last year.

The commitments have pleased some green activists, who say offshore wind is a part of a larger push to decarbonize in the face of climate change.

“Large amounts of green power are crucial for Danish and European climate action,” said Christian Ibsen, CEO of the Danish green think tank CONCITO, in a statement. “The need for green power is urgent and will increase significantly in the coming years.”

Wood Mackenzie estimated in a report released yesterday that $1 trillion will flood into the offshore wind space over the coming decade due to a ninefold increase in offshore wind capacity, with 330 GW reached worldwide by 2030 compared to just 34 GW installed at the end of 2020.

That boom includes the U.S., where the Biden administration has committed to lifting 30 GW of offshore wind by 2030 — powering the first full-scale offshore wind arrays in the U.S.

Northern Europe’s new ambitions, however, could spur the U.S. to do more in the years ahead, some said.

Mike Williams, a senior fellow with the Center for American Progress’ energy team, said Europe has long been the leader in this space, with the U.S. following in its footsteps. Now, for the U.S. to stay competitive in the supply chain amid a rush of global offshore wind growth, leaders stateside should be considering how to move beyond the 30 GW goal.

Williams said initially the U.S. is going to be reliant on European companies as it builds out its own supply chain, but with the E.U.’s accelerated pace, global manufacturers are increasingly going to face a choice of where to locate and invest, in the E.U., Asia, or the U.S. he said.

“The administration really pushed us out way farther than we’ve been. But to be frank, to meet future energy needs and to meet the climate crisis head on, we’re gonna need to keep striving for more,” Williams said.

The European growth may make it difficult for the U.S. to meet its own targets, warned Sam Salustro, director of coalitions at the Business Network for Offshore Wind.

“Growing global demand will exacerbate the intensifying competition for a limited supply of components, vessels, and expertise, and this supply chain crunch threatens our ability to construct U.S. projects on our own timelines and could harm the emerging U.S. industry,” he said in an email.

Salustro said the solution is for the U.S. to “match global growth with equal intensity to build out a domestic supply chain of manufacturers, suppliers, and logistical hubs.”

The growth on both sides of the pond could face additional challenges, however, with difficult permitting processes to get the huge energy projects online.

“Slow and complex” permitting is noted in the commission’s road map as a principal obstacle for wind and other renewables to meet E.U. targets. The commission deems renewables in the public interest and simplifying permitting “a matter of urgency.”

The permitting drag is mirrored in the U.S., where earlier this month, Biden announced an “action plan” to speed up environmental reviews for energy and infrastructure projects. While the details are not yet clear, the approach echoes the longtime position of many Republicans on the opposite side of the climate issue, who complain the nation’s bedrock environmental laws like the National Environmental Policy Act can get in the way of rapidly expanding energy.