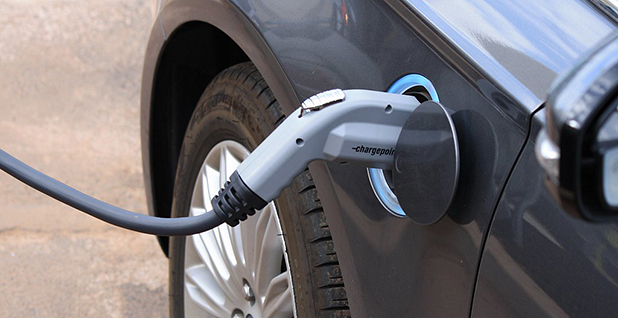 The CEO of Consumers Energy and other utility executives see electric vehicles as a grid asset, not a liability, if cars are plugged in during off-peak hours. NoyaFields/Flickr

On a whiteboard, she draws a straight line that gives way to a few big spikes that represent hot summer days when air conditioners are blowing and electricity demand peaks across the utility’s service area, which spans much of Michigan’s Lower Peninsula.

"We have this super-duper summer peak, and it’s literally a couple of hours a year," she said in an interview with E&E News earlier this month. "It doubles our demand. The rest of the time we have almost double the capacity required across the entire grid."

For utility CEOs like Poppe, the goal is to flatten those peaks in demand, or "load," into rolling hills or, ideally, something closer to a flat line. Their ability to do so has big consequences for pocketbooks and the climate, because fossil fuels supply much of the peak power during those few critical hours.

Poppe, who spent 15 years at General Motors before moving to the utility business, sees EVs as an ally in that quest to flatten out electricity demand.

Reductions in energy use and programs that compensate customers for reducing energy use at critical times can help the utility avoid building natural gas plants. And demand from EVs during evenings allows the utility to better use existing power plants and transmission lines — assets that customers pay for regardless of how much use they get.

The end result can be lower electric rates and a reduction in tailpipe emissions.

"My message over and over again is that every electric vehicle that is added to the grid, as long as it is not charging on peak, lowers the average cost of electricity," Poppe said.

"If we can smart charge [EVs] and optimize heating and cooling with a smart thermostat and a smart meter, we can, for the first time ever, optimize demand."

Optimized demand, or "flexible load," is a buzzword in the electric industry these days and refers to electricity demand that can be steered to a time of day when it’s most optimal for the grid.

‘The only thing that matters’

Aligning demand with hours of the day when power is cleanest and cheapest can pay big dividends, said Jim Lazar, a senior adviser to the Regulatory Assistance Project, a nonprofit that works with regulators and policymakers. And it can go a long way toward enabling the integration of more carbon-free wind and solar energy.

Lazar said EVs are one of three main sources of flexible load, along with air conditioning and water heating. The key to integrating EVs with the grid is guiding owners with the right price signals to charge during off-peak hours.

"As long as utilities and their regulators are smart about it and make sure time-varying rates are available to customers at a reasonable cost," EVs can be a grid asset, he said.

There are different ways to do that like time-varying electric rates or utility load control programs, such as Xcel Energy Inc.’s residential EV service pilot in Minnesota, where the latest available data showed 96% of charging occurred off-peak, Lazar said.

Consumers Energy likewise has found success incentivizing customers to plug in their cars during off-peak hours as part of an EV time-of-use program, Poppe said.

"It works," she said. "With the proper price incentives people will charge off-peak, which is the only thing that matters."

A study released earlier this year by an Illinois consumer group illustrates just how much it matters.

The study by the Chicago-based Citizens Utility Board (CUB) is based on data reflecting actual electricity-use patterns in Illinois and shows that consumers in the state could save $2.6 billion on their electric costs over the next decade if the right policies are implemented to encourage EV owners to plug in cars during off-peak hours when electricity is cheapest.

By contrast, if nothing was done to encourage smart charging and EV owners charged during peak periods, adding stress to the grid, power bills in the state could rise by $856 million.

"All customers can benefit from EVs on the grid if they charge at optimal times so they add no cost to the system," said Martin Cohen, a former Illinois utility regulator who led the study. "But it takes a public policy focus and the utilities and stakeholders and regulators working together to figure it out."

Time-varying rates have been available to customers of Illinois’ two largest investor-owned utilities for more than a decade. Cohen is a customer and takes advantage of low overnight power prices to charge a plug-in hybrid.

But uptake for the hourly electricity pricing plan has fallen short of expectations, leading state regulators to approve a tiered rate plan last week. The plan, proposed by Commonwealth Edison with input from CUB and the Environmental Defense Fund, offers similar benefits, including the ability to save money by charging EVs overnight.

In addition to the savings, the combination of EVs and off-peak charging helps slash tailpipe emissions, displacing gasoline molecules with electrons from an increasingly cleaner generating fleet.

Even today in Michigan, where just over half of Consumers Energy’s electricity comes from coal and natural gas, carbon emissions from EVs are lower than emissions from gasoline-powered cars. Those benefits will only widen as the utility phases out its remaining coal plants and adds more renewable generation, the company said.

Michigan regulators in June approved a long-range plan that calls for Consumers Energy to add more than 6 gigawatts of new solar over the next 20 years, including 1.2 GW by 2021, as it continues to phase out coal use (Energywire, June 10).

Back at the whiteboard, Poppe emphasizes the importance of making sure thousands of new EVs added to Michigan highways in the coming years plug in during off-peak hours.

The utility has already avoided building one new natural gas-fired power plant, and if the company can execute its plan to transition to cleaner energy and reduce peak use, it can similarly scrap plans for two more.

By reducing those energy peaks, "we have headroom to add 20% electric vehicles without having to add another power plant," she said.