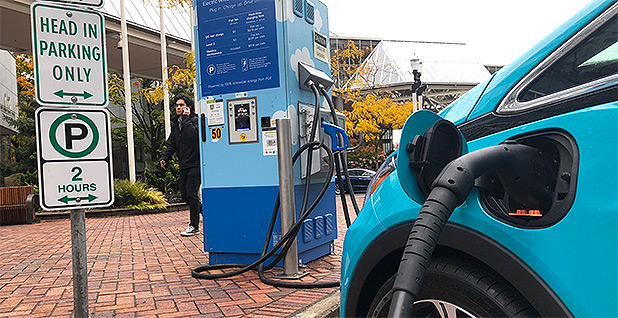 PORTLAND, Ore. — Ask Charlie Allcock what makes Portland a haven for electric vehicles and he harks back to the 1970s, when the city did one of the quirky, out-of-step things that Portland often does. It took coveted federal highway dollars and instead of using them to build a freeway, built an electric light rail — decades before congestion and pollution sent other cities in the same direction.

"This one has lived in the psyche of Portland and Oregon for a long time," said Allcock, who until last year was director of business development for Portland General Electric (PGE), the region’s main power company. "You’ve got these things that set an agenda and a soul here."

Portland has a role in electric vehicles that belies its relatively small size. PGE has lent its name to one of the biggest public-charging networks in the country. A local nonprofit created what has become the country’s biggest EV conference. And that holy grail of economic development — vehicle manufacturing — arrived earlier this year when Daimler announced it would build its first electric freight trucks here.

Its population of fewer than 700,000 makes it smaller than any major metropolis to the south in California, and it lacks the economic heft of its Amazonian neighbor to the north, Seattle. But it does have a small-city nimbleness, combined with a predilection for taking the plunge first.

Or, put another way, "Portland has always embraced the oddball stuff," said Gary Exner, the president of the Oregon Electric Vehicle Association. "And Portland has plenty of that."

Portland General Electric has one of the longest histories with EVs of any utility in the country. It was one of the first utilities to build EV charging stations, six of them, around its territory.

In 2008, the governor of Oregon, Ted Kulongoski (D), went on a trade mission to Japan and test-drove a new electric Nissan that as yet had no brand name. Shortly thereafter, Nissan’s then-CEO, Carlos Ghosn, announced that Portland would be one of the first test markets for the Leaf, the first mass-market electric car in the United States.

In 2010, PGE rolled out the first public fast charger in the country; the following year, it launched Electric Avenue, the first U.S. network of public charging stations, with a mixture of fast-charging ports and slower chargers. The program has expanded, with three locations in operation and three in development.

One of the few annual EV conferences in the country is called Roadmap, held every June at the Oregon Convention Center on the bank of the Willamette River. Two years ago, 600 people attended; last year, it was 800; this year, it was 1,000.

Next year, it will be several times that — somewhere between 3,000 and 10,000 — when it simultaneously runs the International Electric Vehicle Symposium, the world’s largest EV convention, held most recently in France and Japan.

The conference, like PGE’s charging network, is the result of locals taking the lead, said Jeff Allen, the executive director of Forth Mobility, an Oregon nonprofit that puts on the meeting. "What I see in a lot of states that want to do this is nobody wants to own it," he said.

Portland’s homegrown interest in electric vehicles translated into economic development earlier this year, when Daimler Trucks North America announced that it would build its first electric freight trucks at its Portland factory.

That factory, which has long been the manufacturing site for Daimler’s Western Star line, will also build the Freightliner eM2, a medium-size electric model, and the Freightliner eCascadia, a full-size model. Delivery dates and production numbers are not yet available, said Daimler spokesman Fred Ligouri.