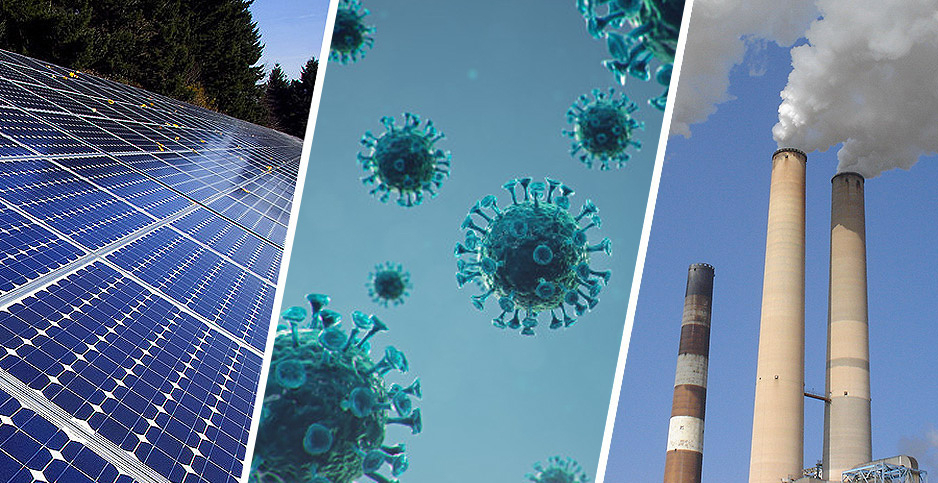 Renewable sources of energy like wind and solar have been the surprise winners of the coronavirus crisis, feeding the electric grid at higher levels while coal has stumbled. Oregon Department of Transportation (solar); Freepik (coronavirus); public domain/Wikipedia (power plant)

As coronavirus lockdowns encircled the globe from January to March, stifling economic activity, something surprising happened on the electric grid. Renewable energy had the romp of its short life, while coal withered.

The two trajectories — stunning in their speed and scope, especially in parts of the United States — happened because demand for electricity suddenly evaporated.

As the world wonders how long it will take the economy to recover, the renewables-and-coal phenomenon poses other questions. A long or short recession equals a long or short trough in electricity demand. What energy sources will emerge either healthy or sick? How will the coronavirus crucible change electricity’s carbon emissions?

And what exactly changed when COVID-19 swept the world?

An International Energy Agency report from late April documented the change. In the first quarter of 2020, as China endured its lockdown to stem the spread of the coronavirus and similar efforts started in Europe and the United States, electricity demand around the globe dropped by a historic 2.6%.

A drop that precipitous should punish every kind of fuel, and mostly it did. Coal especially was "squeezed on all sides," the report said, as its generation for power plummeted by 10%.

Every source, that is, except for renewables, which even amid a massive downturn saw their generation jump by 3%.

"In all regions that implemented lockdown measures," the report said, "the electricity supply underwent a notable shift towards low-carbon energy sources."

The main reason was the price of fuel.

Grid operators found themselves in a buyer’s market with more options than they had ever seen in an economic downturn. In addition to the coal, natural gas, hydro and nuclear that have been mainstays for decades, they had available gigawatts of wind and solar farms that have come of age since the 2009 recession.

With operators required to deliver electricity at the cheapest cost — and sometimes required by government policies to prefer them — renewables came out the winner.

"Wind and solar come in first because there is no additional cost for them to generate that power," said Seth Feaster, an analyst at the Institute for Energy Economics and Financial Analysis who studied how energy sources have stacked up in the United States during the COVID-19 downturn.

"They can compete at almost any price," he added.

All power plants have a cost to build, but renewable plants are alone in that their fuels — sunshine and wind — generate no invoices. Having fewer moving parts means they also have less need for repair and maintenance.

"You’ve got to put coal into a coal plant, and you’ve got to buy coal. The renewables are essentially free to keep generating," said Nathanael Greene, a senior renewables advocate at the Natural Resources Defense Council. "There’s a significant cost to keeping coal up when those two technologies are competing."

This global story is perhaps most apparent in the eastern United States.

In the area served by PJM Interconnection LLC — the regional transmission organization that encompasses 13 Eastern states and 65 million customers — the paths of renewables and coal during the coronavirus emergency have resembled a yin and a yang.

There was a stretch in April and early May of 40 days in which renewables outgenerated coal every single day, the Institute for Energy Economics and Financial Analysis found. That’s more than twice the number of days the prior year, and remarkable considering coal’s traditional dominance in the region.

IEEFA was not alone in noticing the trend. The research firm IHS Markit concluded that in March and early April, the volume of coal generation in PJM dropped by 40%, while generation of solar soared by 45%. Markets around the world saw the same phenomenon, but not as pronounced.

The electricity trough of 2020 is compounding a difficult situation for coal. It has been in steady decline since the last recession, and the coronavirus emergency is adding downward momentum.

On Monday, the U.S. Energy Information Administration reported that in 2019 — before the coronavirus outbreak — electricity generation from coal dropped to its lowest level in 42 years, and had its steepest percentage decline in history.

Hundreds of coal miners have been laid off from Wyoming to Kentucky in the last few weeks as mines closed, at least temporarily, because of rock-bottom prices for their product.

"It has been a challenging start to 2020 and among the most complex global backdrops in my more than three decades in the global resource industry," said Glenn Kellow, CEO of Peabody, on a recent quarterly earnings call. He went on to say any mines that couldn’t make money in this punishing environment would be shut down.

An economy in recession uses less electricity because offices are shuttered and factories turn out fewer goods. A coronavirus recession will probably be no different.

It isn’t good for anyone, analysts said, because stagnant or declining electricity use means that few new power plants of any sort need be built.

But any advantage to be had will go to renewables, analysts say.

IEA projected what would happen if a global recession dominates 2020. It assumed that global gross domestic product would decline by 6%, which is in line with International Monetary Fund projections made last month. IEA made a glum forecast for electricity demand: down by 5% this year, eight times the decline from the 2009 Great Recession.

"All fuels except renewables are set to experience their greatest contractions in demand for decades," the IEA report said. But renewables are expected to grow, regardless of how the recovery plays out.

On domestic shores, data from EIA is similar. In data out this week, it projects that electricity generation will drop by 5% this year. Coal generation could plunge by a stunning 25%, with natural gas staying flat and renewables growing 11%. Taken together, the trends mean 2020 is likely to be the first year that renewable energy generation overtakes coal.

This crush of renewables will tighten a vicious cycle that coal has found itself in for years now.

As cheap natural gas and no-fuel renewables make coal the most expensive choice, coal plants run for fewer hours. Each hour becomes more costly to run, because many of the plant’s costs are fixed regardless of how often it is used.

The COVID-19 recession will only quicken this cycle.

"It will accelerate coal being pushed out of the market," Feaster said. "If power demand does stay low, depending on how long it stays low, you will see more retirements of coal plants and more investment in renewables."

More renewables equals lower carbon emissions, which is good for the climate — but the continued survival of coal plants could be good for customers’ pocketbooks, said Jim Thompson, the executive director of coal for IHS.

He explained that much of the natural gas produced in North America is a byproduct of oil drilling, known as dry gas. As oil prices have crashed during the current crisis and oil wells are abandoned, dry gas will disappear with it, and that will cause natural gas prices to rise into next year.

If coal has been decimated, with mines closed and its miners dispersed, to the point that it can’t recover in 2021, the result will be higher prices for customers.

"I think that after a miserable year in 2020, that consumers will probably not be too happy with a jolt in their monthly electric bill," Thompson said.

In the midst of this downturn, the research firm Wood Mackenzie raised its projections for the future of solar, "driven by improving cost-competitiveness and sustained investor interest," according to Ravi Manghani, the head of the solar practice. Solar power will deliver 5 GW more electricity to the grid over the next five years than the firm had expected earlier.

And in that growing market, the United States might be a bright spot.

IHS estimates that the coronavirus recession and its hit to electricity demand will cause big, utility-scale solar installations to decline around the world this year, and plunge by 45% in Europe. But in the United States, they could grow 16%.

Whether the economy and electricity demand bounce back quickly or slowly hardly matters.

"Either way, the trajectory for renewables is quite positive," said Edurne Zoco, executive director of the clean technology and renewables team at IHS. "The loser will continue being coal."

Correction: An earlier version of this story incorrectly stated that Glenn Kellow, the CEO of Peabody Energy Corp., is soon leaving his position.