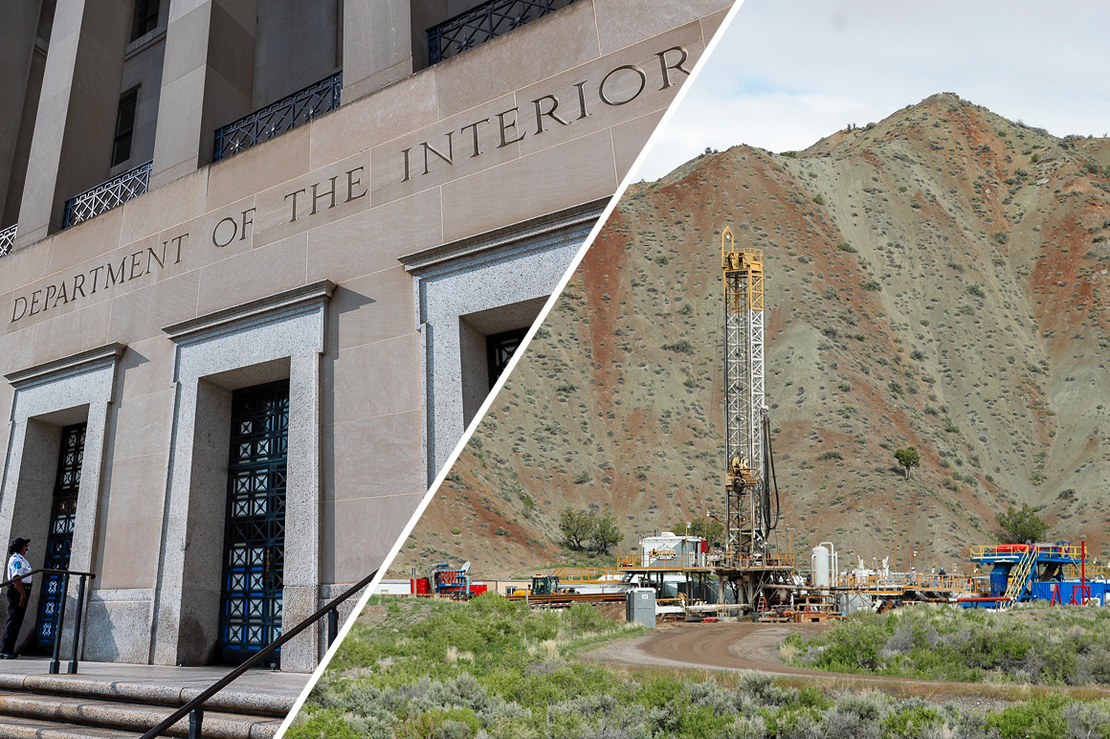 After Sen. Joe Manchin sent climate negotiations into chaos on Capitol Hill last week, the pressure is on President Joe Biden to take his own concrete steps to halt global warming, like toughening his stance on drilling for oil on public lands.

The West Virginia Democrat waffled ahead of the weekend on whether he will support climate spending in ongoing negotiations over the reconciliation package that Democrats are trying to get passed ahead of the midterm elections — when the GOP is predicted to gain spots in Congress. He blamed inflation for his position.

The political jockeying puts in doubt a legislative answer to Biden’s critical climate ambitions, such as the $300 billion in clean energy tax credits on the table in recent negotiations.

But a slammed door in the Senate could also free the White House from having to appease Manchin, who’s made no secret from his bully pulpit as chair of the Senate Energy and Natural Resources Committee of his frustration with the White House’s response to high gas pump prices and its slow walking of federal oil and gas leasing.

“If the White House has been modulating its oil and gas policy in recent months to woo Manchin’s support for clean energy incentives, then his latest defection could augment a post-election green pivot, including further strictures on federal lands,” said ClearView Energy Partners LLC in a client note Friday.

Last week, The Washington Post reported the White House was considering Manchin as it decided whether to approve a controversial oil drilling project in the Arctic and future drilling access in federal waters in the Gulf of Mexico.

But by Thursday night, Manchin had quashed hopes of major climate spending. He pivoted again the next day by saying he might be open to talking about a deal in September — if the country’s inflation picture looked better (Greenwire, July 15).

“I can’t make that decision basically on taxes of any type and also on the energy and climate because it takes the taxes to pay for the investment in the clean technology that I’m in favor of,” he said in a recent interview with West Virginia’s MetroNews. “I’m not going to do something and overreach that causes more problems.”

The stance has sparked controversy on the political left, with prominent progressives like Sen. Bernie Sanders (I-Vt.) accusing Manchin of sabotaging climate talks because he is beholden to fossil fuel companies.

“We continue to talk to Manchin like he was serious. He was not. This is a guy who is a major recipient of fossil fuel money,” Sanders said yesterday on ABC News’ “This Week with George Stephanopoulos.”

Regardless of whether Manchin eventually jumps on board, environmental groups and many Democrats on Friday emphasized that the stalled negotiations should put the emphasis back on other tactics the Biden administration could deploy to meet its climate goals.

This could involve taking bold steps in management of the federal oil program, such as opting against some, or all, new offshore leasing for the next five years or killing ConocoPhillips’ Willow project on federal lands in the Arctic, which would be capable of producing fossil fuels for decades.

The federal oil program was once a focus of Biden’s climate and clean energy platform — he pledged during the campaign to end new leasing. Since then, however, the administration’s approach to the program has become entangled in political discord and litigation.

Additionally, Biden seems to have grown more ambivalent about public lands oil policy with rising energy prices in the wake of Russia’s invasion of Ukraine. The president has spoken out in favor of U.S. drilling to dampen prices at the pump and asserted that he is not standing in the way of U.S. oil production on public lands, despite industry’s accusations.

With a legislative climate package on life support — if not dead — the administration is out of excuses to return to its original pledges, said Brett Hartl, government affairs director at the Center for Biological Diversity. The group has put out a list of executive actions the president could take, such as declare a climate emergency, use legislation to drive electrification in the transportation sector, establish an export ban on crude oil and gradually retire the federal oil program.

“We certainly hope that the Biden Administration will take bolder action administratively now,” Hartl said in an email. “The Department of Interior has enormously powerful tools at its disposal to clamp down new oil and gas leasing, and to phase down production of fossil fuels on public lands and waters.”

“Biden must take matters into his own hands by declaring a climate emergency and immediately moving to halt new drilling and fracking on federal lands and waters and denying the approval of new fossil fuel pipelines and infrastructure projects,” she said.

For his part, the president on Friday said he would move forward on his own without legislation, but did not specify what that would look like.

“If the Senate will not move to tackle the climate crisis and strengthen our domestic clean energy industry, I will take strong executive action to meet this moment,” Biden said in a statement (E&E News PM, July 15).

The president reiterated this general promise yesterday when asked about the failed negotiations.

“I’m going to use every power I have as president to continue to fulfill my pledge to move toward dealing with global warming,” Biden said.

While climate negotiations have pivoted around Manchin, some observers said the senator may have had less of a role in influencing Biden administration decisions than other political catalysts — such as inflationary energy prices.

Morgan Bazilian, director of the Payne Institute for Public Policy and professor of public policy at the Colorado School of Mines, predicted that federal drilling policy will continue to take a back seat to the administration’s strategies to lower prices with global levers, like urging OPEC to raise production.

“Drilling on federal lands is part of this, but not something that makes an immediate impact,” he said. “It is also not likely to play a huge role going forward.”

From that perspective, little may have changed in the last few days for the public land oil outlook, and Manchin’s importance may be overblown.

“It’s not just Manchin,” said Christopher Guith, senior vice president of the U.S. Chamber of Commerce’s Global Energy Institute, in an email, pointing to other powerful lawmakers the administration may be keeping in mind, like Sen. Lisa Murkowski (R-Alaska), who’s proved influential with this administration, even forcing them to swap out an Interior nominee she was opposed to (E&E Daily, April 15, 2021).

Guith said he also didn’t buy that the White House’s recent actions on significant federal oil policies, like “kicking the can” on the release of a final offshore oil and gas schedule until after the elections, had anything to do with concessions for Manchin.

Earlier this month, the Interior Department announced it was penning a new oil and gas lease schedule off the nation’s coasts that could end in polar opposite policies — either zero out the practice for five years or include up to 11 new sales between 2023 and 2028. Far from smoothing relations, the mere consideration of ending leasing aggravated the oil industry — and Manchin — while the indecisive plan won the administration few points from frustrated conservationists.

With the Willow project in the Arctic, which has the support of Murkowski, the administration similarly suggested it could block drilling entirely or approve a slightly reduced project.

In both cases, a final decision isn’t expected until late this year or early next year. But these high-profile decisions showcase the decidedly noncommittal approach by the Biden administration when it comes to the future of oil and gas on federal lands and waters.

Frank Maisano, a senior principal at law and lobbying firm Bracewell LLP, which represents clients in energy industries, said the White House has been stuck in a political bind between high energy prices and climate activism.

“You can have a strategy that is trying to duck away. And I think that’s what their strategy is,” he said. “They know, whichever way they go, they’re gonna get a punch.”

It’s not yet clear how failed climate legislation would influence the current doldrums on federal oil and gas policy. The Interior Department declined to comment for this story.

Manchin’s position aside, ClearView said the agency may have already been planning to accelerate energy transition policies once elections have passed — both boosting renewables and more boldly restricting oil and gas.

On federal lands, the Bureau of Land Management said it has no updates on scheduling new sales onshore after holding a suite of modest auctions last month under a court order. Kathleen Sgamma, president of the Western Energy Alliance, said she doubts that unofficial leasing pause will lift unless the administration is forced to continue leasing by a federal judge.

Instead, Sgamma said the White House may feel increased pressure to ramp up regulations on oil companies — “regulations that they’ve been neglecting in hopes that Congress would save them with a legislative fix.”

The administration had already pledged to move forward with more incremental reforms of the federal oil and gas program. By early next year, Interior has promised to propose an overhaul of oil and gas regulations, touching on bonding, royalties and fees, a goal that was originally scheduled for this summer (Energywire, April 26). It’s also promised to release new methane rules for oil and gas operations in the federal oil patch.

Often opposed by industry, such reforms have long been sought by conservationists and environmental groups. But in the climate-aware landscape of today’s policy debates, they are also viewed as disappointingly small measures.

Jeremy Nichols, the climate and energy program director for WildEarth Guardians, said activists want to hold the White House to action on climate policy regardless of the political backlash the president is facing.

“We’re not going to cut him a free pass because things got hard,” Nichols said of the White House — prior to the news of Manchin’s potential defection. “This is hard stuff.”