How many regs could it take to launch ‘Green New Deal’? 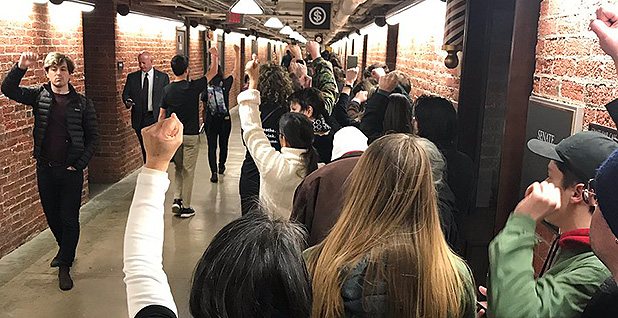 Activists calling for a "Green New Deal" crowded hallways on Capitol Hill today ahead of a planned Senate vote. @sunrisemvmt/Twitter

The aim of the "Green New Deal" to remake the U.S. economy has experts in government regulation guessing how the proposal could shape the scope of the nation’s environmental standards.

Progressives have laid out an ambitious plan for advancing renewable energy and green infrastructure across the United States to help reach zero net global emissions by 2050.

While much of the discussion focuses on government investment, some regulatory experts say the "Green New Deal" would require a whole new host of federal rulemaking to aggressively slash greenhouse gases.

They point out that implementing Obama-era climate rules currently on the chopping block wouldn’t be enough for the type of deep decarbonization the "Green New Deal" would advance.

Other analysts see rulemaking taking on a more complementary role that could bolster the proposal’s programs but would not be a central component.

Jessica Wentz, a senior fellow and associate researcher at the Sabin Center for Climate Change Law at Columbia Law School, said, "To achieve the goals in this proposal, we would need regulation that is more comprehensive and ambitious than anything we’ve seen to date."

Such a revival of regulatory action would follow and undo the Trump administration’s aggressive and ongoing rule-busting efforts.

Backers acknowledge the potential role of rulemaking in achieving these objectives, without getting into specifics of how that would work in practice.

The nonbinding resolution from Rep. Alexandria Ocasio-Cortez (D-N.Y.) and Sen. Ed Markey (D-Mass.) talks broadly about how the federal government needs to account for "the complete environmental and social costs and impacts of emissions," which could be done through existing laws, as well as new policies and programs.

Rhiana Gunn-Wright, policy director of the New Consensus, a progressive think tank aimed at fleshing out the policy details of the "Green New Deal," offered few hints of how regulations would advance the proposal’s objectives.

In a recent interview on the "Columbia Energy Exchange" podcast, she noted that New Consensus often fields questions about how federal environmental and efficiency standards would fit in.

"We think those will likely be tools," she said. "We are not gonna come out and say, ‘These are the things that we need,’ because the goal of the ‘Green New Deal,’ beyond putting it forward, the goal of New Consensus process is really a collective solution."

The lack of detail belies the importance of regulations to sustaining broad emissions cuts across the U.S. economy, some analysts say.

Dan Bosch, director of regulatory policy at the American Action Forum, contended that government incentives to switch to greener practices — like converting existing buildings to energy-efficient building designs — could get results in the short term.

But, he said, the federal government would eventually need regulation to spur businesses and individuals still unwilling to act voluntarily.

"The plan as written, the resolution, seems heavily reliant on these subsidies and incentives, but what they don’t articulate is the point I just made, which is you are going to need to compel action," he said.

That would include implementing rules like EPA’s Clean Power Plan and the Bureau of Land Management’s methane guidelines for oil and gas.

It would mean boosting the Department of Energy’s efficiency standards for appliances, lighting and equipment and requiring net-zero emissions standards for passenger and light-duty vehicles.

Regulators would have to be "extraordinarily efficient" to secure changes, which can take agencies years to finalize and frequently face legal challenges that can delay implementation.

"Do we have a government that is capable of implementing what is necessary, in the time frame that is necessary? I don’t think we have any evidence of that on either the administrative side or the congressional side," Bosch said.

Returning to these rules may be unnecessary depending on the approach the federal government decides to take, said Wentz.

Congress and policymakers could decide to use existing rules or come up with new schemes aimed at reducing emissions.

One way agencies like EPA could use existing authority, said Wentz, would be to draft rules under Section 115 of the Clean Air Act, which addresses international air pollution.

Congress could establish a cap on greenhouse gas emissions or set some type of carbon pricing. The government could also set management standards to go along with direct investments and economic incentives, she said.

"Bottom line: I think it’s fair to say that the proposal would support regulation that goes far beyond enacting/reinstating/implementing the Obama era climate rules," Wentz wrote in an email.

An efficient approach would be to pass one bill aimed at enacting the "Green New Deal," because it could go after multiple sectors at once, said Derek Sylvan, strategy director at New York University School of Law’s Institute for Policy Integrity.

Such a bill would have clear goals and pathways to meet targets, which could then be put into place through regulatory approaches, he said.

One potential model might be America’s Water Infrastructure Act of 2018, S. 3021, which sought to incorporate local input into projects and safeguards to make sure state infrastructure spending meets specific criteria, Sylvan said.

Mark Antoniewicz, communications director at the Hip Hop Caucus, which has been working with the Sunrise Movement to promote the "Green New Deal," pointed to recent Washington, D.C., action to promote clean energy as an example of communities around the country often doing more than the federal government.

"In Texas and Iowa, all the renewable energy stuff that is going on is really incredible right now. My point being, making sure the best of these community-based solutions are making their way up to the top of what will be in the ‘Green New Deal,’ that is the priority," he said.

Sylvan said that the current resolution is a "promising step" toward setting high-level climate goals, but that a lot of details still need to be worked out. He acknowledged the complicated politics of passing ambitious legislation to spur net-zero emissions.

"Existing technology could get us a significant portion of the way there in the time frame discussed in the resolution, but that requires a bill that actually gets passed," he said.