How Mark Kelly might shake up the Senate’s power balance 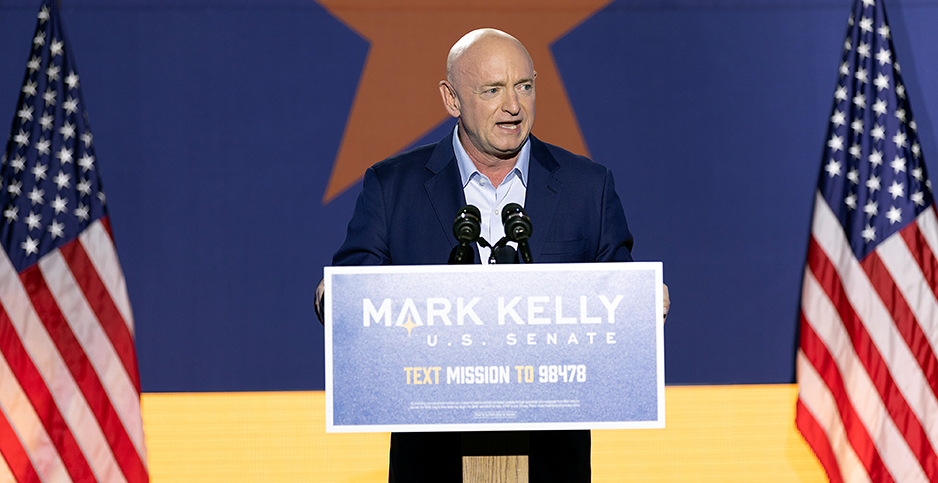 After campaigning as an independent problem solver, Arizona Democrat Mark Kelly is poised to get a head start on his pledge to fix a "broken" political system in Washington.

The former astronaut, 56, is set to be sworn in today to the seat once held by a personal hero — the late Sen. John McCain (R-Ariz.). Both were Navy pilots and combat veterans.

"It’s a big deal for me," Kelly told The Arizona Republic in a postelection interview posted last month.

"I mean, this is — John McCain is somebody that I looked up to when I was a 22-year-old pilot in flight school," he said. "He was the example of how you serve your country under the most challenging circumstances, and he was a hero of mine when I was young, and we often don’t get to meet our heroes. I think it’s also much less often that you eventually get to call him a friend, and to be elected to his United States Senate seat, that’s a very big deal for me."

Kelly’s immediate impact in the Senate will be a slight shift in the balance of power: While Republicans will still hold the majority with 52 seats, Democrats will now control 48 seats, complicating the GOP’s legislative calculus for an omnibus spending measure and possible COVID-19 relief package during the remaining weeks of the 116th Congress.

Should Democrats win both Jan. 5 Senate runoffs in Georgia and capture the majority in the new Congress, it will be in no small part due to Kelly’s 78,000-vote win over incumbent GOP Sen. Martha McSally.

But having been elected to serve out the final two years of McCain’s six-year term, Kelly will be on the ballot again in 2022 — ensuring that every move he makes for the next two years will be under the microscope.

Kelly’s path to Capitol Hill was an unlikely one.

The son of police officers, Kelly grew up in New Jersey before graduating from the U.S. Merchant Marine Academy and later the Naval Postgraduate School.

As a Navy pilot, Kelly was twice deployed to the Middle East during the first Gulf War. He flew 39 combat missions as part of Operation Desert Storm.

In 1996, both Kelly and his identical twin brother, Scott, were selected to be astronauts. Five years later, Mark Kelly flew the first of four missions into space aboard the Space Shuttle Endeavour, which he commanded on its final flight.

Kelly has spent more than 50 days in space and lived aboard the International Space Station, where his brother spent a yearlong mission. The twins now have the distinction of being the only siblings to have traveled into space.

Kelly’s life was forever changed on Jan. 8, 2011, when his wife, then-Rep. Gabby Giffords (D-Ariz.), was nearly assassinated in a shooting at a constituent event that left six dead.

The following year, Kelly resigned from NASA and the Navy and moved full-time to Arizona to help his wife recover from a traumatic brain injury sustained in the shooting.

"Gabby is the person who taught me about this side of public service, and what it means to use public policy to improve people’s lives — and who taught me to never, ever give up," Kelly said during an election night speech.

Kelly announced in 2019 he would challenge McSally to serve out the remainder of McCain’s final term. McSally was appointed to the seat on a temporary basis by Arizona Gov. Doug Ducey (R) after losing an earlier Senate race in 2018 to Democrat Kyrsten Sinema.

"I gave it my all, and I left it all on the field," McSally said during an emotional farewell speech last month.

Kelly and McSally sparred throughout the campaign over the Green New Deal, which Kelly said he opposed during an October debate in which he also called it "kind of silly" to phase out fossil fuels (E&E Daily, Oct. 7).

He’s spoken about personally witnessing the effects of climate change from space, and on his campaign website, Kelly noted the risks of unchecked warming to Arizona’s economy, noting the projected increase in 100-degree-Fahrenheit days in Phoenix and the risks to the state’s water supplies and public health.

He describes renewable energy as an "opportunity for Arizona," and has suggested that the number of renewable workers in the state could be tripled through "massive investments" in research and development to help make renewables more competitive.

"The only thing stopping us is irresponsible leadership in Washington," states Kelly’s website.

Kelly’s campaign did not respond to an interview request, but the senator-elect told The Arizona Republic last month that he hopes his committee assignments will reflect his unique background.

"I want my experience as a combat pilot, a veteran, an engineer, an astronaut to be able to help whatever committee I sit on, solve some of these problems we face," he said, adding that he was preparing to make his case to Democratic leaders for panel assignments that will be "focused on Arizona, but also focused on my own personal experiences."

The Armed Services Committee — which McSally sits on — "would make sense for that to be high on the list," Kelly said.

Another committee that McSally is a member of, Energy and Natural Resources, also has a long history of representation by Arizona senators.

Former GOP Sen. Jeff Flake served on the panel for a few years, as did McCain, who during hearings frequently raised the issue of the role of nuclear power in addressing climate change.

Those views were informed by the landmark carbon cap-and-trade bill McCain introduced with former Sen. Joe Lieberman (D-Conn.) in 2003.

Kelly said he’s spoken with McCain’s widow, Cindy, about obtaining the desk the legendary senator used for 33 years for his personal office.

Kelly also said he was struck by the intimacy of the Senate chamber, where he and other senators-elect gathered last month for orientation.

After 21 months of campaigning throughout Arizona, he said, "it’s sort of abstract, and then within a week, I find myself sitting there on the Senate floor, and that’s when it becomes just very, very real that the election is over, and now it’s time to get to work."